AN EXCERPT OF MATT MILLEN AND SEAN MCDONOUGH CALLING MSU/OSU

Share All sharing options for: AN EXCERPT OF MATT MILLEN AND SEAN MCDONOUGH CALLING MSU/OSU

Sean McDonough and Matt Millen called the Michigan State/Ohio State game this past weekend. They did NOT have a real good time, and it sounded a lot like this. 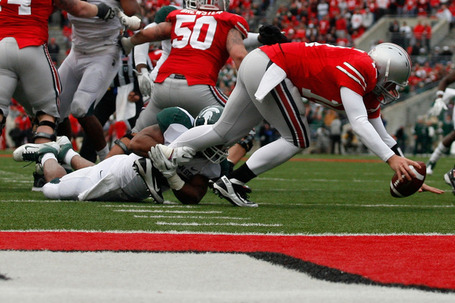 Sean McDonough: That was a horrible throw.

Matt McDonough: That was a fucking horrible throw, Sean. I would apologize to the crowd at home, but they get what they deserve for continuing to watch this.

Sean: Right on, Matt. Can't blame a dog for licking an electric fence.

[Ohio State drops a floppily thrown pass on 3rd down.]

Matt: Great catch if by catch you mean not catching the football.

Sean. That throw is telling a child their grandmother is in hell for being a whore at her funeral while making the dick-in-hole gesture with your fingers.


Matt: And nodding suggestively, too. Braxton Miller runs like a handicapped person who stole something but is also handicapped.

Sean: No argument here, though the handicapped may be offended at being compared to something that slow.

Matt: In the film room, they explained this play to us by saying that they wanted to get the ball to their guy in space, but also cut out the middle man by losing all yardage on first down to conserve energy.

[Due to time constraints, we fast forward in the action to the fourth quarter.]

Matt: Kirk Cousins is a very good quarterback but cognitively he is a Sun Bear with a learning disability.

Sean: The Ohio State defense has been confusing him with squeaky toys and honey-scented jerseys, according to our sideline reporter Jeannine Edwards. Let's go down to her on the field.

Matt: Dantonio can't coach, but he hates humanity with a burning passion and that's what makes him the moderately successful and extremely lonely person he is.

Sean: It's lonely at the top, Matt.

Matt: And lonelier still in an empty basement where you stare at your only friend, a burned Christmas tree you call Harald the Inconsolable.

Sean: I have a new respect for the punt today, Matt. It's the mercy flush of offensive plays in this game.

Matt: I'm sorry Sean, I didn't hear you. I was trying to swallow my own tongue.

Sean: Our words have no meaning, Matt. Punt coming up, not that it matters in the howling cold void of this world.

[On the ensuing Ohio State possession.]

Matt: Seems like ol Jim Bollman got into the grain alcohol a few quarters early today, Sean. Braxton Miller just takes the ball here and begins rolling around on the ground like he's on fire.

Sean: Could be marking it with his scent after Bauserman came in on that series.

Matt: Could be, Sean. It's important for a qb to let everyone know he's in charge.

Sean: No doubt, sir. I hate this game like I hated my father. 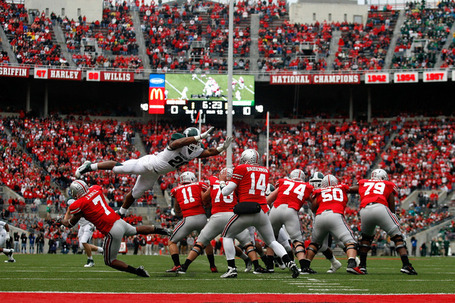 Matt: Sean, I would rather put my dick into a running weed-eater than watch this o-line block another down.

Sean: Michigan State's defensive line was starved all week and lashed with a whip with rusted nails at the end. And it shows.

Matt: Sean, I am going to watch Whitney for the 45 seconds it will take us to watch and describe this play. It will be less painful.

Sean: [snorts line of PCP] And Bauserman returns for 3rd and a parsec. The answer to our AFLAC trivia question: Joe Bauserman's favorite sports drink? It is arthritis.

Matt: Sean, when I was twelve I accidentally fed my golden retriever a bag of sewing needles. I watched that dog die. It was the worst of experience of my life until I watched this game.

Sean: Matt, that was no accident and we both know it.

Matt: So true, Sean. But neither is this game.

Sean: I'm not sure if I'm having a stroke or if half of my body has taken the easy way out.

Matt: Ask Jim Bollman. He's having one right now. But it's fine if you are. Even if half your body quits it is still putting out twice as much effort as either of these offenses.

Matt: I talked to some scouts, and what they tell me is that Kirk Cousins is a marionette made of shit brittle.

[With a late lead, Michigan State opts to pass. The Spartan defense stop the interception return before it can do too much damage.]

Matt: This game makes me want it.