Grabs you by the shirt collar on your way into ABC Liquor on Archer Road. You are wearing no University of Florida-themed apparel or gear.

I know things been tough. Real tough. You know what they say about hard times, though: There are no hard times, only hard people. I think they're talking about mannequins or people with skin disorders that make 'em look like they have scales. If that's true, I think what that means is that recessions are caused by the deformed and storefront mannequins.

Considering I was rudely ejected from the Oaks Mall just this past Tuesday for tackling a female mannequin through a plate glass window, it's pretty clear that Lee Randy White James the Third is committed to beating this thing we're in, Gators. The recession. My ongoing battle with inhalants and bath salts. Charlie Weis. WE'RE GONNA GET THROUGH ALL OF THIS, Y'ALL.

This means he's 100%. This also means he's cold-blooded and lays eggs. (Check on that last one, buddy.) Finally, it means you can cut him open, drain his blood, and then mix it with some kerosene and rubbing alcohol to make something my buddy Jake calls "Alachua Mucilage." Did this for three days with him once. I miss Jake, but you don't take a cop's gun in Lake County, shoot it at an elementary school, and say you were just "protesting the new county drainage plan and the Zionists who run the school board." Stay strong behind that wall, Jake.

He says that since he's been locked up, he's learned how to make game pieces out of toilet paper and toothpaste. He ain't a chess man, though. Made himself a Stratego set. All the pieces are 7s, 'cept one headless fella he calls "the man with the glasses."

Brantley's got too much precious Gator blood to let us down in Jacksonville against the Dawgs this weekend. Who likes dogs, anyway? I don't like 'em when they're from Georgia, or Mississippi, or especially when they're from Florida and are chasing my ass over the fence surrounding a strange and intoxicating new storage shed. Oh, you could say that you were from the zoning commission, but dogs don't speak English, and that's even worse. This is America! Speak English, dogs, or you're just Mexicans with superior biting skills and better PR people. Fuckin' Sara McLachlan.

(Mexicans can bite. Don't think they can't, amigo. I didn't make Bumfights Vol. 8 for nothing.)

Jacksonville! I've been there for the game. One year I saw a Georgia fan. He said "Gators wear jean shorts." I didn't think this was all that offensive. Jean shorts are useful. They're durable, but let people know you aren't afraid of a good time. They're casual, but look decent enough to wear into a nicer place like TJ Maxx or the blood bank if the occasion calls for it. I didn't take any offense to the man. I did still hit in him in the balls with a street sign I pulled up on the spur of the moment, but that was more a matter of the moment and the spirit, and not having a thing to do with the finer fashion debate we were having. 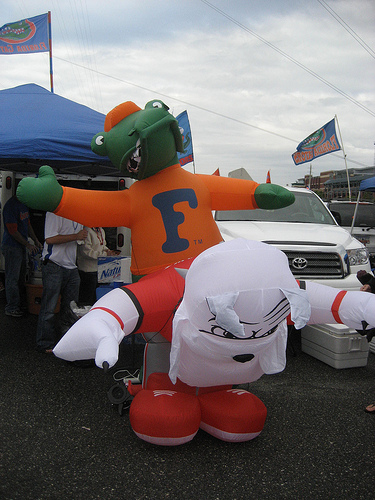 If you do happen to go, there are a few things you need to know about Jacksonville.

That last one is something I know personally and can attest to after harsh personal experience at the 2007 Cocktail Party. WHO'S DANCING NOW, GEORGIA BOY? Not you, because I just beat you to death with a Kadima paddle.