Brett McMurphy is in your air ducts, your conference rooms, your exotic yogurt shops. He is tapping phone lines that don't even exist yet. He is inside John Marinatto's prostate, and shit, did you know they have wi-fi in there? The network name is pretty funny, actually: "POLICE SURVEILLANCE VAN, BUT INSIDE JOHN MARINATTO'S PROSTATE."

If McMurphy were truly inside John Marinatto's prostate, this wouldn't really be an accomplishment. Marinatto has watched his conference disintegrate before his eyes in a manner even Dan Beebe would consider unpardonable over the past month. Any gatekeeper that negligent probably as people taking shelter in his personal glands. Be careful, John: squatter's rights take over in 120 days in a few select states, so make sure you pay attention lest yourself on the real estate market.

With McMurphy's scoop about WVU leaving the Big East for the Big 12 bearing out, this is now the conference's geographical profile. 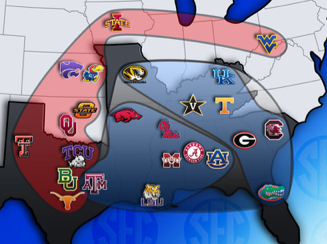 Watch the Big 12 now attempt to claim Chicago as a market by flyover. That's fine, they can do that as long as I can claim an entire Bass Pro Shops by farting in the aisles on my way through the place to get to the rest of the mall.