Share All sharing options for: CAPTAIN QUEEFHEART ON 'MYLO XYLUCKTO' 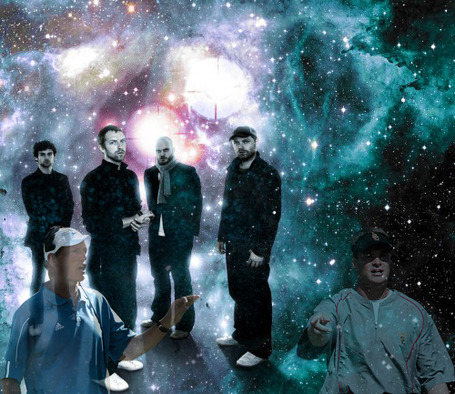 On Monday, seminal queefcore luminaries Coldplay released their 5th album, the huffing-nitrous-inspired titled Mylo Xyloto. While records historically are released on Tuesday, as is customary, much like the Pac-12's decision to embrace any and all Thursday night affairs they can get their hands on, it's hard to fault Chris Martin, et al. for electing to bump the calendar up a tiny bit.

The initial reaction to the sonic landscape during the record's 44 minutes in length is not entirely unfamiliar; initially you have a strange metallic taste not unlike the morning after taking Lunestra. You also must have 7-8 hours to dedicate to sleep after your precursory evaluation lest you risk wild hallucinations, night terrors, and/or sleep walking. However, while not habit forming, the more subsequent revisits you give it, the less horrified you find yourself until ultimately you can't even tell if it's so passable legitimately within its own means or if you've permanently scarred the subjective part of your brain into merely being unable to tell anymore. This is not unlike watching UCLA-Arizona after watching USC-Cal and Cal-Oregon the weeks prior.

Consequently, whether you know you need to or not, it's imperative to see the tangential relationship between Mylo Xyloto and the Pac-12 conference in 2011. Much like the Human Centipede 2, it's vile, challenging, and difficult to get through, but when you do, you'll find yourself indelibly changed and perceptive to a reality you never before thought passable.

This is this album's Stanford track. It's clearly better than everything for the remaining 40 some odd minutes but you know in your heart of hearts it doesn't match up favorably with what you're accustomed to listening to on the regular. Or does it? A mix of over saturated melodies and harmonies form a wall of easy listening sound that goes down not unlike a Dr. Pepper Ten. They sat it's not for women, but much like when your boss (or parents from an earlier episode in your life) tells you not to do something or you can't have something, instinctively you want that and only that. The reduced calorie count will also totally help come Spring when you have to show off that killer bathing suit bod, BB. The lyrics are typical Chris Martin middle school poetry drivel, but it's not like Stanford's defense is sexy on paper either. It just works.

The record's second single, this song isn't particularly good at first, second, third, or fourth glance, but none the less you'll find its passable hooks stuck in your head for the better part of the rest of the afternoon/evening after initial exposure. Within 3 days, you're a brainless, organ-less zombie who's only sustenance is listening to "Paradise" on repeat in 'Private Listening'/shame mode on Spotify. This is not unlike Vontaze Burfict: though a soulless killing machine in and of himself, he too secretly is fulfilled only be easily digestible pop records w/ redundant hooks and anything but bold flavors. None the less, the string swell around the 1:24 mark is pretty neat, fulfilling the Brock Osweiler chill bro tattoo component of the song's textures.

Straight out of the Keane playbook, this can only be a Steve Sarkisian helmed symphony of sound. It's nothing dynamic, nothing groundbreaking; vanilla as your pretensions would possibly allow for. The acoustic guitar is delightful mixed/tracked though. Kudos, Brian Eno; you're truly the Norm Chow of the queefpop universe. I'm still not entirely confident I know what Keith Price is, but I'm pretty sure he too could write a bridge that goes "All the boys/All the girls/All that matters in the world." So there's that.

This sounds like something lifted from a Coldplay b-side circa 2004. I was in college, and it was a far simpler time. 12-string guitars for layering are nice though, almost nice enough to overlook a terrible "when the saints go marching in" lyric. You know who else is stuck in the mid 2000's and relies on faulty cliches? California and confusingly still head coach Jeff Tedford. If ain't broke though, am I right, Chris Martin? If you're threatened by change and completely willing to let your painstakingly mediocre coach run the ship with a billion year contract, you're probably okay with a song with the premise "girl, it's you and I against the world" (not actual lyrics... I don't think).

This song fits so perfectly as the Pac-12's lead single as Lane Kiffin too was in his prime 7+ years ago and the mixed metaphor that inspires the song's concluding hook and title alike are actually ripped verbatim from his poetry Xanga from the same time period. This song is harmless and probably passable as a faux-Brazilian dance pop/rock tune if it wasn't for the fact that you just can't not unlearn the terrible title and that ridiculous line. This is the same effect one has after watching Monte Kiffin's defense the last two years. Beat a shitty 3-3 Notre Dame team on the road? Hey, cool. Got a good vibe to it. Give up 17-points to them and need to pull away late to clinch the victory? Oh...

The b-side to the previous track, this song is straight cribbed from early 1990's Achtung Baby era U2. You know what else is straight cribbed from the same-era and also serves as a b-side to something else in the same town? Rick Neuheisel's UCLA Bruins. There are moments where you genuinely stop and think "Hmm... You know what, maybe if I just give it enough time, this will get interesting." Doesn't anyone care about ripping off U2 properly anymore (other than Bullet The Blue Sky Rick)?

This song is short and I promptly forgot what it was about as soon as it was over. Not unlike Utah's tenure in the Pac-12. The guitar part is aesthetically pleasing but uncomplicated akin to something a 17-year-old would write in an attempt to win the cute girl in his Speech class's effection then promptly play at all 3-lunch-periods in a failed attempt to catch her ear/affection. Utah at least succeeded in winning the affection of a suitor, but they certainly have yet to win much else (*COUNT IT*)

Yikes. So upon initial consumption, my reaction was, "HOLY MOTHER OF GOD, THIS IS THE MOST DEPLORABLE PIECE OF SHIT SONG I'VE EVER HEARD." Then it was more like, "Did Gwyneth write this?" FInally after a 3rd (and 4th listen), I've decided it's less awful and more just un-stimulating, disinteresting, and too far removed to be anything good. This fits the M.O. of new Colorado football coach Jon Embree to a 'T'. Sadly Tyler Hansen doesn't look anywhere near as good in sultry regalia.

Truly the best effort "The Fray" ever ghost wrote, a basic snare beat, coupled with queefy piano, and falsetto vocals equate to the Washington State of the album. Man, those gray duds sure are nice, and it's good that they have something right? Also up in flames: Jeff Tuel's viability as a long term, effective solution at quarterback for Wazzou. Welp.

Oh hey, something passably uptempo. After the previous, oh, 4-6 slow dances, you get something with a pulse. Sadly you can't feign injuries to get it to stop; it just keeps coming at you. It's not entirely revolutionary, but it feels so much sexier compared to what's going on around it. Chip Kelly, I dig what you're trying to do. Trying to get us to move our feet and feel good about life, man. But in the end, you're probably just second best in an admittedly suboptimal bunch. And that's okay, really.

Man, swelling strings? Crazy retro-swooning vibes a plenty? I want to like this, I really do. And we all sort of want to like Arizona and Oregon State. Oregon State boat raced Notre Dame that one time. That was awesome. Arizona's kind of got cool uniforms going on and those chill public art projects in Tucson and.... Really, I've got nothing. This song is listenable and interesting in contrast but it's probably some kind of monumental failure that will make you lose your job if you listen to it without context too often. Besides, all Coldplay does is lose football games and start 6'5" 2-star quarterbacks (respectively).

And there you have it. The Pac-12 and this record may not be so bad after all. Or, maybe, they're something soul cripplingly bad beyond comprehension that you're now forever void of even correctly surmising what is and isn't subjectively good in this life. It's impossible to say, really: