Share All sharing options for: WORTHY ADVERSARY: MARK MAY 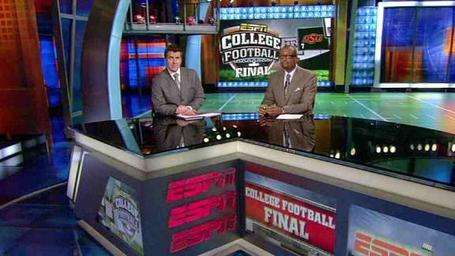 "LEADING THINGS OFF… KANSAS STATE PLAYS OKLAHOMA THIS WEEKEND. OKLAHOMA'S BEEN EXPOSED FOR WHAT THEY ARE: A PHONY. IF KANSAS STATE WINS THIS GAME, THEY'RE FIRMLY IN THE DRIVER'S SEAT, EVEN OVER THE LIKES OF CLEMSON AND STANFORD, TO PLAY THE SEC CHAMPION FOR THE BCS NATIONAL CHAMPIONSHIP."

"Hello... My name is Teddy Ruxpin and I'd like to tell you a story."

"SORRY IS WHAT USC IS GONNA BE WHEN THEY PLAY ALL-EVERYTHING QUARTERBACK ANDREW LUCK AND THE STANFORD CARDINAL. DAVID SHAW ISN'T GETTING NEAR ENOUGH CREDIT AND SHOULD BE ON THE SHORT LIST FOR JUST ABOUT EVERY COACHING AWARD IN THE COUNTRY."

"Can you and I be friends?"

"I THOUGHT WE WEREN'T GOING TO INTERRUPT.  I SAID THIS BEFORE THE SEASON - WEST VIRGINIA DOES NOT HAVE THE TALENT ON DEFENSE TO WIN THE BIG EAST.  SYRACUSE IS GOING TO RUN AWAY WITH THIS CONFERENCE AND A TRIP TO A BCS BOWL. CASE CLOSED."

"I came here from the far-off land of Grundo, where I had lots of adventures!"

"THE ONLY GRUNDO I KNOW IS MORE GUND-O: OKLAHOMA STATE HEAD COACH MIKE GUNDY. NO DANA HOLGORSEN? NO PROBLEM. OKLAHOMA STATE AND THE SAVY VETERAN GUNSLINGER BRANDON WEEDEN HAVEN'T MISSED A BEAT. ONCE THEY BEAT OKLAHOMA IN THE BEDLAM FINALE, LOOK OUT BCS. THIS TEAM IS FOR REAL."

"What Grubby said was correct. By any chance did you catch what would happen? We discovered the hot air should push the ship up into the sky, not pull it. Which means the ship would have to be suspended by rope!"

"I'LL TELL YOU WHAT'S FULL OF HOT AIR AND THAT'S COACH WILL MUSCHAMP.  HE NEEDS TO SPEND LESS TIME JAWING AT THE REFS AND MORE TIME WORKING ON FUNDAMENTALS.  SAY WHAT YOU WILL ABOUT RON ZOOK, BUT HE KNEW HOW TO SHOW RESPECT TO THE OFFICIALS."

"An old treasure map! The treasure was supposed to be hidden in the far off land of Grundo. So we left our home land of Rillonia to set off on our great adventure."

"Two hands are better than one, if you've got a job that must be done!"

"WELL I NEVER THOUGHT I'D SAY THIS BUT FOR ONCE WE AGREE.  YOU CANNOT SUCCEED AT THIS LEVEL IF YOU DON'T TAKE CARE OF THE FOOTBALL. I DON'T KNOW WHO THIS GUY IS RECE, BUT I'M GUESSING HE PLAYED AT COLLEGE FOOTBALL'S HIGHEST LEVEL."

*sings* "Let's go to far off places, in search for treasures bright!"

*buzzer sounds* "Well that's all the time we have today, gentleman. Great stuff as always. Join us this sunday for 'BCS Countdown' as our experts Skip Bayless and Craig James discusses the national title landscape with another notable special guest and expert."