ARP CHOMP CHOMP ARP CHOMP ARP CHOMP. Meekly, half-assedly, and perhaps already intoxicated, it is time to begin the oddest and wooziest of college football traditions, the World's Largest Cocktail Party. How weird is it? So odd that it starts by people a.) deciding Jacksonville is a "halfway point" between Florida and Georgia's campuses and that it is "neutral," and b.) that people would voluntarily choose Jacksonville as a destination for anything, much less a football game.

We'll be heading down to the Ponte Vedra area on Wednesday to do this correctly for the first time in our lives. This means getting a house on the beach, camping out for a few days in this house, and then leaving before the owners return to attend the game on Saturday. (Wear gloves, wipe for prints.) As low-wattage as this game is on the national perkometer, it does have one thing going for it, and that is pure naked desperation and one improbably ranked team.

In conclusion, welcome to a very shambolic hate week. Todd Grantham has one thing in common with Charlie Weis: he's overpaid, and kind of a dick. 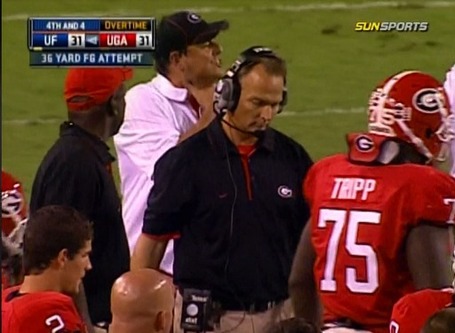 (The difference is that Charlie is an overpaid NFL coach moonlighting in college who has actually won something.)

THE TRUE STORY OF A LIVING CHAMPION. How you get a felony out of the AZ streaker's adventure on Thursday night we will never, ever know, but this is the same state that hosts the Fiesta Bowl so no level of legal iniquity is past them. Stay strong, Master Troll: your legal defense fund may be the EDSBS community if this gets serious enough. (If Felony Impersonation is a real thing, then Rick Neuheisel should have been arrested for impersonating a UCLA football coach long, long ago.)

NICK SABAN WANTS YOU TO RIDE SOME CHILLWAVES.  Have you gotten the new M83 yet? You probably should, says Nick Saban, who just wants you to maybe listen to it three or four times, take a few Xanax, and just ride some chillwaves while not getting too excited over the impending National Title Game between LSU and Bama. BTW, this will be pure hilarity to look back on when all of us miss the impending K-State national title upset, and then Bill Snyder is cutting and pasting it from his aol.com account and sending it to us as comeuppance.

SPEAKING OF DEVOURING. Coach does love him some chocolate chip cookies.

GONE GONE GONE. Bill C's hot seat table is extremely accurate, though it still pains us to see Houston Nutt on there because there is no obvious ejection seat job for him to land in the SEC, and by rule Houston Nutt must be coaching some SEC team or another at the end of the calendar year. Meanwhile, Nutt accosted a reporter who said the Rebels would lose 49-10 by saying "That ain't no 49-10" in a game that the Rebels for all intents and purposes blew after leading. This is why this man is a professional and you are not.

MONTANA KNOWS HOW TO CELEBRATE A WIN. By getting tased, of course.