THE ROILING THOUGHTS OF MATT MILLEN ON TELEVISION

Share All sharing options for: THE ROILING THOUGHTS OF MATT MILLEN ON TELEVISION

Matt Millen discussed the suspension of Michigan State defensive end William Gholston on air yesterday on ESPN. Let's go to the film to see exactly how one man fought the squirrelly machinations of his own demented mind to make it through two minutes of television without openly unraveling (too much) on air. 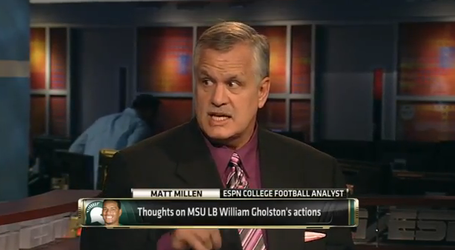 Oh god. Did I leave the birdfeeder open? Those birds. Fowler's talking. SHIIIIIT. He doesn't know about the birds. Birds need us for food! Not like eating us. I don't think like eating us, at least. BUT WHAT IF THEY DID? Golly, that would hurt. Beaks without teeth. It'd be like someone snipping at you with a holepuncher. That's why I never ordered them when I was with the Lions. We stapled things, or it just stayed loose. No A-clips, either. Pinchy-ow!

Man, I have to say something. Fowler's lookin' at me like I'm covered in some expensive meat you have to say in foreign words.

Nailed it! Millions for Millen, buddy!

Fowler, incredulous: "You don't think that stands out?" 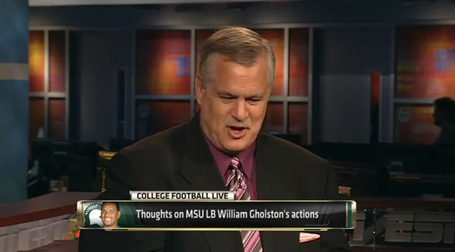 Look at the desk. KEEP BREATHING. You probably can't die from confusion and the farts, but don't be sure and take a deep breath. Don't think about the birds, even if you thought they were your friends. But how could they? Stupid Matt. Always wanting friends. Always reaching out and giving everyone birdseed when all they want to do is eat you. Stupid Matt. STUPID STUPID MATT. Gonna go home and teach the birds a lesson. Oh, just you wait bird traitors. Matt's gonna make some plans for you.

Fancy boy really wants an answer. I bet HE doesn't like me either. Just using me for the footballs like everyone else. Charles Rogers all over again. Doesn't even call, and when Ol' Matty is just sitting on the couch? Probably all the reefers he smokes and the doobies. 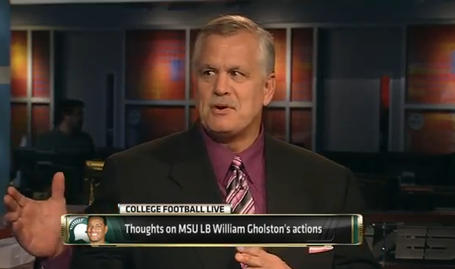 I should be mad. Millen, get mad! Think about the birds! They're not singing outside your window. They're saying "Millen's a chump. A chump who we steal seed from all the time, and the dork just brings it to us!" They don't know how much love I have to give. OOOHHH IT MAKES ME SO ANGRY.  That stupid game has it all wrong. The pigs are the heroes and birds are the villains. Can you hug a pig? I bet you can teach it to hug but it would probably just do it to betray and eat you while you were sleeping. You're like Dr. Doolittle but all you can say to animals is "Take advantage of my tender heart and play my emotions, stupid user animal."

I played football. I should mention that because you can't argue with it and it wins every time. 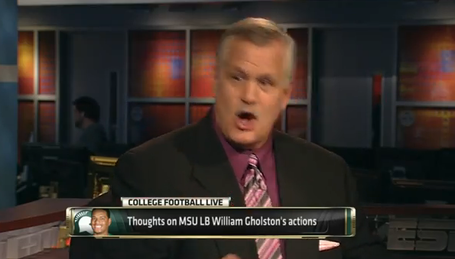 "No, I'm not out of my mind, because I played for a long time, and---" Fowler continues to be incredulous. Herbstreit appears. 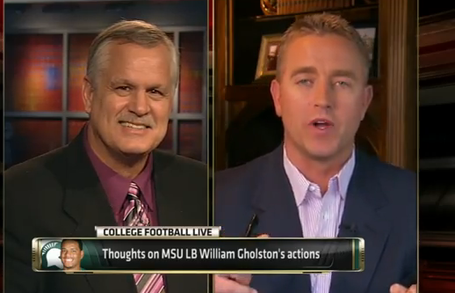 Well, hello sugarcakes. He just keeps getting prettier while you keep getting fatter and uglier. HE'S LIKE THE BIRDS MATT. Tell him that. Tell him on air that he'll never understand what it's like to not be pretty. Make him feel your pain and lonely! Do it Matty! Do it now

I CAN'T HE'S JUST TOO GORGEOUS JUST LOOK AT HIM HE'S LIKE A SENATOR CROSSED WITH A SUPERMODEL.