Share All sharing options for: THE TROLLBOT 3000: THE BEST BLOGGER/COLUMNIST IN THE WORLD

In order to further the cause of easy, low-effort commentary, we present yet another EDSBS LABS product: The Trollbot3000, the only machine on the planet capable of making both boiled peanut hummus and instant commentary guaranteed to provoke the stupidest people on earth into commenting and sharing an article with their friends to be outraged about on Rivals' forums. 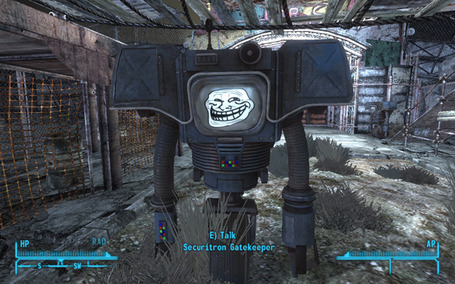 Here are just a few things I GENUINELY THINK ABOUT [college football]:
Notre Dame was denied partial membership to the ACC in theory by John Swofford? His mother taught him right: never let an Irish guy tell you he'll just put it in halfway. (Not that you would notice with an Irish guy. No wonder Brian Kelly is so mad all the time!)

Why is Andrew Luck even a Heisman candidate?  Stanford gets to play in an overrated conference that is NEVER even on TV.  Meanwhile, Denard's gotta face Purdue, Iowa, and Illinois in consecutive weeks!  The only school with a pedigree Stanford has left is Notre LAME, and we already softened them up for you.  Guess they call him Luck for a reason.

Maybe James Franklin needs a Miller Lite or two. Complaining about hard hits in football? Sounds like someone needs to "Man Up."

Coach Randy Edsall has been a complete fraud in year one. Maryland's new shell does not fit, and they should start the new year by blowing up whatever is happening now and hiring the one man who could make this job work.

Nick Saban will have an NFL quality defense again in 2012...when he is coaching in Dallas for Jerry Jones.

Eric Crouch shouldn't have won the Heisman.  He should have won TWO Heismans.

Mack Brown? After a devastating loss to Oklahoma, it's more like "Hack" Brown and the Wronghorns, if you ask me.

Bob Stoops will salvage his reputation as "Big Game Bob"… By quitting his job and picking up desperate 35 year olds in an Oklahoma City bar.

Everyone thinks Urban Meyer is a lock to be the next coach at Ohio State. Why doesn't anyone talk about Jon Gruden for Ohio State? Super Bowl coach. Charisma. Think outside of that box, people.

No way Raiders should start Kyle "I Should've Been" a Bowler.

Alabama's okay. Would be a shoe-in if Trent Richardson didn't do his shopping at a Birmingham men's fashion store.

LSU players caught for smoking fake marijuana? The season does weed the uncommitted out, but this smokescreen feels fake. Probably just another thing Les has in that magic hat of his. (Why did they need fake grass? Les probably ate all the real stuff, that's why.)

Skip Holtz is the best gameday coach in the nation. I said it. The. Best. It's in his blood.

The NCAA has spoken. But where can Auburn go to get its reputation back? Who pays for that?

The SEC has the best players for one simple reason: we want it more.

It's one thing to hate a kid for his indomitable spirit, it's another to hate him for his difficult upbringing. That's why Matt Barkley may just be the best person in college football.

You playoff types can argue all you like, but the bowl system is still about the kids and always will be.

A two loss Rutgers deserves to be in the national championship over an undefeated Boise State.  PERIOD.

It's one thing to hate a kid for his indomitable spirit, it's another to hate him for his difficult upbringing. That's why Matt Barkley may just be the best person in college football.

George O'Leary continues to get passed over for jobs, but Lame Kitten keeps on taking checks at U$C? Whatever, "college football."

If the powers that be are serious about cleaning up the game, they'll make all the players live in one common, secured facility, where they'll eat the same food, wear the same clothes, and keep the same schedule.  It's about integrity, y'all.

Someone needs to tell Brady Hoke that he's a "Michigan Man," not "The Michelin Man." When the rubber met the road against Michigan State, the flat Wolverines showed that their road to recovery was a long one indeed. Dave Brandon can't guarantee 30 minutes or less for this one, folks.

The Mountain West has a playoff plan. That's cute. I have a plan for not paying alimony to my ex-wife. Neither one is very realistic!

Houston Nutt is going to be the best decision Georgia AD Greg McGarity ever made.

If the SEC really wants to address their image problem, it'll add Brigham Young University as its 14th member institution.

Love the unsportsmanlike conduct penalty. It really has brought sportsmanship back to the game.

Will Muschamp has been more "mess" than "champ" six games into his coaching career. Charlie Weis is a good cornerstone for a building, but not for a coaching staff. Talk about going "Boom!"

Mizzou won't compete in the SEC. They're going to DOMINATE in the SEC.

Rick Neuheisel isn't the only man in Westwood who still cares, but he might just care the most. That's his greatest flaw as a coach. He gives a medically impossible percent towards a greater goal. It's not his fault there aren't 105 kids out there with the same boxer's mentality he has. I'll give him a puncher's chance 'til the end.

Dabo Swinney? More like Swinney Todd. Firing good men like Billy Napier and Andre Powell and bringing in self professed carpet baggers like Chad Morris? Clemson might have traded their "soul" for a "bowl."

Guess who's making some Illi-noise? Ron Zook, the most underrated coach in the country, that's who. Rose Bowl dreams are still blooming for the Illini, but you have to wonder when the Bucks are going to trade in their taste for Fickell football and start "Zook"ing elsewhere for manswers to the Buckeyes questions.

Beating Georgia in a bowl? Being in position to win the most prestigious NOT overexposed conference in the country yet again? Sleeping giant UCF, that's who. Classic George O'Leary, just waiting to make his own splash at the top of the mountain for the Knights of Orlando.

I never really thought that much of Mike Leach anyways. Tommy Tuberville? Now that's a coach you can build a Sugar Bowl legacy around.

Tech stung again by a team with time to prepare for Paul Johnson's offense? Sounds like for once, the Jackets have run out of options.

If you put Jacory Harris in the Air Raid offense he'd throw for a thousand yards a week easy. How's that for "Golden" ideas, Al?

UCF's ultimate goal shouldn't be the Big (l)East, but the SEC. Mizzou? Really? Orange County should be looking awfully green to Mike Slive about right now.

It's not his physical skills that limit Kellen Moore's draft potential. It's the thug-erazzi of the NFL who just don't want to see a good kid succeed. Sad, but true.

His arm strength is not the issue.

It is his heart.

The heart that is just too darn big for "haters" to accept.