BEHOLD THE FUTURE OF COLLEGE ATHLETICS: THE SUNBEAST

Share All sharing options for: BEHOLD THE FUTURE OF COLLEGE ATHLETICS: THE SUNBEAST

While the Big East holds a teleconference full of lies, we have obtained a copy of the real plan for the future of college football as we know it: the secret plans for the SUNBEAST CONFERENCE. 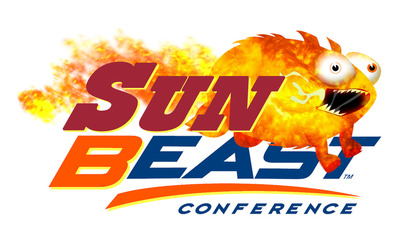 DEMOGRAPHICS: The SUNBEAST will pair two athletic conferences in desperate need of each other, the Sun Belt and the Big East.

The first, the SunBelt, a collection of schools with affordable real estate and no BCS Bid or substantial television contract. The second is the Big East, a conference in dire need of members and a place to find cheap real estate for retirement homes, investment properties, and an eventual escape from the wintry sorrow-holes they inhabit.

If you cannot read between the lines: this is all an elaborate real estate venture with a football cover. We plan to buy the land now, upsell it, and then leave the new owners with worthess acreage and ourselves with full pockets. Remember to read the brochures! You laugh, but people include blatant admissions of truth in them all the time, and you deserve to be snookered for not paying attention to the fine print. There is a Dunkin' Donuts coupon on page five of this presentation, and you probably won't ever know that because you won't read that far, either.

TV PITCH. Leveraging key demos like this, the Sun Beast brings blahbetty blahbetty whatever. Like you need a pitch with football, but just in case you do, let's tell the story with a little help from the Golden Corral. 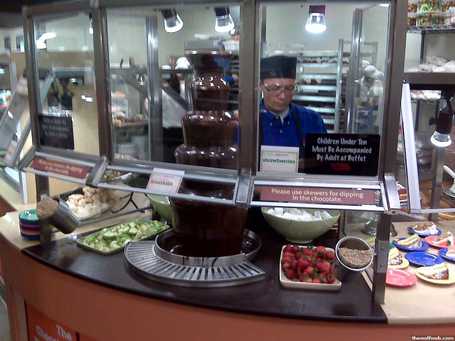 They have chocolate fountains at the Golden Corral now. You say "Ha-ha, that's funny, I won't eat there, but if I do, I will probably just have a salad, because Golden Corral is basically one big boot camp for fatness." So you get a salad, but then you think, "Well, I may as well try some of the bourbon chicken."

So you try some Bourbon Chicken, and it's not good, but it is certainly better than you thought. This leads down a slippery slope of Golden Corral consumption choices until you arrive at it, drawn by forces you cannot understand. It stands before you. From one man's perspective, it is just simmering C-grade chocolate and sugar heated and pumped down a contoured mold; from another, it is a ziggurat of culinary orgasm, a tower of fulfillment into which one dips the otherwise regretful marshmallows and disappointing cake squares of life to redeem their sadness.

Either way you're eating it, and thus the pitch. When someone doubts the brilliance of this plan, just repeat: "It's like a chocolate fountain at the Golden Corral, but for football."

Further membership may be considered, but we draw the line at a 24 team conference. Anything more than that would be excessive, and we are not targeting the SUNBEAST as an orphanage for wayward football programs. (A foster home perhaps, but not an orphanage.)

DIVISIONS.  As a trendsetter in its field, the SUNBEAST will be divided not into two uneven divisions, but instead into THREE equal divisions of five teams a piece.

The divisions are regionally themed, and tap into resonant market specificities: the maritime/fishing themes for the Florida/Louisiana divisions, the rural/rugged connotations of the SunBear divisions, and the need for sunlight and Vitamin D from the Sunlamp division.

CHAMPIONSHIP GAME: As another trendsetting move, the SUNBEAST will host the first two-day, three-team championship weekend. The winners from each will be invited to the logical home of the Sun Belt Championship Game: Abu Dhabi, in the United Arab Emirates. A tentative agreement in principle has already guaranteed sponsorship of the game until the year 2132, and that includes travel expenses even from such far-flung locales as Denton, Texas.

How does this work? The answer is simple. Take three teams, one beautifully appointed stadium built from abused Filipino labor, and them apply the principles of MUSCLE CONFUSION. 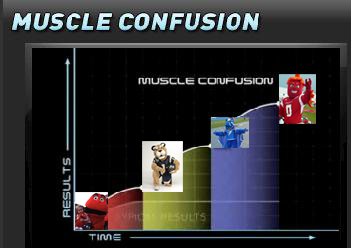 IDEAL TELEVISION CONTRACT: We are currently negotiating with the Food Network and the Big Ten Network. The Food Network would require coaches to eat certain foods on the sideline for endorsement money, while the B1G is interested in broadcasting our games because "women's volleyball isn't cutting it, and SUNBEAST football would make our product look more enviable in comparison." 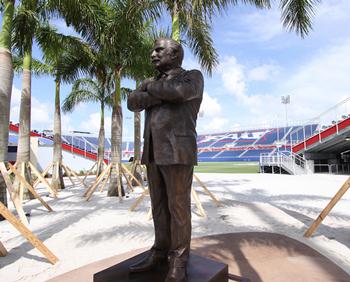 You'll have to move it, but it was the only logical choice.