LUBBOCK: THE MOST FRIENDLY HELLMOUTH IN ALL OF WEST TEXAS. This isn't an omen or sign of anything, and we mean that. It's just, like, Wednesday in Lubbock. 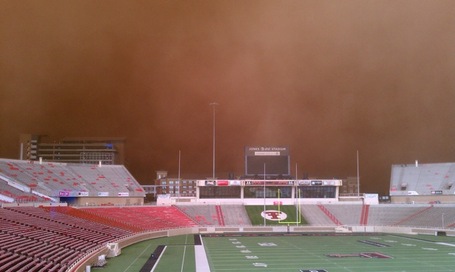 Why more music videos for 1990s death metal bands weren't shot in Lubbock, we'll never know. Seems like the perfect setting, really. If this appears in your town and you do not live in West Texas, you probably all begin eating each other and looting canned food off the shelf. If it appears in Lubbock, people shrug and head inside for a bit.(Via.)

MAYBE MACK BROWN DOES HAVE A FUTURE IN POLITICS. He must have some potential, since he thinks the AFCA needs to take a serious look at the extremely important issue of postgame handshakes. Meanwhile, Professor Jackie Sherrill thinks y'all ain't doing any of this right.

PERHAPS WE ARE TALKING ABOUT FEELINGSBALL. Kellen Moore, according to Chris Petersen, "Feels the game well." It's Austin Murphy, so it's all loopy and fun to read, but still remember that Kellen Moore is an emotional passer, and every fade is a tender caress of the cheek. (HT: Littmann)

HAPPY BIRTHDAY FRANK BEAMER.  Happy 66th 65th birthday to Virginia Tech head football coach Frank Beamer, who will celebrate as he always does: by getting a cake, thanking the staff, and then festively punting it onto the ceiling.

NICK SABAN COULD GIVE A SHIT BUT: Mizzou is at least expected to file the first flight of paperwork to become a member of the SEC "soon," which would then start a process leading to membership "eventually" if the "possibly" becomes the "actually." Conference expansion is as exciting as building a shed in your backyard with the proper documentation and permits from the city, except when you're done you look back and say, "Shit, there's a Gary Pinkel in my backyard." Avoid your sentimental inclination to let him sleep in the house: he's an outdoors breed, and likes sleeping out in all weathers. Anything else would be a perversion of what he is.

AWWWWW THAT'S NOT NICE TO PAUL RHOADS HE IS PROUD TO BE THEIR FOOTBALL COACH. Cuppycup finally figures out the Cyclonehawk logo. Really, this logo hasn't made sense since Troy Davis left Iowa State, since he was the last Iowa State player who looked like a whirling dervish let loose on the field.