MIKE STOOPS WINDS UP TIED TO THE TRACKS

Share All sharing options for: MIKE STOOPS WINDS UP TIED TO THE TRACKS 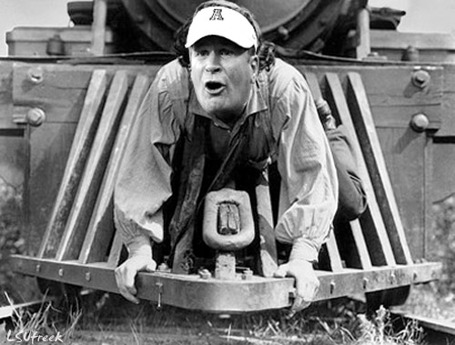 You will probably remember Mike Stoops' tenure in Tucson by his theatrics. Science backs you up on this: Stoops was more theatrical than his peers by the percentages, and spent most of his camera time stretching rubbery features around endless complaints to referees. We always saw Pagliacci, but he could have been any number of frantic crooners bellowing on the sidelines for anyone who would listen, and would not have looked out of place booming his complaints through a megaphone while wearing a vaudeville suit, bowtie, and pancake stage makeup.

Stoops spent eight seasons in Tucson. Half of those were losing seasons, including this season's 1-5 tally that ultimately got him fired as he returned from a recruiting trip. The other three came in the long ascent from Arizona's plummet into the chasm of John Mackovic's familial disgrace of the Wildcats. (Remember how Mackovic tried to win his players back with a teary confessional to them, but still made sure cameras were in place as his team quite literally mutinied under him? That John Mackovic.)

Stoops suffered three straight losing seasons in his first four years at Arizona, but administrative patience allowed Stoops to reach a place of temporary happiness: two eight-win seasons in 2008 and 2009, bowl berths in the Las Vegas and Holiday Bowls, respectively, and the high water mark of a nine-spot in the rankings on September 18, 2010. Stoops had a promising defense, a marquee-ish quarterback in Nick Foles, a lumbering but surehanded first-rank wideout in Juron Criner, and the best and worst thing of all for a coach: hope, and the subsequent weight of expectations.

That ranking and the promise of a new plateau--Pac-12 championships, ten win seasons, and a return to the halcyon days of the 1990 and '91 Desert Swarm--evaporated over the course of the 2010 season. After a comeback win against Iowa and a romp through the underbelly of the Pac-12 schedule, the Wildcats mimicked earlier collapses down the stretch from the Stoops era by dropping their last four, including the kneecapper in a double overtime loss to Arizona State.

That loss happened with what may be considered one of the hallmarks of the Stoops era: malicious luck in all directions. Arizona State blocked a game-winning extra point attempt to send the 2010 rivalry game to overtime, and would then block another to seal the win in overtime. The random tip of the ball in the 2009 Washington loss, the bizarro loss to New Mexico in 2008 (yes, the Lobos,) the Wildcats' biggest win in Stoops' tenure coming over Oregon in 2007, when Dennis Dixon's already torn ACL split into ribbons against the Wildcats' pesky defense. Even in their biggest moments, someone suffered from misfortune in Mike Stoops footabll.

We saw them last year at the Alamo Bowl, a funereal occasion from the start. Most Arizona fans seemed to regard the Stoops era as over already, and the 2010 season wasted, and the Alamo Bowl as cold consolation tepidly consumed. The only thing devoured on the field that night was Arizona, and after a quarter it became apparent Dana Holgorsen, sucking down Red Bull after Red Bull on the Oklahoma State sideline, was all too happy to drive the nails in Stoops' coffin. It was an eerie and slightly less spectacular replay of Nebraska's 33-0 defeat of the Arizona in the Holiday Bowl, but no less definitive.

To hear that he was fired felt weird last night because for us, he's felt fired for the better part of ten months. In his wake he leaves the plateau of eight wins, and no directions on how to get from this present here to a future "there." That nine spot in the rankings hanged him, as it has so many other good but not great coaches who found themselves on the front of the train one minute and beneath it the next. (And a warning: it's a long way up to that pleasant but unspectacular plateau, and an extremely short and fast path back down to 3 wins a year.) 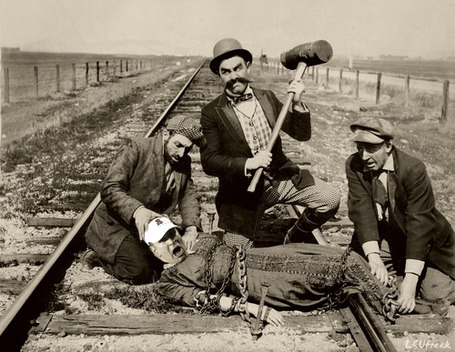