NO, YOU GET TO DO THAT. The rule is stupid, but if someone's going to break the seal on making SEC refs enforce a rule about aesthetics, let it be an Aussie punter for Louisiana State on a fake punt TD. 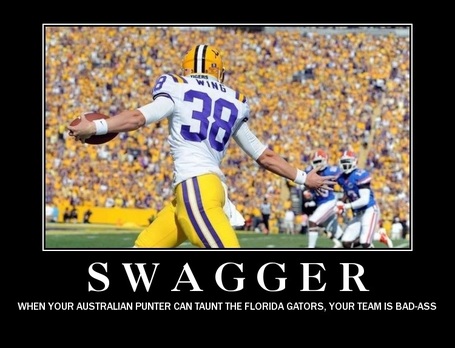 Getting better. Excited. Oh, and let's not forget "frustrated." And there we are, hyperventilating, and trying to remember that things take time, and that Alabama lost to UL-Monroe in year one of the Saban era, and that LSU has been incubating this beast for the better part of four years since their 2007 title, and oh Jesus the ceiling isn't supposed to bleed, is it DAMN YOU MUSHROOMS YOU TURN ON US AT THE WORST MOMENTS.

But yes, Saturday sucked in this much detail, and even more when you had to sit through all of it counting the seconds. (In other landmark moments of conference taunting: well played, K-State fans.)

MEANWHILE IN THE CULT OF LES: You win by committing fewer "Fu-pas" than the other team. We are afraid Florida with Charlie Weis as offensive coordinator starts each game with one large one on the sideline.

POLLS POLLS POLLS POLLS POLLS WE DO ADORE. LSU, Bama, and Oklahoma, and after this weekend's carnage that sounds more than right. Stanford is up there, too, even if their fans don't exactly show up for a blowout of hapless, legless, armless, and harmless Colorado. (Third quarter tree races! Whee!)

THE ACC TAKES ORDERS FROM ESPN. Boy, the ACC better be glad we don't run their CFB programming. We would have totally ordered theme to take the Universidad de la Habana and Pepperdine so we could blow company money on vast condos in both places for our pleasure. In other news re: BC, their AD is a passive-aggressive dick.

THAT SHIT BRAY, AND BRAY MEANS "SAD." Tyler Bray is out six weeks with a broken thumb, meaning the clearly lipread "I don't think it's broken" on Saturday night was a misdiagnosis by Dr. Bray. His replacement will be Matt Simms, son of Phil Simms, who will beat up anyone who says anything bad about his son. Meanwhile, keep TROLL-IN TROLL-IN TROLL-IN WHAATTT---

THIS IS A SIGN. We remain convinced that the Lost Clemson Fan is the human Wazzu flag of marketing schemes, and that he will pop up at various games across America as the season wears on in a brilliant show by Clemson's athletic department.

Because coach Ron Zook, who tells his players to keep playing and not worry about the score, took his own advice too literally and was so immersed in the game that he didn’t know the score.

You know that airline ad where they show an embarrassing moment and say, ‘‘Wanna get away?’’ This was it.

‘‘Maybe I didn’t know what the score was,’’ Zook said. ‘‘That’s happened to me before. It’s usually when we’re behind. [This will] give you something to pound us about.’’

REDEEMING THIS MORNING'S COLLECTION OF CHARRED BODIES AND SADNESS. Shel Silverstein, mean-mugger supreme. "I call this poem 'The Ain't-Givin'-A-Fuck-Tree.'"