This week, the coaches who don't have an opponent to plan for have been invited to a luxurious country estate for a sleepover.  It sounds like the perfect place to unplug and get away from the rigors of college football - but have they bitten off more than they can chew?  Find out in this week's thrilling edition of...

UTEP HC MIKE PRICE: Castle Yelskcolekim.  I think it's named after some Moldovan baron or something.

DUKE HC DAVID CUTCLIFFE: And you said you found this place on Craigslist?

PRICE: Yup.  I was looking for a used bumper pool table and stumbled upon this and thought, well, hey, that looks like a pretty cool bye week hangout spot for me and the fellas!  Oh look, some sort of welcome note - I think.  The hell is this, anyways?  Doesn't look like any language I've ever seen. 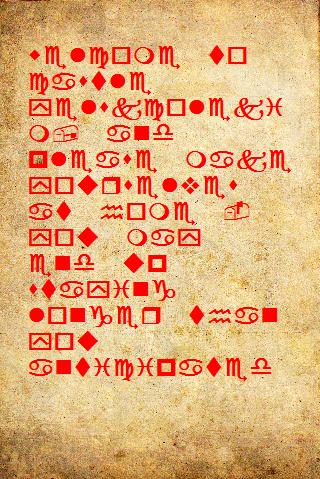 OLE MISS HC HOUSTON NUTT: Oh, that's Wingdings.  Give it here, I can read it; that's all we spoke in the house growing up.  Let's see..."Welcome to Castle Yelskcolekim.  Please make yourselves at home - you may find that you stay for longer than you anticipated."  That sounds a little creepy.

(The doors slam behind them and lock, and the power shuts off.)

SMU HC JUNE JONES: Jesus, Lane, get OFF ME!  It's probably just a blown fuse or something!  Ugh, did you just piss yourself?

HAWAII HC GREG MCMACKIN: No, he was already like that when we picked him up.  I didn't ask.

PRICE: Let's just calm down and figure out how to turn the power back on.  I'm sure June's right - this is an old place, and it probably does this all the time.  Course, that also means the wiring's bound to be all funky, so we probably won't just find the breakers in the basement.  Let's split up and search.

(Dividing into groups, the Buddies spread out over the castle grounds.  COLORADO STATE HC STEVE FAIRCHILD, WASHINGTON HC STEVE SARKISIAN, and McMackin head to the kitchen.)

FAIRCHILD: Hmm.  Stoves and ovens all look like they run off gas.  I guess that's good in case we get hungry before we fix the electricity.

MCMACKIN: This place has like twelve pantries, but I haven't seen any fuse boxes yet.  Where's that big metal door lead?

SARKISIAN: Looks like a freezer. Man, I bet they have all kinds of ice cream in there.  I'll hunt for a scoop - you guys check it out.

(McMackin and Fairchild enter the walk-in, but they neglect to prop open the door, which shuts behind them.)

FAIRCHILD (muffled through the glass): Hey, Steve, come let us outta here, man!  There's only artichoke hearts and beef stock in here.  And it's cold! 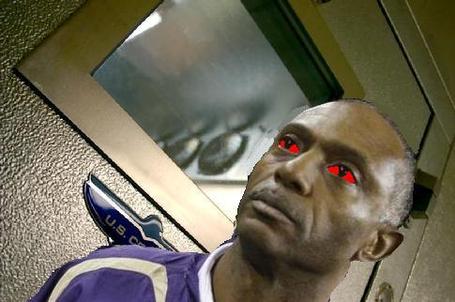 THE UNHOLY SPECTRE OF TYRONE WILLINGHAM: Looks frosty in there.  Temperature gauge says its about 30 degrees.  But don't worry.  I wouldn't just leave this thing set to - eight, it looks like.  As you know...

(he turns the freezer to its lowest setting)

...zero is my specialty.

MCMACKIN: NO!  Shit, why is it the WAC guy that always dies first in these movies!

FAIRCHILD: We're not even in that conference.  I don't think.  Maybe we are, I can't keep track.

JONES: Hey, look - there's some sort of storage shed in the back there.  I bet there's a flashlight or something else we can use inside.

DANTONIO: I knew we shouldn't have come out here.  "Let's just go to a steakhouse," I told everyone. "Somewhere nice, though, not just Outback.  Somewhere that makes you wear a tie."  But nobody listens, and now look at us.

JONES: Mark, please just shut up - I need to concentrate if I'm gonna pick this lock.

DANTONIO: Boy, we sure are pretty high up here.  Must be four, five thousand feet above sea level.

DANTONIO: You can really feel the air up here.  It's just cleaner.  There's something about it. 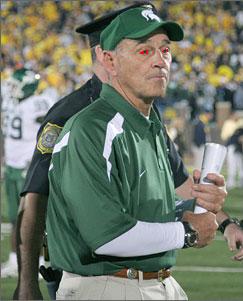 THE TERRIFYING PHANTOM OF JOHN L. SMITH: As I was saying, June.  Up so big, I just can't help it.  I need to choke.  And choke.  And CHOKE.

(Unaware of the fates befalling their brothers, USF HC SKIP HOLTZ, Butch Jones, and TULSA HC BILL BLANKENSHIP walk the halls of the castle, stopping to admire the well-polished suits of armor lining the corridors.)

JONES: Wow.  This one says it was worn by the Duke of Burgundy during the Battle of Bouvines in 1214.  Your dad ever tell you about that one, Skip?

BLANKENSHIP: Guys, we really should keep looking for the fuse box.  I can only imagine how scared poor Lane is.

JONES: And this mace may have been used at the Battle of the Gates of Trajan in 986.  Hey Skip, wasn't your dad in class of 987?

BLANKENSHIP: Seriously, Butch, knock it off.  Skip, he didn't mean - aw, come on, Skip, quit horsing around and take those off.

HOLTZ: Fellas, I just have one question I want to ask... 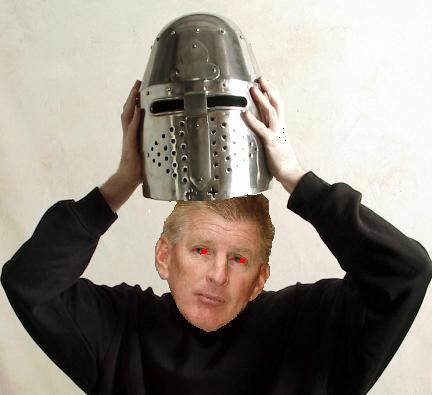 THE HELLISH WRAITH ONCE KNOWN AS JIM LEAVITT: ...why do you keep hitting yourselves?

(Their screams are unheard in the castle's dungeon, where WISCONSIN HC BRET BIELEMA, David Cutcliffe, and VIRGINIA HC MIKE LONDON remain unaware of the danger they most certainly face.)

CUTCLIFFE: It's sort of creepy to store all your party supplies in a dungeon, but I guess it's not really good for its intended use anymore.  Maybe we can at least find candles or something in one of these.  Bret, for the love of - quit playing with that Mardi Gras shit.

CUTCLIFFE: Mike, ignore that dumbass.  Mike?  Hey, London, where the hell did you go? 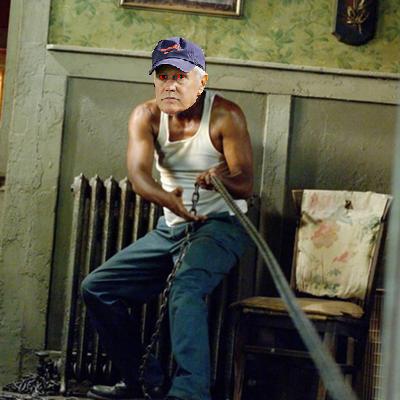 THE DARK APPARITION OF AL GROH: Gentlemen, it's not about offense, or defense, or special teams.

CUTCLIFFE: Jesus, Al, I thought we killed you for good!

GROH: No, it's just about one thing.  (He releases the chain.)  Grohmentum.

(Realizing they are in great peril, the remaining buddies - Lane Kiffin, NEW MEXICO STATE HC DEWAYNE WALKER, and Houston Nutt assemble in the parlor, desperately searching for an escape route from the haunted castle.)

KIFFIN: There has to be a way out of here - a way to call for help, or a book you pull that opens up a secret room, or a magical wishing spell!  (He clicks his heels repeatedly and spins in circles, weeping.)

WALKER: Lane, I'm afraid this is much darker than that.  Look at that portrait above the fireplace. 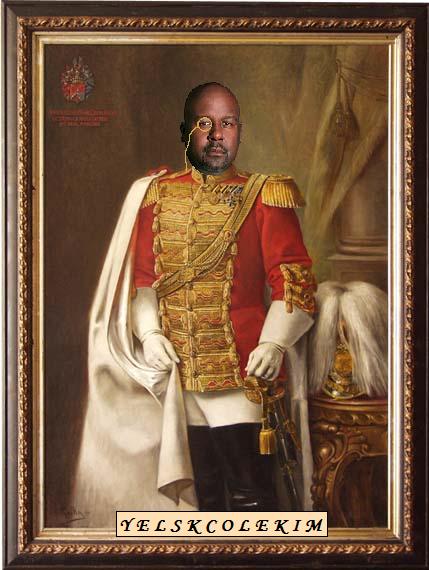 NUTT: My god...how could we not have noticed before...Yelskcolekim.  It's "MIKE LOCKSLEY" in reverse.

WALKER: We're under his power, and we won't get out until he gets what he wants.  I suspect I know what that is.  I'm sorry, Mike. When I helped beat you, I didn't know I was breaking more than a losing streak against a rival - I was breaking a man's soul.  Please, let these two go, and find a way to forgive me.  (He flings himself out the window.)

THE MADDENING SHADE OF MIKE LOCKSLEY: The fool!  No, though he was a total dick who deserved a good punch in the face, I did not assemble this army of hellbeast former head coaches just to waste on the dude with a 5-21 record.

LOCKSLEY: Silence!  Enough of your pitiful invocations!  No, Nutt, even if you were our prey, we hold no power over you.

NUTT: But...but why?  What makes me different from all the other coaches you've killed today?

LOCKSLEY: It seems you are something of a daywalker, Nutt - both an active and employed head coach and, at the same time, not.  For the time being, you exist between worlds.  Though I think we both know it's a matter of time.  Now Lane, on the other hand...Lane we are most interested in.

(Mike Price emerges from the shadows)

PRICE: Oh, but you did, Lane.  While the rest of us worked like dogs just to get jobs at WEBER STATE, you just waltzed into Knoxville and got the job for seemingly no reason at all.  And, once you had the golden crown so many of us had dreamt of wearing, what did you do?  YOU PISSED ON IT AND THREW IT AWAY FOR NO REASON.

LOCKSLEY: All while better men like Coach Price were shuffled off to godforsaken hellholes like El Paso.  And why?  Because he loves stripper tits?  Who doesn't love stripper tits??  Mike agreed to help lure you here in exchange for an interview with Ohio State this offseason.  We knew you'd never come alone, but the sacrifice of your fellow coaches was a necessary evil. No, Lane, we cannot be at peace as long as you sit atop the college football mountain.

(Price pulls a gun and aims at Kiffin.  He squeezes the trigger, when at the last moment...)

PRICE: Wha-what's happening?  Locksley, why are we disappearing?

LOCKSLEY: We killed one of our own, Price.

(They disappear into the ether.) 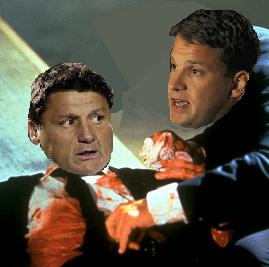 KIFFIN: You saved me, Ed!  But why?  Aren't you more like them - a fallen head coach, driven to madness?

DACOACHO: (coughing up blood) DaCoachO only pawn in game of life.  (He dies.)

KIFFIN: (fights back tears)  Hey, Houston - can I ask you something?

NUTT: Sure, Lane.  Anything.

KIFFIN: It's cool if I bang his wife now, right?