Share All sharing options for: LES MILES' YEAR HAS BEEN PRETTY SPECTACULAR

The Cottton Bowl will be the final game played in the football year for LSU. Their coach is Les Miles. He's pretty fun!

There was the time he tweeted this in 2010. Les is down with the Tweeps! 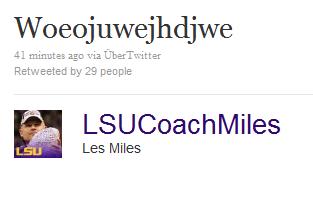 That was pretty fun. Then, there was the time his team did this. Les can bend time and minds!

Les also made a statement on the Gulf Oil Spill earlier this year. Les is ecological! 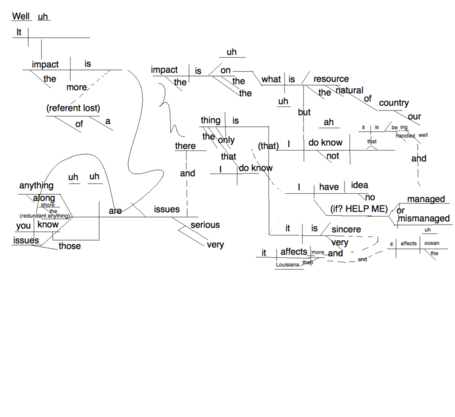 Les also fused the best elements of basketball and football in an innovative new offense he ran at Florida:

Les Miles is also an advocate of being one with the Erff (click to see what you already know is there):

Les Miles even innovated the art of clapping, something that we humans have been practicing unchanged since antiquity.

Fingers out to avoid accidental injury to valuable digits? Les is down with safety!

If any one coach had done any of these things in a single year we'd deem him noteworthy, but we fear the community as a whole might have become numb to Miles' versatility and constant invention. He did this all in the football year 2010-2011, enough oddity for most other coaches in a lifetime. As you watch the Cotton Bowl tonight, take time to appreciate the bimonthly wonder of Miles' mere being. He eats grass. He calls fake field goals. He just keeps being his freakball self year in and year out without apology or variance.

The El Nino of coaches cannot be predicted with any exactitude. You know he's arriving sometime in the fall. You know his effects will be both dramatic and erratic. You know that he will be a force. You may not know whether that force will knock your house down or water your crops, but he's coming whether you like it or not. While watching the Cotton Bowl tonight, appreciate The Boy for what he is year in and year out, especially since he'll be coaching against the Human UPC Code, Mike Sherman. (If Mike Sherman dies before the game is over, please tell his wife..."hello.")