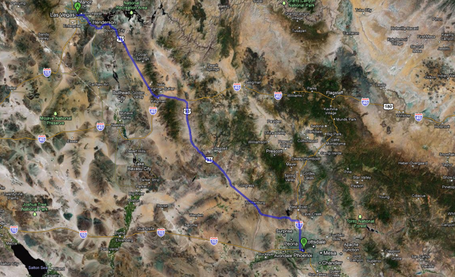 That's the beautiful five and a half hour stretch of grand American nothing between Las Vegas and Phoenix, Arizona, the last leg in the Good Hands Roadtrip and our path to the BCS Title game. We'll be in Vegas on Saturday night and driving in on Sunday, so don't be a stranger either on the Twitter (@edsbs) or in real life if you're around, especially since we'll be with Karlos Dansby on Monday at the Upper Deck Sports Grill from noon to 1 p.m. MST for the ticket giveaway, Q&A and trivia before the game. THAT'S RIGHT WE SAID TICKET GIVEAWAY. Save yourself a few grand and show up.