ARE YOU READY KIDS? 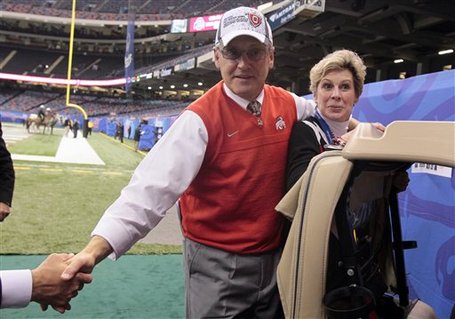 Victorious and dapper and court-eous is he---

He likes to do nothing and run out the clock---

That's still enough to punch Hawgs in the cock!

It was one of the uglier games you will ever watch without regret, since Arkansas dropping balls like a bingo tumbler and Jim Tressel nearly Tressel-ing away the second half lead can't qualify as brilliant execution, but oh my was that entertaining. Cameron Heyward spent the evening donating his services to building levees out of dead Arkansas linemen because he is just that dedicated to service, while Ryan Mallett spent the long hours on Bourbon Street afterwards getting "O-H!'d within an inch of his life and plotting the murder of all of his receivers.

Eleven Warriors dubs it a classic; Along the Olentangy concurs, though neither would if Ryan Mallett hadn't made the likely final pass of his career at Arkansas his worst one. We've never liked watching Terrelle Pryor play football, and still hated watching him strain against the straitjacket of Tresselball last night, but he was efficient and cruelly so last night. He still didn't deserve the MVP, but whatever: a million eyes know damn well Cameron Heyward from his trail of dead, and will respect his power and cruelty from this point forward.

As for Arkansas? Utterly and completely devastating is just a start. It was the worst big game played by a quality receiving corps we've ever seen, and wasted a 139 yard performance by Knile Davis in a flurry of flubbed passes. The only comfort is that Arkansas has come a long way already under Petrino, will continue to improve, and provided some quality spectacle for screencappers last night.

DAVE BRANDON IS NOT NOT MAKING THINGS UP AS HE GOES. Clearly the Michigan conclave has hit some kind of snag. Perhaps Rich Rodriguez and Dave Brandon are playing a game of Monopoly for his soul, and if Rodriguez countered the aggressive Marvin Gardens development by Brandon by splitting Park Place and Boardwalk and staking up on the red properties, man, we could be here for weeks. Perhaps they're attempting to sell the trustees, boosters, and President on paying Jim Harbaugh more money--more than $5.2 million, the offer John Clayton reported on ESPN--than any college coach working today. Perhaps they're just buttoning things down until they can announce Rodriguez's firing and his eventual replacement in one single fluid wave of the administrative wand.

BE SMARTER THIS YEAR. I.e., by learning pattern reading and progressions properly, son. Chris also has the malevolent game-planning TCU used to knock off Wisconsin, how that scheme was blown on the two-point conversion, and how it all worked out anyway thanks to Tank Carder's freaky finger-tip of the pass. On another strategic note, that was pretty neat of Jim Tressel to pass to his tight ends last night, since they can catch balls and stuff.

YOUR BROWSER WILL DIE. Bois' epic list of the best sports gifs of 2010 may seize up your computer, but like a lot of things that end in seizures, it's completely worth it.

FOOD NETWORK IS INTERESTED. Miami of Ohio interim coach Lance Guidry is in limbo right now, but he's coping the way Cajuns do: by cooking (and drinking, but that's off-camera.)