SCENE: A FROZEN POND. She looked out and watched him go. She told herself she could not watch him. It would be too painful, and she would fall through the ice and into the cold water from the weight of everything in her heart. He stood by her, and clasped her hand in his.

"You know he has to go. It's the way things are supposed to go."

She wiped her eyes. "Suppose so."

"He's gonna have lots of friends. He's gonna be happy."

They held hands. The winter wind cut across the pond. The boy disappeared over the hill, and they sat there, husband and wife as they had always been, and yet now somehow more different than they had ever been. The mother ducked back into the lodge. The father went to chew logs, since that was all there was to do. 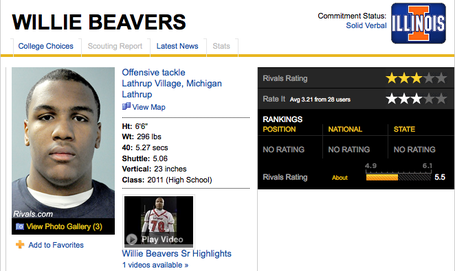 (Of course he's going to Illinois. BEAVERS ARE INTENSE.)

OF COURSE THEY ARE.  Iowa's 13 hospitalized football players--still hospitalized, mind you--tested negative for any illegal drugs. Kirk Ferentz still has not publicly addressed the situation, though I'm sure he will by saying nothing, possibly implying this was the result of the players laziness, or something else from the Iowa Handbook Of Hitting Yourself In The Face With A Cactus Public Relations Handbook. Coaches in the Big Ten will surely be too tasteful to mention any of this when recruiting head-to-head with Iowa on the recruiting trail.

CECIL NEWTON PRODUCTIONS HAS AN ANNOUNCEMENT. Cam Newton will have his own private workout for NFL scouts on February 10th in Los Angeles, and Cecil Newton will charge reporters for something because he is the Daniel Snyder of Showbiz Fathers.

SPEAKING OF BENEFICIARIES OF THIS. Gus Malzahn's Beau Rivage coaching clinic was packed with high school coaches, who presumably showed up to see Malzahn do his live version of "Roc Boys," since he is reppin' just to show that one of them can make it. If you should like Malzahn for anything, it's for his systematic embrace of chaos on the field. The Darren McFadden TD pass in the 2006 SEC Championship game?

Malzahn also showed film of an Arkansas play from the 2006 SEC championship game against Florida, when the Razorbacks’ Darren McFadden improvised on his own, taking a snap in the Wildcat formation and throwing to teammate Felix Jones for a touchdown.

"Darren got to the sideline," Malzahn said, "and said, ‘Whaddya think about that, Coach?’ I went, ‘Way to go, baby."

If and when he gets a head coaching job not under the filthy thumb of the swamp real-estate kleptocrat scoundrels who fund the Auburn football program, this blog will fully endorse every insane move of the Malzahn-bone.

WELL HE DID ATTEND THE MIKE GUNDY SCHOOL OF MANHOODERY. Kendall Hunter is impressing at the Senior Bowl, particularly because he can pass-block, the skill which is to pro scouts what "showing up on time and wearing a nice tie" is to the regular world.

NO, RALPH FRIEDGEN IS NOT GOING TO COACH THE OFFENSIVE LINE AT GEORGIA. Why the hell he would do this when he's been a head coach, and would slide to offensive coordinator at worst in any future assignments? Besides him having a lake house within slightly inconvenient driving distance?