Share All sharing options for: IOWA, CARGO CULTS, AND CONFUSING YOUR VARIABLES 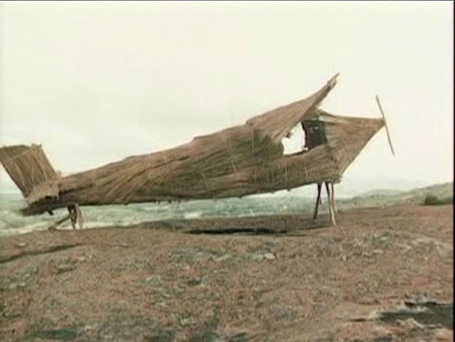 We have certain intellectual heroes. One is Richard Feynman, the bongo-playing, safe-cracking, and utterly brilliant Nobel Prize-winning physicist responsible for some of the best, most accessible lectures about science ever made. There are only about five trillion awesome stories about Feynman, but our favorite involves him predicting a test rocket will splash into the Pacific due to shoddy math. He did this after he worked out said math himself in a matter of minutes in his head. Then he happily walked out of the room and went to Las Vegas to gamble, and the rocket did indeed crash into the ocean as he predicted (like a boss.)

Feynman popularized the term "Cargo cult science," a catchall term using the concept of the cargo cult to explain what he thought were horrible, pseudoscientific approaches towards problem-solving. To fill out the Feynman thumbnail sketch a bit more, he intro'd the concept at a commencement speech at Cal Tech using an anecdote about hitting on a nude woman at a famous hot spring in Big Sur, California. No scientist has ever rocked harder.

I think the educational and psychological studies I mentioned are examples of what I would like to call cargo cult science. In the South Seas there is a cargo cult of people. During the war they saw airplanes land with lots of good materials, and they want the same thing to happen now. So they've arranged to imitate things like runways, to put fires along the sides of the runways, to make a wooden hut for a man to sit in, with two wooden pieces on his head like headphones and bars of bamboo sticking out like antennas--he's the controller--and they wait for the airplanes to land. They're doing everything right. The form is perfect. It looks exactly the way it looked before. But it doesn't work. No airplanes land. So I call these things cargo cult science, because they follow all the apparent precepts and forms of scientific investigation, but they're missing something essential, because the planes don't land.

So it's a kind of blasphemy to mention something as awesome as the invincible brain of Richard Feynman in association with football, but its required when dealing with something as scientific as the training of the human body. More specifically, the concept of cargo cult science has so come up when people writing about the Iowa Rhabdomyolysis situation, since the confusion of variables in the case would make a middle school science student weep.

(We promised a while ago not to fisk Dennis Dodd but dammit, if it's for science, it's a moral imperative.)

The writing won't be at issue here. That's a matter of taste, and if yours is awful we have no advice for you or help.

Variables, however, are up for discussion. It's fine to stress the importance of not killing football players in offseason conditioning. You might consider that an obvious statement, like "Don't run over babies," and "lighting your penis on fire is a bad thing." You also wouldn't think you'd just throw trash out your window, either, but that entire half-empty bottle of Peak antifreeze we found on the sidewalk this morning is proving yet again how important it is to reinforce seemingly obvious things to the general populace. (Seriously. A whole goddamn huge bottle of it. In 2011.)

Some people wait a few paragraphs before confusing two entirely different issues, but give this piece its due: it jumps right into the confounding of different issues into one impassioned and completely wrong argument from the start.

The annual window of death in college football basically opens this month. And it's all completely accepted. It is a part of the football culture -- winter conditioning, offseason conditioning, summer conditioning. All of it. More specifically, The Kill Season begins in January and stretches to the beginning of fall drills in August. That's a long time for anyone to be at mortal risk, but it's true. There are 21 souls practically screaming from the grave. They represent the number of non-traumatic deaths in NCAA college football since 2000. All but two have come in that January-August window.

We doubt seriously death is considered an option by any training staff. If you find it on a wall next to forty times, please document this and submit it as data. Chuck Amato used to joke about it at Florida State, true--and then Devaughn Darling died, a victim of the fatal combination of an intense series of mat drills and sickle cell trait. Ten FBS players have died in offseason drills since 2000. This is that list, condensed from this list of every FBS or FCS non-traumatic death since 2000.

Keeley Dorsey, USF. No specific cause, according to medical examiner. Possible congenital heart defect is suspected.

So when you turn and use the Iowa case--a massive rhabdomyolyis case affecting 13 players--you're snowballing, or to paraphrase Feynman, you're making a fake runway and headsets out of bamboo and expecting the plane to land with all the magical answers aboard.

Someone should be fired at Iowa, since a 13 player outbreak of rhabdo is the result of shoddy oversight, bad workout design, or both. We're just focusing on this variable alone, since we like to talk about one thing at once. You're supposed to work football players hard, but not so hard as to put thirteen of them in the hospital. (There's that half-empty tub of antifreeze sitting on the sidewalk again. Reminder: no setting penis on fire, especially yours.) If the trainer isn't canned for this, then they'll suffer on the recruiting trail and in living rooms with concerned parents, and yeah, he's probably done.

We repeat: Rhabdo (as its friends call it) is the result of overuse and/or intensity, among other things. (Iowa players probably aren't put in buildings and then bombed to test their toughness. If so, Mark Emmert's NCAA is probably okay with this because there's not a specific rule against bombing players as part of a workout regimen.)

This was not bad programming in the individual sense: the 100 rep squat at bodyweight or thereabouts is a long-established leg workout for lifters (Steve Reeves, aka Hercules, loved it,) though whether football players need to do it or not is a perfectly legitimate question, as is the issue of whether they should have done it for time. That's another debate; what's important here is that it is not unique, it's not a pre-existing condition, and it's something your program did to someone going through it.

This happened as a result of bad program design and inadequate monitoring, most likely. The other scenario is that Iowa players were all on some insane Mexican rooster hormone that caused this, and with the recent debacle concerning drug testing there it seems highly unlikely. Then again, slim as the chances might be: there goes another antifreeze bottle out the window.

The other is the stack of oft-cited dead football players. At the FBS level, the best evidence points to an ongoing lack of supervision of sickle cell cases and congenital heart defects. Sickle Cell is already a mandatory screening for NCAA members, and has been since April 2009. It remains a tricky issue, though. Sickle cell's most pernicious effect is exertional sickling, where red blood cells change shape and block vessels and arteries in intense conditions like those you'd find in off-season conditioning drills.

Heart defects are even trickier to spot, especially given the lack of medical attention many poorer recruits might suffer growing up without access. They also happen to be very subtle in many cases, and may escape detection.

The lone case not covered by these is the asthma-related death of Rashidi Wheeler, which is here, is very sad, and again is a matter of lack of oversight, negligence, and tragedy.

So there: you can pull this apart and actually look at deaths during conditioning as a matter of medical screening and conditioning oversight, or you can just scream AHHH VOICES FROM THE GRAVE and confuse two entirely different variables at the same time in the name of an easy emotional pitch. We didn't think dead young men needed any additional dramatic window dressing, but then again, we're not the ones looking to the sky with the bamboo antenna on, hoping for magic when science will do just fine.