UniWatch has these for each old-school conference, and of course by link law you should peruse every single one of them for repeated clicky goodness. They're from 1969, so any jokes about racism are temporally relevant. 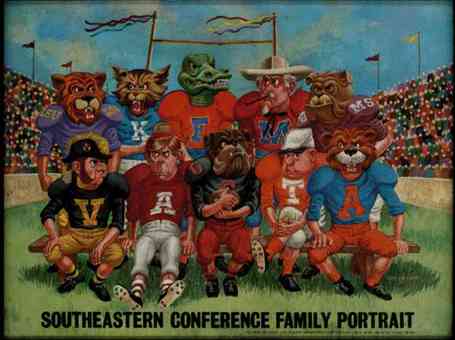 From the top left:

LSU: Ideally portrayed since the expression is caught somewhere between "Dammit, don't hog the boudin balls" and "I'm going to set you on fire because you look like you need settin' on fire."  Note that he appears to be staring with two enraged eyes at the Ole Miss Rebel. That is the very embodiment of pure walking murder fired up on butter and homemade catfish wine.

Florida: Clearly high. Distracted by the smell of someone cooking hamburgers three blocks away. Won't really start paying attention to anything until 1990 or so.

Ole Miss Rebel. Either staring back with rage at the LSU Tiger's leer, or at that liberal bastard LBJ standing right off camera. Alternate theory: may be pooping out a fifteen pound lugnut swallowed on dare.

Auburn. Almost unrecognizable here, but the smile clearly indicates they most definitely have not set up an appointment between a recruit and a backpack full of cash in a bus locker in Opelika. Nope, totally not involved in that PAAWWWWWLLLLL----*

*Knows what this expression is despite FInebaum being decades away.

Tennessee. Proof that Phil Fulmer wasn't so much born as he was spontaneously generated from the very animal spirit of the Tennessee football program. Looks slightly agoraphobic, and this makes sense due to the fear Tennessee had of a wide-open passing game until well into the 1980s.

Georgia. Clearly outraged at the black jerseys, which even in 1969 they know bode nothing but ill for them in future years. Also staring longingly at a huge vat of skin bleach it will begin using sometime in the 1970s to attain maximum crackery whiteness.

Alabama. The best embodiment of any of these, since Bama Man is clearly a sunburnt white guy drunk to the gills and staring furiously at something whose ass desperately needs kicking. He even looks like a reform school John Parker Wilson, and may also be staring at the goddamn LBJ standing right off camera. (May not actually be LBJ, but instead a tree that looks a lot like the gnarled visage of LBJ. As we said, he's clearly hammered to bejeezus here.)

Vanderbilt. "I don't even know what I'm doing here," an expression and sentiment that has aged very well since 1969.