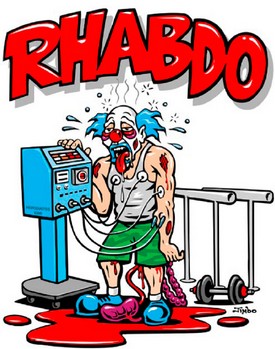 The Iowa football team just met the unfortunate figure of Uncle Rhabdo, short for the molesting family member of the medico-athletic world known as rhabdomyolysis, a nasty kidney condition resulting from extreme exertion breaking down your muscle fibers. This sends myoglobin into the bloodstream, which gets in the pool filters of your body, the kidneys, and if you've seen a busted-ass pool you'll understand why Iowa players were posting about their piss turning brown and how 12 of them are hospitalized for the condition.

Onset of rhabdo is obvious, but the causes can be hard to pin down as in "exactly what you were doing to do this." Like most football programs Iowa works out often and hard, and does a lot of diverse things to condition their athletes. Their offseason workouts have been brutal, including a sled drill and squat routine that had observers marveling at the seas of puke, but to say this couldn't happen at your program is insane--unless we're talking about Penn State, aka "The House of Cybex." Pretty sure this is not happening at PSU.

(The Uncle Rhabdo cartoon is a running Crossfit joke. BLEEDING KIDNEYS FALLING OUT OF YOUR ASS HAHAHAHA.)

RICH AND DUMB ARE NOT NECESSARILY EXCLUSIVE CATEGORIES OF EXISTENCE. This is yesterday's news, but let us repeat: a rich man who knows a lot about "managing  wealth" pitched a "massive hissyfit" over his university "hiring an old but good coach" instead of "Steve Addazio Football Wasting Disease" and now "wants his money back." He is apparently unaware that Pasqualoni "employed Addazio" and "has actually won football games at the college level," and again "this guy wanted to hire Steve Addazio."

This is an inspirational story for the stupid, since if you are stupid or know someone not smart you should show them this story and say, "Hey, you too can manage capital and make big dollars!" You can also hire Steve Addazio to do your yardwork, Robert Burton, and come home and find your hedges on fire and your lawn filled with weevils, and listen to him assure you that "It's all fine, man."

BUT DID HE CURSE? We mean this with all due respect, but Kevin Fucking Scarbinsky's piece here is the shittiest shit piece of goddamn filler we've ever fucking seen this side of OMG SLIDESHOW. Damn is not a profanity. "Facefuckingest" is a profanity, and a great one, now that we've typed it.

BCS GET MONEY SON. The BCS paid out $170 million to the Greater College Football Co-Prosperity Sphere, and now let's talk about how much more this could be and how this would not at all make things infinitely more complicated and evil if we tripled the money and had a playoff. We're officially playoff agnostics, but let's not pretend things wouldn't get even more cutthroat, sort of awesome, and sort of awe-inspiringly evil in this scenario. Somehow it ends with Nick Saban shooting hurt players like downed horses, or at least it does in our imagination. "I'm sorry son." [Loads bullet reading "medical redshirt" into gun.] [Grimaces.] [Fires.]

AU REVOIR STAN (AGAIN). Florida RB coach Stan Drayton is off to Ohio State, and here's what you need to know about him Ohio State: he's a decent coach and a much better recruiter, and that's why you're hiring him. Urban Meyer wasn't big on letting guys do their jobs without interference, so his player development at Florida probably isn't indicative of his skills, but recruiting is his speciality and he excels at it. (It's not like Ohio State likes using "offense" or "wide receivers," anyway.)

HOUSTON NUTT GOES HOLLYWOOD. We hope he's successful, since it might lead to the charismatic preacher cameo we've always wanted for Houston Nutt.

Delays this week brought to you by travel. We're typing this from a flight from Dallas to San Francisco on Virgin America, and this purple mood lighting is so Prince 1984 it's making us want pancakes and lace with a fierceness.