Share All sharing options for: FULMER CUPDATE: PLEASE HAVE A SEAT, OKLAHOMA SOONERS. 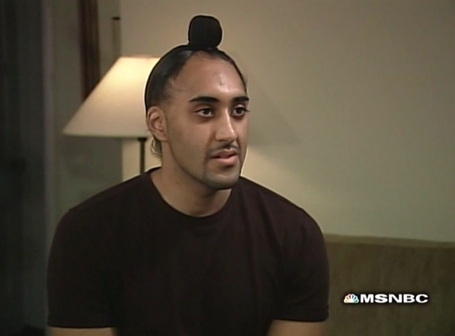 We tuned in to a nationwide craze last night: not To Catch A Predator, but to the mass live-tweeting of the show, which really is a joy and a privilege to participate in since people point out all kinds of wonderful details surrounding the basic snare-and-scold thing Chris Hansen works so well. (Twitter search #TCAP: it is magnificent.)

For instance, have you ever noticed the jean shorts-to-perp ratio? It's damn near one-to-one. It's like, when hitching up their underwear at the computer, the victims think, "It's a pretty special day. Better wear the clean jorts for this underage sex safari, because I need durability AND style" Don't make the comment, because we pre-empt it for you ARP JORTS GATOR FANS LIKE IT YOUNG. (By record, btw, that's also an Ohio State claim, and a documented one. B-1-G! B-1-G!)

Also, we like the guys who bring sandwiches, because is anything really a crime when you get a sandwich at the end? We didn't think so.

Anyway, while we were doing this Bob Stoops was popping around the corner from the porch with the hot tub and saying "Please, have a seat" to freshmen Kenneth Stills and Tony Jefferson, since he had some things he wanted to discuss with them. Stills was arrested on a misdemeanor DUI complaint at 2:00 a.m. Saturday, while Jefferson was given an "interfering with an official process" charge. You probably get this charge when you are a large drunken football player telling the police to "leave my boy alone," a sentiment that might come out as you butting in tipsily over and over again until the cops give you a citation and threaten you with tasing.

For falling for boozy college town entrapment, the Oklahoma Sooners receive one point each for each misdemeanor here, and thus earn two points in the Fulmer Cup Standings. You're free to walk out the front door, boys BOOM TASERED BY THE LONG BEACH POLICE DEPARTMENT TAKE THAT PERP---