THE HAPPY FOOTBALL LIFE OF WILL HILL

Share All sharing options for: THE HAPPY FOOTBALL LIFE OF WILL HILL

Urban Meyer wasn't paying full attention in his final year at Florida. The 8-5 record of Florida and complete trust of the program to Steve Addazio should have been enough of an indication of this, but further evidence is submitted by this weblog of record in the form of Will Hill's public and completely open Twitter feed.

If a coach were paying attention and cared, it's not that the account would have been made private. No, no. This account would have been burned, and the player associated with it shot into the sun as an example to others. Instead, Hill was clearly asked not to tweet during the season, since he trails off after September (when he was suspended for violating team rules,) only picking up again in January when he declared for the NFL draft and left classes at Florida.

Examples, samples, and highlights follow. You know the image you have of a student athlete's life being one long chain of blow jobs, massages, and constant sexual adventure? This should contradict all of that HAHAHA WE KID--It's all blow jobs, weed, and random thoughts about babies' frustrating fragility.

THIS WAS WILL HILL'S PROFILE PICTURE. 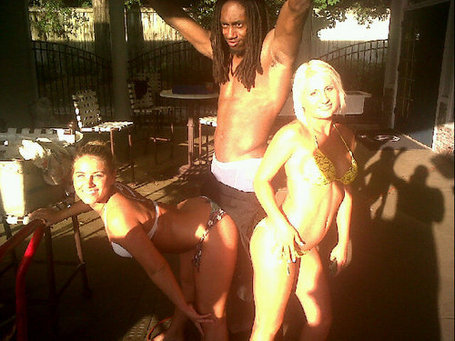 Will Hill was born excreting a powerful adhesive from the pores of his skin. This adhesive sometimes spread to his hair and his clothes. If you thought his tenure at Florida was disappointing before, please adjust your disappointment appropriately with the introduction of this new information. Also, sometimes tiny girls in bikinis became attached to him. It's a matter of chemistry, nothing more.

WILL HILL HAD A BUSY SOCIAL SCHEDULE

We hope this was not his male roommate or a University of Florida parking cop come to ask if that was his car illegally parked in the orange lot. That could strain a relationship...or maybe be the spark that starts a raging fire! Do not ever knock on Will HIll's door ever, because this means you are ready to make love, or better be. Urban Meyer made this mistake once in December 2009, and has experienced a burning sensation in his trachea ever since. (And one in his heart. [eyes flutter])

WILL HILL IS INTO COMPARATIVES NOT ABSOLUTES

Whatever food was given to him prior to this moment in time will be considered better than the food given to him at this instant. This is what great men do: they do not establish benchmarks, but instead constantly re-evaluate horrible food against the current horrible food they suspect is the worst ever, but do not want to confirm as the worst ever. He's also sourcing this to the Sydney Morning-Herald, and thus embracing responsible news-sharing protocols, but would a proper link kill you, sir?

WILL HILL IS FASCINATED WITH MOBILE USE OF HIS DEVICE

There are multiple references to receiving oral sex in a car. We don't really understand the fascination: after all, unless you keep your car very clean there's the possibility of noticing that Subway wrapper you just threw down in the floorboards, and seriously you still live like a retarded wolf after all these years, don't you? Worse yet, you may start eyeing spare CDs the girl left around the car, and that's when impotence begins. We don't care how attractive a woman is: the instant you see a Jason Mraz CD with obvious wear and tear on it is the moment romance fucking dies.

"Sour" here either refers to "marijuana" or "something that's sour." We choose to believe the latter, since the very literal interpretation of Will Hill blowing on a horn made of winter melon and lemon rinds is a way funnier image, like a black braided Neptune of the highways getting head from your mother. (And it is your mother we're talking about here.)

Having lived in Gainesville for four years, let us say: this could be anyone, Will.

WILL HILL DEMANDS TO KNOW WHY YOU ARE NOT UNBREAKABLE, BABY

I THOUGHT THOSE LITTLE BASTARDS WERE UNBREAKABLE LIKE WOLVERINE---

WILL HILL SEES ALL AND JUDGES APPROPRIATELY 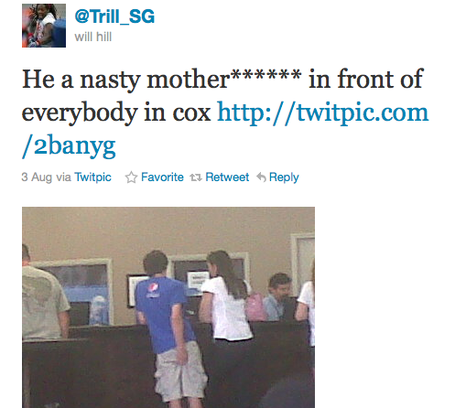 This is just a fine piece of citizen journalism by Hill here. No critiques; five stars and EGOT and raves all around.

WILL HILL SAYS TO REALLY RUB THE PUERTO RICAN IN THERE

What makes this massage really special? The Puerto Rican-ness of it. Really rub the Puerto Rican in there, lady. This could mean "public relations" chick, too, in which case the University of Florida media relations department has some serious training to do regarding boundaries and players. ("He excretes a natural adhesive, sir. It wasn't my fault, but nature's.") How a massage involving a Puerto Rican could feel amazing is a legitimate question, since relaxing with the constant blowing of a shrill whistle and waving of multiple Puerto Rican flags can't possibly be soothing.

This has never happened. Ever. Will Hill is a brilliant fiction writer, and the script based on this idea, "Pretty Man," will be in production sometime in 2013 starring Jake Gyllenhaal and Reese Witherspoon as the john and the lucky girl who falls head over hooker heels for the hunky, lonely widower with the magic stick and a tragic heart!

WILL HILL CLARIFIES HIS DEGREE OF HARDNESS

Vladimir Putin has no comment on Mr. Hill's imminent polonium poisoning, but would like to note that going harder than a Russian is theoretically impossible.

AMERICA ARE YOU AWARE OF THE STRANGE BARTER I HAVE BEEN PROFFERED?

The address is what we love here: it's like Bernie Mac addressing America, because a woman making a blatant offer of sex really IS a matter of national importance, especially because Agent HIll will save thousands when he discovers her boob IS REALLY A BOMB EVERYONE RUN--

"See, dawg. Even my feces is fly/ cause I drop 'em in the airport and then take to the sky."

WILL HILL APPRECIATES THE CLEANLINESS OF HIS SHEETS, LADIES.

"You see these sheets? 400 count Egyptian cotton? Madam, this is not a matter of sexual preference. This is about appreciating luxury." "Fire head" is discomfiting, since we hear "oral sex" and "fire" and immediately think "herpes."

Cannibal women: they do not intimidate Will Hill, even when they attempt to literally swallow his children. NFL draft scouts, take note, since that kind of fearlessness is exactly what you want in an NFL safety.