WAIT, BEAR BRYANT HAD THE FACE OF AN ALGERIAN GOATHERDER? 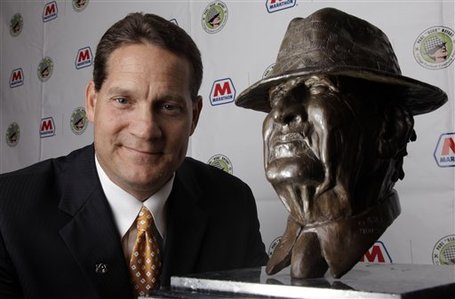 Gene Chizik won the Paul Bryant Coach of the Year award for his work with the Alabama Crimson Tide in 2011 in their undefeated run to the national title. Congratulations to him on his prestigious award. That statue is an accurate depiction of Paul "Bear" Bryant if Bryant spent his life shooing sheep up a tawny hill in the Atlas Mountains, or if he was Vigo the Carpathian.  Shortly after this photo it came to life, turned to its right, and belched fire at Chizik. Chizik is stable and in serious condition at a local hospital this morning. (The statue is awake and in custody, and keeps asking for Chesterfields.)

THE SILKIEST TESTIMONY EVER.  Ron Franklin will now join Mike Leach at the Green Parrot, sipping a dollar beer and waiting for the results of his lawsuit against ESPN to work themselves out in the legal system. (You get a settlement! And YOU get a settlement! And YOU get a settlement!) Franklin's testimony regardless of outcome will be described by the presiding judge as "the most sensual and masculine syllables ever uttered in a courthouse. We are all guilty of contempt of court today because his voice is too ethereal and majestic a bird to be contained by these dingy mortal walls and heard by our flawed ears."

Then, Ron Franklin will call the female court reporter "Babe" and ask the skirt to fetch him some java, pronto. (Via Blutarsky.)

DO NOT FORGET THE IMPORTANT PART HERE.  The best part of the GQ profile of A.J. Daulerio is this:

The blogosphere reacted with vitriol to Daulerio's tantrum. In a post titled "AJ Daulerio Is an Asshole," Brian Cook of the sports blog MGo summed it up best: "Daulerio's an embarrassment.... As someone who runs a sports blog for a living, his wanton flouting of common decency makes me look like an asshole by proxy, and I don't appreciate it."

AL BORGES HAS SEEN SUNSHINE AND HE HAS COWERED IN THE COLD RAINS OF JANUARY. Maize and Brew and CGB discuss Al Borges, specifically his tenure in 2001 as Cal's offensive coordinator prior to the Tedford-bot's arrival. Borges at his best offers up a a pro-style attack with a thumping downhill run game and downfield passing off play-action. He coached Jason Campbell into brilliance; this alone should speak for his credentials, though Ronnie Brown and Carnell Williams had something to do with that, too. At his worst he can look like Bill Callahan at his twiddliest.

HELLO GOODBYE. The firing of Jeremy Bates at Seattle means Miami may already be losing their new offensive coordinator, Jedd Fisch. Fisch is being considered by the Seahawks for their open OC position, and though Fisch accepted the Canes' offer it's unknown if he has arrived in South Florida yet. Miami could complete the circle by simply hiring Bates, who has the not insubstantial resume line of being easily fireable, evidently. We're convinced that he, like [NAME REDACTED] and Mike Archer, is one of those coaches who will keep getting jobs just because firing him feels so right to other coaches. He must make a satisfying noise when it happens.

THE BENEFITS OF UNSTOPPABLE SLOWS. John Brantley, y'all:

The rap on Brantley is that he is statuesque in feet and perhaps brain.