Share All sharing options for: PROP BETS FOR THE BCS NATIONAL TITLE GAME 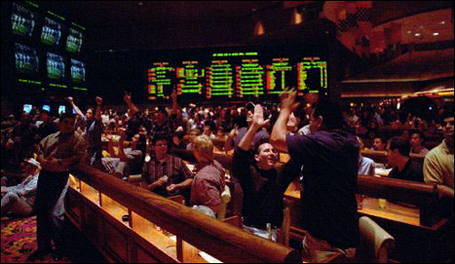 If you're a truly committed gambler, you've probably had your bet placed on the outcome of the BCS National Championship Game for weeks now. If that's the case, you may also have been wracked with paranoia and nausea ever since as the line has jumped capriciously from one team to the other, but that's all part of life when you're riding the dragon. If you haven't had the foresight to get a wager in before now, well, you've still got a chance to fritter money away on this game, just not on the actual outcome. We've put a call in to Jimmy "The Gallbladder" Fratangeli, who's connected with every last bookmaker within a hundred miles of the Vegas Strip, and he favored us with a selection of prop bets that will blow your mind and empty your wallet. Here's a sampling, with our handicaps:

Number of tackles broken on Cam Newton's first touchdown run: 3.5. If you saw Newton's incredible run to daylight against LSU a few months ago, you know there's a very real likelihood of the over here. Add in the fact that Newton has six inches and 125 pounds on the average starter in Oregon's back seven, and notched approximately 54 first downs this season just by falling forward, and you're crazy not to take this one.

Who will be the first player to break loose for an 80-yard touchdown run/reception? Lots of good choices here -- Newton not least among them -- but every time we've watched an Oregon game this season, there's been at least one instance where the Ducks scored a touchdown, we got up from the couch to go get another beer or take a dump, and by the time we got back there were another 10 or 14 points on Oregon's side of the scoreboard, leaving us standing in the middle of the room stammering, "What? Wait, what?!" and wondering if the space-time continuum hadn't had a brownout between our living room and the other side of the house. So Oregon's your best bet here, and if we know anything about Oregon football we know it'll probably be a player we've never heard of. (Actually, for a football fan from east of the Mississippi, that could describe pretty much anyone on their squad other than LaMichael James, and perhaps also their quarterback, you know, what's-his-name.) For that reason, we're putting our money on Terrence McDaniels, a sophomore from Medford, Ore., majoring in chemical engineering. We don't think there's anybody by that name on the football team, or perhaps even enrolled at the University of Oregon, but if there's even the slightest chance that there is, Chip Kelly will find a way to get him into the end zone. 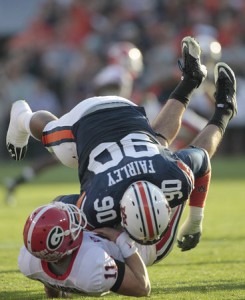 Over/under on amount of time spent in a persistent vegetative state by the first player laid out by a Nick Fairley hit: 9.5 days. We're defying conventional wisdom and going with the under here, not because of any lack of confidence in Fairley's ability to maim and injure, but because one has to take into account the considerable chance that his first victim will go straight from "active" to "deceased" without even taking any detours through Comaville.

Which booth announcer will be the first to make a lascivious comment about Oregon's cheerleading squad? This one's a no-brainer -- Musburger is the obvious choice -- but we hope you got your bets in on this one earlier, because Jimmy informs us it's been taken off the board. 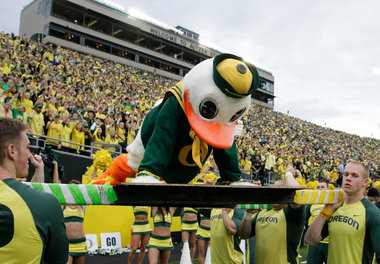 Over/under on the number of push-ups the Oregon Duck will do on the sidelines: 337. First, consider that Oregon's offense is going up against a Ted Roof defense, and that the Duck will be doing one push-up for every point Oregon currently has on the board each time they score. Then you have to add in the number of push-ups that the highly precocious Duck will be doing with a couple of co-eds on his back just to impress them. That makes the over a lead-pipe cinch, and also makes the Duck perhaps the absolute best job available in the otherwise thankless big-plushy-animal-mascotting industry.

How many fire trucks will be called to Toomer's Corner to respond to a toilet-paper blaze tonight? We're going with six, regardless of whether Auburn wins or loses.

Over/under on Pat Dye's blood-alcohol level at halftime: 0.18. Again, not taking the over is basically flushing hundred-dollar bills down the toilet.