Share All sharing options for: BCS TITLE GAME: MR. PRESIDENT URGES YOU TO ROOT AGAINST AUBURN

Our country's finest Presidents join us in asking you to cheer for Oregon in the BCS Title Game. For truth. For justice. And for America. Here's a picture of Cam Newton farting fire and cash out of his ass. The Presidents' own words, as told to Spencer Hall and Doug Gillett, are after the jump. 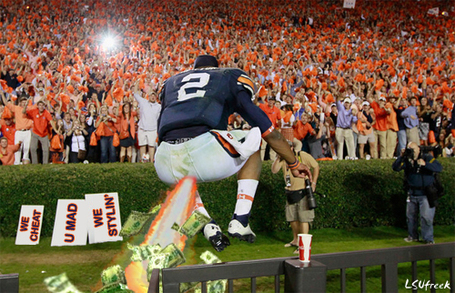 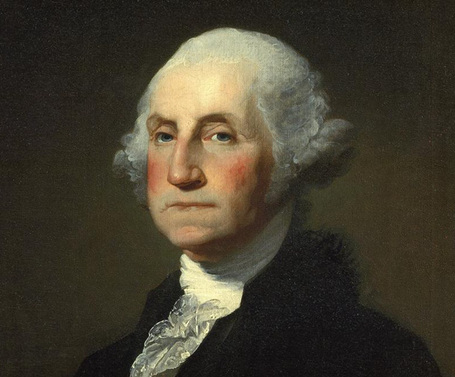 GEORGE WASHINGTON: I believe it is a matter of record and indicative of my opinions on this sportive contest that I once said " Few men have virtue to withstand the highest bidder." But don't listen to me, man, I'm pretty baked at the moment.

For the corrupt to govern is to hand the keys of the state to thieves, be it in the White House or on the plains of the state of Alabama. Auburn's name, beknighted as it already may be, shall take a step further into the abyss with a victorious result for pure venal corruption in sport if-- 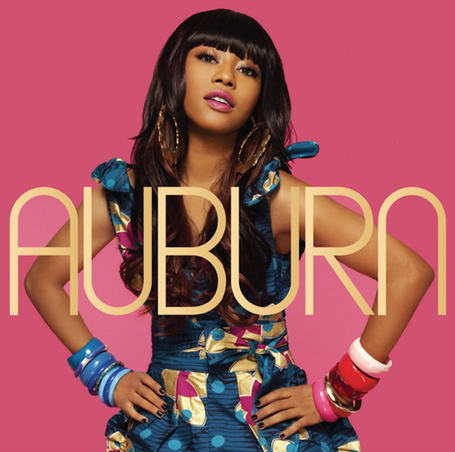 As I was saying, War Eagle! 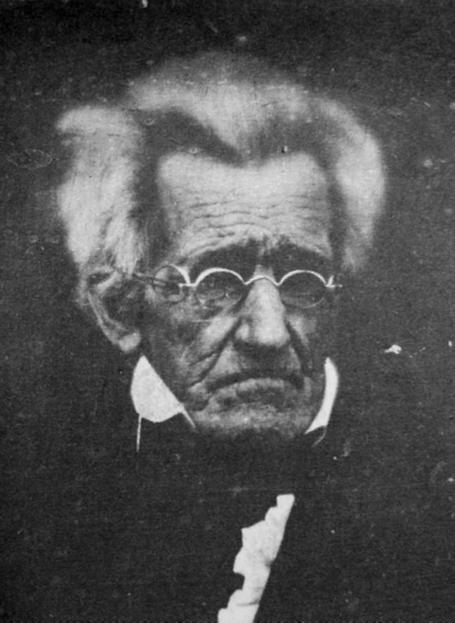 [coughs up a bullet]

WOOOO I'LL HANG UP AND LISTEN!

[shoots street urchin for lookin' at him cross-like] 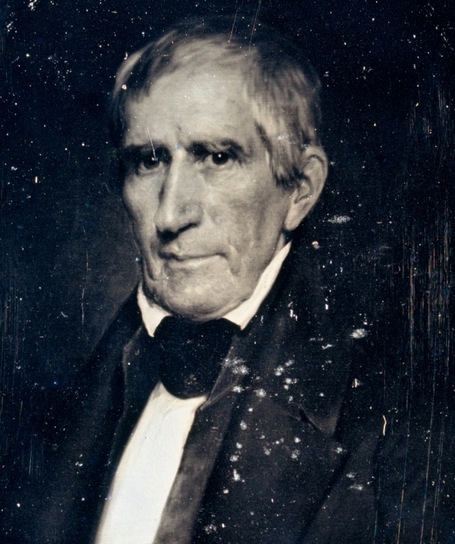 WILLIAM HENRY HARRISON: As I was saying, I---[DIES OF PNEUMONIA MID-SENTENCE] 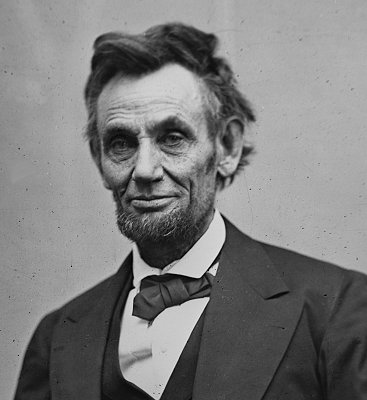 "I know of two ways to quiet the annoying ESS-EEE-SEE cheers, citizens. One is by joining the army of the righteous pulling for our Northwestern countrymen, and saluting them with hale and hearty gusto in this sporting contest. The other way involves my close personal friend William Tecumseh Sherman and his fondness for rambling bouts the Southern highways and byways with his landscaping crew in tow. You choose. I hear Atlanta's LOVELY this time of year." 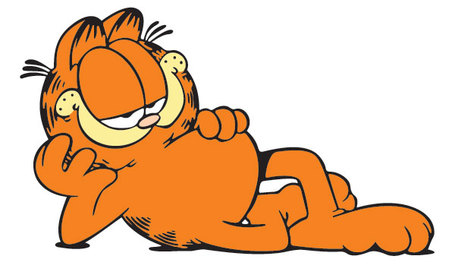 JAMES GARFIELD: Oh god. Just get your fingers out of there--wait, you're not even going to wash those? Really? Hello? Leader of the free world, sure, just take the hands you used to curry brush your horse an hour ago and plunge it right into the old bullet wound there, Dr. Stankdigit. I'm not really going to make it out of this alive, am I? Am I never going to write my name in Greek and Latin with different hands simultaneously again? Am I never to wipe the delicious taste of a Chicago Porterhouse from my majestic beard again? It grows dark, so dark. Angels take my hand: the path is dark, and the path down shines with the black light of hell's furnaces themselves.

Oh, and don't root for Auburn.

Is it Monday? Ugh. 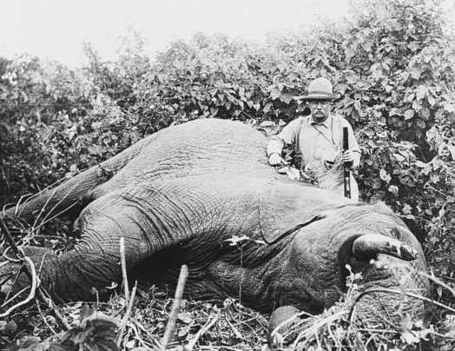 As one of the only animals I was unable to shoot, skin, and then consume in the raw form to fortify my muscles and thus continue my 54 straight years of continuous chest expansion, I can only as a personal matter hope to see as many tigers killed as possible on the field of competition in the Arizona territories tonight. A hunter never forgets. 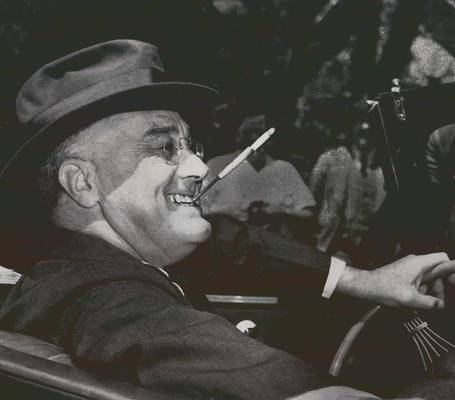 FRANKLIN DELANO ROOSEVELT: "My fellow Americans, I was passionate about the United States entering World War II for many reasons -- the totalitarianism of the Nazi regime, the Holocaust, et cetera -- but one of the biggest reasons was that Adolf Hitler, beyond being a genocidal megalomaniac, was kind of a dick. I knew that if he succeeded in conquering the European continent, even if he never landed so much as one storm trooper on U.S. soil, I would never hear the end of it. It'd be 'I rule the entire continent' this and 'Don't step to the Wehrmacht' that. Well, I implore you all to cheer for Oregon tonight, because if Auburn is permitted to win a national championship, they're going to be the same way. Their smugness and poorly spelled, grammatically dubious smack talk will spread from Atlantic to Pacific, from the Rio Grande to the Great Lakes, and this is something I simply cannot abide. For the sake of college football, for the sake of our national pride, let not this day be a day of infamy; let the Quack Attack cry 'freedom!' from every city, every mountain, every hilltop and hamlet in America." 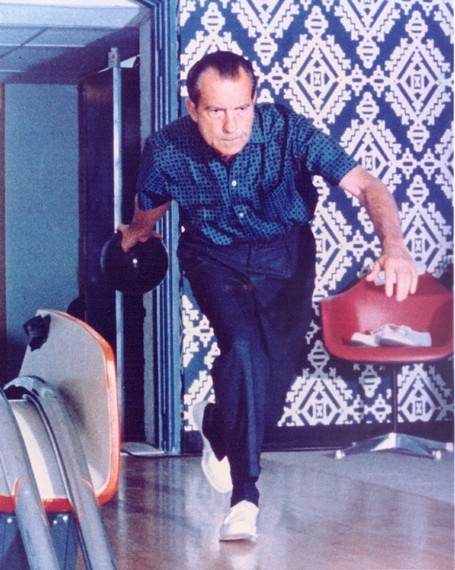 RICHARD M. NIXON: Let me just say . . . [garbled] the title game. The fucking BCS National Championship Game, Bob. That Newton kid, he . . . what? Well, I don't give a shit about his legs or athleticism or anything like that. What I want to know is about the money. Where did they get the money to buy a recruit like that? . . . I'll tell you where: the Jews, Bob. The Jews have gotten their fingers into this and they're going to buy a national championship for the Auburn . . . [several minutes of silence, as if tape had been erased] Lowder is a Jewish name. Chizik, that sounds awfully Jewish to me. Trooper Taylor, I don't know about him, but the way he jumps around and waves that towel, I'd be awfully suspicious of a Black Panther connection there. I want a file started on him. Call Hoover, get the FBI on that one right away.

Oh, and did you have sexual intercourse last night? Because I hope you did. Go Ducks" 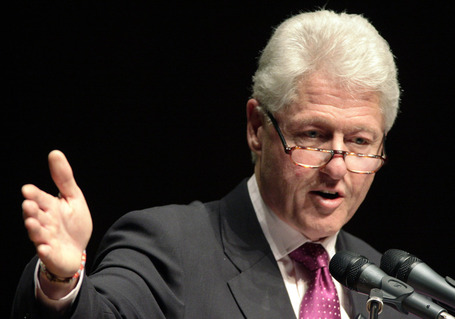 WILLIAM JEFFERSON CLINTON: So, who's the one who likes beating the Beavers? 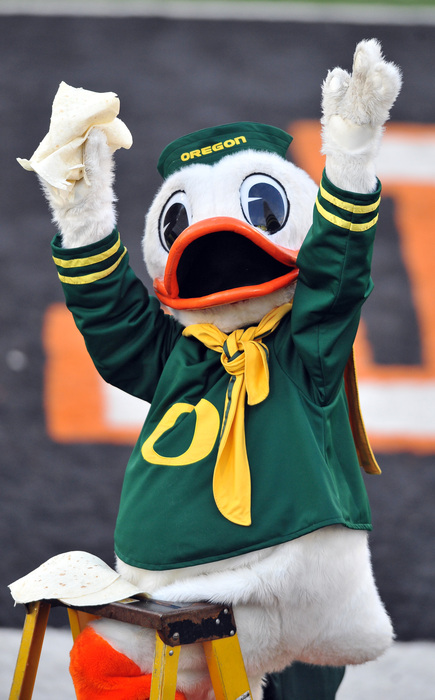 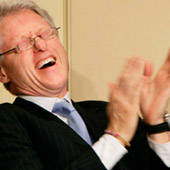 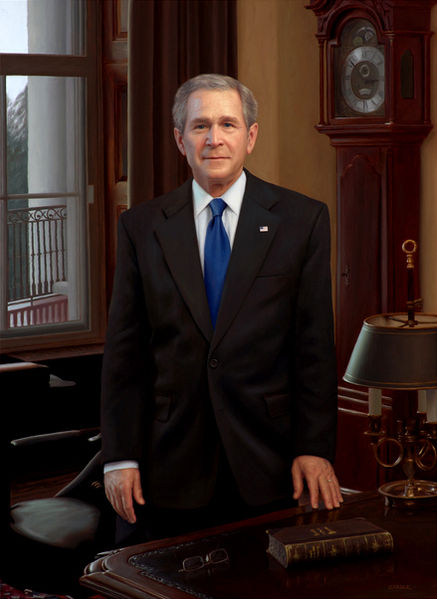 GEORGE W. BUSH: My fellow Americans, in this time of economic heartship and great unsurity about the future of our nation, we need something we can believe in. And I'm here today to tell you that Auburn is that team. With their spread-eagle offense and the historic leadership of coaches such as Gene Chiswick and Greg Malz . . . Malsa . . . Matzoball, I am confident that they have what it takes to win the CBS national championship and any other channels that might be broadcasting the game. So I encourage each and every one of you to . . . [Dick Cheney whispers in ear] Oh. Folks, I've just been informed that the team we're actually supposed to be rooting for is Oregon. So I have ordered an immediate invasion of the state of Alabama to forever conquer the Auburn threat. And in the meantime, go Beaver."