Welcome to the second Factor Five Five Factor Preview of the 2010 season, the Thursday Night Game's custom analysis guaranteed to do nothing but effectively kill time until you can watch said Thursday night game. Don't say we aren't up front about what goes on here every day, reader.

Auburn fans join those who after the inaugural week of the season are currently snorting lines of Smarties off the desks of the school and jumping in unsafe manners off every piece of playground equipment imaginable because....because here stands Opelika, once a city of six million people. What has happened here was caused by a force which up until a few days ago was entirely beyond the scope of Man's imagination, or at least to those how watched Cam Newton and his crappy release as a freshman fire passes a clear well-measured kilometer over the heads of his receivers. Opelika, a smoldering memorial to the unknown, an unknown which at this very moment still prevails and could at any time lash out with its terrible destruction anywhere else in the world, but wouldn't really change how Opelika looked all that much, since shit there's like a Starbucks, the Supper Club, a couple of instabuild chain hotels, and Toomer's Corner. That really wouldn't be all that hard to rebuild.

There were once many people here who could've told of what they saw... now there are only a few, mostly because they're all driving to Starkville for the game to witness the further work of....GODZILLA.

(Via TWER.) Is Cam Newton, aka Godzilla, aka Dameyune Craig without a growth hormone deficiency, going to be the big chunk of God's radioactive wrath unleashed upon the Arkansas State defense, passing for 3 TDs and adding 171 yards and two scores on the ground? He's unlikely to reproduce those kinds of numbers against Mississippi State, both because Mississippi State's defense--while middling in statistical terms last year--is at least a few shades closer to the set of power lines able to at least slow Godzilla in his epic struggle to purchase an affordable laptop at bargain prices make a smoking model city of his opposition.

Oh, and critics of GUSTAV can continue to insist his wacky, pass-heavy offense won't work in the SEC, since he did continue his dodgy, tactically unsound ways by running 49 times to 16 passes total for the Tigers in amassing 608 yards last week. He's like Mike Leach's evil twin crossed with Hal Mumme's baldspot, we tell you! A COMMUNIST PASSES FIRST AND ASKS QUESTIONS LATER PATRIOTS. <--this statement may be made in jest you never know.

The Auburn defense, however, will likely allow Mississippi State to stay in the game, since Ted "The" Roof "Is On Fire Just Like My Secondaries" combined with the quick strike nature of the Malzahn offense means you will get your possessions and then be able to take advantage of them. Even poor Arkansas State amassed 22 first downs on them, meaning those chains can and will be moved, and the linesmen will likely skip P90x tonight due to the exertion of sprinting up and down the sidelines.

As usual for any Auburn defense ever, watch your head around the defensive line, because they will try to remove it for a festive game of sepak takraw, particularly Antoine Carter and the 2.5 sacks he picked up last week. Daren Bates is also fiendishly active in the secondary.

Mississippi State's data is equally dodgy thanks to a now-meaningless matchup with Memphis, who is not so much in the rebuilding phase as they are in the demolition and wreckage-clearing stage of their program's lifespan after Tommy West's best resignation speech ever. Starting qb Chris Relf, when on the field, will play the part of Mothra to Newton's Godzilla, going heavy Tebow Smash style up the middle, zone read, and speed option with running back Vick Ballard. Note: when on the field, since back up Tyler Russell is a much more accomplished passer than starter Relf and threw for four TDs versus Memphis last week. It's not a qb controversy if the contraption works, and thus far in one game the Rube Goldberg machine of Miss State's offense seems to be working well enough.

(True story: to start Chris Relf on an option, you roll a marble through a tube that drops into a bucket, which then drops onto a lever, which then turns on a green light reading GO on the playboard held up by Bulldog coaches. If the game goes into an eight tiebreaker, Relf and Newton will decide the game Kaiju Big Battel style in the middle of the field in a miniature model of Tokyo.)

The defense was statistically untested by Memphis, and thus literally cannot be evaluated because Memphis is really, really that bad despite having a quarterback named "Cannon Smith."

Advantage: Auburn. Only by virtue of Arkansas State being a slightly better litmus test than Memphis.

Category Two: Mascot: A pair of derivatives here, or at least one derivative and one nominal hybrid in the form of Auburn's Tiger, who while the official mascot always drags along the entourage of the War Eagle and the Plainsmen. When he becomes famous and loses his money, they'll desert him in the house that the bank will inevitably repossess, and forget him by latching onto another unbroke, un-meth-addicted mascot. And the Tiger will cry, and it will be accompanied by poignant piano music. 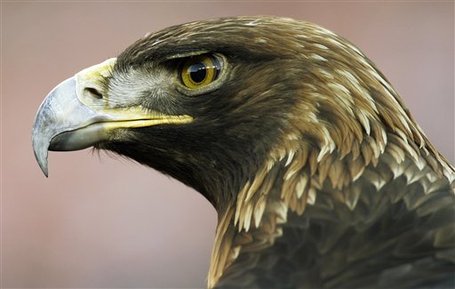 "See even AP photo knows our mascot is the tiger and DAMMIT---" You have a branding problem and it is all your fault, Tigereagleplainsmenbattlebotadores. We don't know what that last part is, but it makes it sound more sci-fi and more Spanish, and therefore it stands. 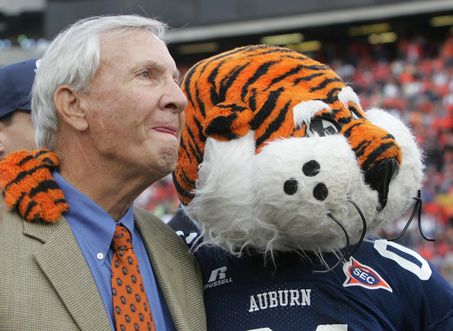 BTW, Pat Dye always sees him next to him even when he's not there. When he drives, the Tiger is like an invisible GPS reading out directions to him. Not good directions, of course, and often nonsensical ones like "Turn through hedge" and "attempt to high five mailbox after right turn." They usually end up at a Jo-Ann's Fabrics, where Dye inevitably buys one pair of pinking shears in exchange for accurate directions back to the nearest highway.

Meanwhile, Mississippi State has a live bulldog and a costumed anthropomorphic bulldog. Think of him as the proletarian UGA. He's not as glamorous, and no, he may not have the aristocratic coloring or fancy doghouse, but he's got this steady HVAC business and a boat for the weekends. AND HA HA HE CAN BREATHE WITHOUT CHOKING AND ISN'T SO INBRED HIS HEART WILL EXPLODE AT ANY SECOND SO SUCK IT BULLDOG SNOBS. Ain't my fault if your fancy breedin' made you all deformed, rich boy.

Advantage: Mississippi State. It's a matter of simplicity, really.

Category Three: Aura. Let us visit the rules of acceptable cowbell use: Mississippi State fans may use the cowbell before the game, during timeouts and halftime, and after scores. Any use during other times could result in an initial fine of $5,000, then a $25,000 fine for a second violation, and then $50,000 for an additional infraction in a third game. Dan Mullen makes $1.2 million this season, and there are seven home games for a maximum of $280K in fines to be potentially paid.

Want a bargaining chip, Coach Mullen? Pay every one of them, annoy the hot hell out of every team that rolls into Starkville, and demand a renegotiation and reimbursement the following year or you head to greener pastures. (Which you're going to do anyway, but dammit, the cowbells are Starkville, which honestly doesn't have much else going for it besides the brainpan-rattling clatter of the bovine neckwear.)

Advantage: Auburn, but just barely here, since D.J. Looney and Ferlando Bohanna both sound like the worst roadside fuck-motel sign-in pseudonyms ever. Eltoro Freeman is really two names and almost like cheating all by itself, but we don't want to shy away from acknowledging the majesty of Baker Swedenburg, who was a fullback for Johnny "Jew-legs" Robinstone on that legendary Cornell team of 1922.*

Category Five: Grudges? Scores to settle? Sheer cussedness? Grudges and scores, yes, but little in the way of cussedness since Mississippi State has exactly one win in this series in the past decade. (19-14 in 2007. Nineteen points indicates ugliness and offensive dysfunction? Oh, you bet your ass it did.) Mississippi State was beaten 49-24 last year in this game, but was sittin at 28-17 at the half before a 14 point third quarter undid any competitive tension in the game. This should be closer in Mullen 2.0 in Starkville, and home crowd and general grudginess lean toward the Bulldogs.

EDSBS FACTOR FIVE FIVE FACTOR PREVIEW SUMMARY: 3-2, Mississippi State. Thus far the Factor Five has been a negative indicator of success with an 0-1 record on the year. If patterns hold, this will point to a winner this week, and continue the long trend of the Factor Five showing no reliability whatsoever as a predictor of actual game outcomes.

Reminder: we will be liveblogging this game at 7:30 at full speed. PREPARE THYSELF.