Our new Mad Wagerer In Chief, Peter of Cleveland Frowns, kept a clean slate last week in going 3-0-2. This week he reminds you that Notre Dame is not UConn, that the butterfly effect still exists two decades after Jurassic Park, and takes the bold move of picking Jim Tressel to cover. Enjoy.

I won't come in here and crow about last week's perfect start (PROTIP: A push is a win. Always.). Liberty she pirouette and all that, of course. But I'll admit I was a little bummed that Orson called me a "degenerate gambler" no less than three (!!!) times in last week's post. It was the position of "mad wagerer" that I thought I was signing up for, which sounded great. I get mad about things, and a wager is for sure a wager. Like:

wager - n. - something risked or staked on an uncertain event; bet:

wager - v. - to risk (something) on the outcome of a contest or any uncertain event or matter; bet. - OR -  to pledge oneself to (battle) for the decision of a cause.

Like, what's not an "uncertain event"? Do you love without expecting anything in return? Of course you do. Gambling implies "losing, or squandering," and "games of chance." Wagering isn't that. Wagering is just living in a world of limited resources where you don't know everything.

South Florida +15 over Florida (1 unit) (Saturday, 12:21 ET, ESPN3): Which is to say, Florida fan, that some have more fun doing it than others, and it's really just a matter of choice. Lemons or lemonade? My appreciation for the picking arts didn't approach full bloom until Art Modell moved the Browns to Baltimore, leaving a void of meaning in my football weekends that, thankfully, I was quick to try and fill. Life after Tebow. What else is there to do? The mere prospect sent Urban Meyer into a tailspin, but he didn't really have the option of opening a sports book account. And what else could explain Mike Pouncey? "[C]onsumed by Saturday's snap fiasco, the senior has lost sleep; his erratic snaps are plastered all over TV and people are 'killing' him on Facebook." People are dying on Facebook. We should have seen this coming last week, and might have if the prospect of wagering on the Miami Redhawks wasn't generally so unthinkable.

Notre Dame -3.5 over Michigan (2 units) (Saturday, 3:35 ET, NBC): Notre Dame would have won by 36 last week if not for Michael Floyd's strange third quarter punt into Purdue's endzone on first and goal, and the Boilermakers are a team with a functioning secondary (Charlton Williams 6'2, 206!). It's hard to understand why such a consensus (86% at one respected online book) is backing Michigan on the road here. Except that since he led the Wolverines to a win over a plodding UConn unit with no secondary (or receivers*) itself, Denard Robinson is now Cheetah-Rhino-Dragon-Emporer of the Internet. Whatever. Tie your shoes, dummy. You're going to get hurt. Also, Brian Kelly will have recruits on the sideline for this one. Nobody doesn't want to cover the spread for the recruits.

(*Note: These receivers that UConn doesn't have still reportedly managed to "burn" UConn's secondary "early and often" in the Huskies' spring game. Hey, let's make Denard Robinson** Cheetah-Rhino-Dragon-Emporer of the Internet after beating these guys....DERRRP.)

Florida State +7.5 over Oklahoma (1 unit) (Saturday, 3:35 ET, ABC): What's the point of even having a Central Time Zone if you're not going to use it to start this goddam thing at 4:35 ET? Anyway, taking the points here might seem too easy after what Utah State did to the Sooners last week, but Oklahoma's home win-streak isn't going to be undervalued here either. If you like Christian Ponder, an early game like this is probably the time to buy in. But most importantly here, don't we have to think that Mark Stoops knows things about Bob? Big game for Mark. Big game for Jimbo. In with the new is what I always say. 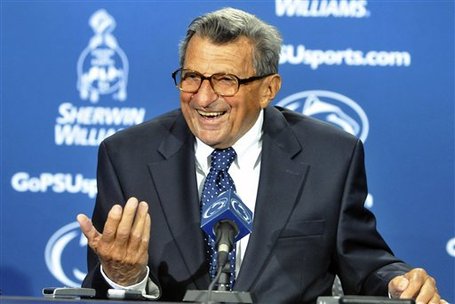 Penn State +12 over Alabama (1 unit) (Saturday, 7:05 ET, ESPN): A freshman quarterback on the road at Bryant-Denny against the defending national champs in his second-career start. Nobody doesn't get that. Nobody doesn't know that Penn State didn't play Youngstown State last week, either. Bought and paid for in the 12-point line.

It's really hard for the college kids to repeat, isn't it? How much harder when they lose guys like Marcell Dareus and Mark Ingram ("vastly underrated in terms of instincts and ability to find creases") for games like this? If you want to buy in on the meaninglessness of preseason polls, this seems like as good a place as any. Whatever they don't have, the Nittany Lions have size on the lines and speed on the outside. Hell, a butterfly flaps its wings, a ball bounces here or there, and Robert Bolden might take over next week as Flying-Cheetah-Rhino-Megatron-Boss-of-All-Things. More likely, Alabama wins by 11.

Ohio State -8 over Miami (2 units) (Saturday, 3:45 ET, ESPN): It was the most sent story on ESPN.com this week: "Revenge." "Respect." "A chance to prove that Miami really, truly is back." Revenge. For losing a national championship to a two-touchdown underdog. For being on the wrong side of one of "the best calls in officiating history" (Thanks to Doc Saturday for some excellent work on the subject). "Really, truly is back" is the best here, though, because when were the Canes even almost back? When they opened last season by beating posers from Georgia Tech, Oklahoma and Florida State (and barely)?

Smoke, mirrors, projected from ancient past. Hey, it was a great documentary. For more recent history, here's a good line about last week's Miami game against Florida A&M (emphasis supplied): "[T]here were times when mobile Rattlers quarterback Martin Ukpai was able to scramble from pressure as the Canes missed open-field tackles." Randy Shannon, Jacory Harris, how about winning a big game? Even just one?

If you realize this is Jim Tressel's best football team since '03, you have to take the Buckeyes here.

That's all for this week. Georgia/South Carolina was the one that got away. Please do share your angles in the comments here. Also, enjoy, steer clear of mobile Rattlers quarterbacks and whatnot.