Program reminder: we will be liveblogging this game tonight, even if it does turn to be out as boring as last year's sleepy Oregon/Boise affair. LeGarrette Blount didn't punch out Byron Hout: he knocked out the memory of a mediocre game, baby.

Welcome to the inaugural Factor Five Five Factor Preview for 2010, which usually precedes the Thursday night game, but there were a zillion games on Thursday night and just one worthy of the Factor Five's cold, clinical stare on Monday night. Thus the appearance this week on Monday.

The teams involved in our extremely logical study of the night's matchup are Boise State and Virginia Tech, a rivalry as old as time itself if you believe time as a variable in understanding the physical world might not exist. The two teams have never played before, and will commemorate the beginning of their affair by consummating it in a drab, anonymous corporate hotel on Raljon Road in Maryland. Daniel Snyder will send you an invoice for watching the game for $335. We suggest you ignore it until the third notice, and then mail him an envelope filled with coffee grounds and live fruit flies as payment.

The data set for 2010's five day old season for both teams is zero, so we must rely on the the last scraps of well-picked over statistical scrapple remaining from eight months of analysis.

Remember that Tyrod Taylor was a more efficient quarterback than Colt McCoy last year, and now has both halves of the Evans-Williams backfield of infinite intoxication on pure excellence behind him. (Darren Evans and Ryan Williams, both 1,000 yard rushers, and now both with intact, fully functioning ACLs now that Evans has healed up.) Remember that seven starters from the defensive team that beat Tennessee senseless in the Chick-Fil-A Bowl in 2009 are gone. Please recall that Virginia Tech in season openers over the past decade has been completely rand-o, alternating delicious cupcakey wins over Arkansas State and pre-competent UConn with losses to USC, Alabama, and the embarrassing loss two years ago to ECU. Remember that trends are here to be broken, and that you'd be a fool not to bet on them unless they don't exist. (And in VT's case in openers, they don't.)

Boise's statistical picture is even murkier. Call belief in them a matter of faith: if you believe beating TCU in last year's Fiesta Bowl with much of the same crew matters, then the 1.5 point edge many bookies have given them in this game is science, not faith. If not, then we're still relying on the old narrative that Boise continues to be the local WAC bully who has made their giant-killer reputation beating up on teams from Oregon since 2006, and that they remain an undermanned team with superb coaching waiting to be outclassed on the field. This feels like stale analytical loaf to us, but then again so does ranking them first because you want to buy a lottery ticket on their potential greatness. We're all gambling, but some of us will openly admit it without shame.

Kellen Moore threw 39 TDs to 3 INTs last year. Counting on him to turn the ball over tonight would not be a likely variable in any simulations you run in your head. The efficiency of the Boise offense versus the n00b-ish VT defense get a slight nod here, especially when you factor in VT's inconsistent play in season openers against actual competition recently.

Category Two: Mascot: The Boise State Bronco stares at the future with cobalt blue eyes and a Kennedy-esque grin photographers would drool over, boldly pointing our nation towards lunar greatness with a pointed hoof extended to the heavens. He might also have a speed addiction, Addison's disease, and a chronic weakness for blondes in evening dresses, but don't we all, partner. 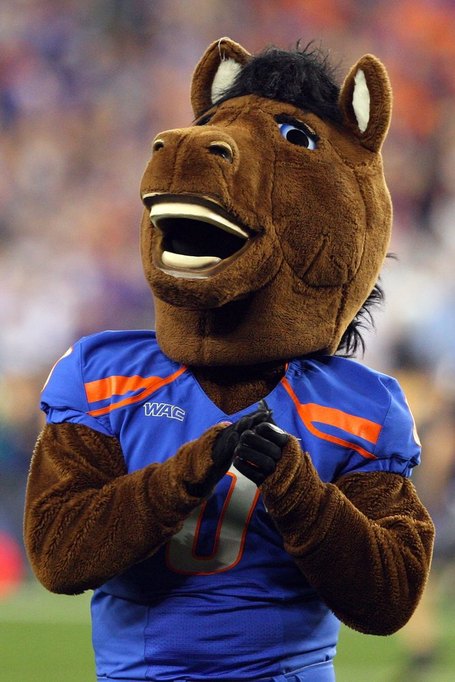 "In ten years, we will succeed in putting a WAC team on the moon, mostly because that's where they're going to have to go to find new members after Montana State Chiropractic turns their membership offer down."

On the flip side, the Virginia Tech mascot has a PED problem he likes to combine with inappropriate gymtime erections,  never seems to work out his legs enough, and is a voyeur who abuses his powers to spy on women without their knowledge. 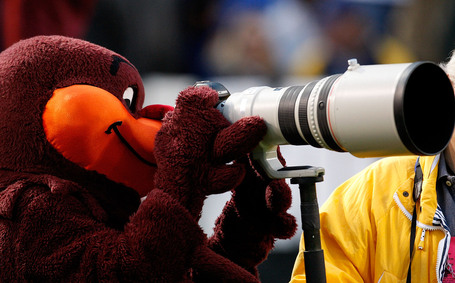 We would call it a push, but the energy of the Hokie Bird puts him over the top, especially since it's such environmentally responsible energy creation going on here. 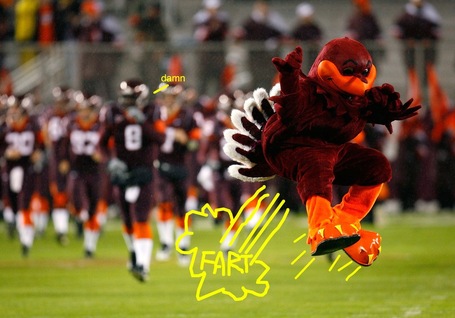 Crafty engineers never stop innovating, and thus the Hokie gets the nod.

Advantage: Virginia Tech. We got paid to make an MS Paint graphic of a farting turkey flying into the air. HATE US NOW.

Category Three: Aura. There is none, since like every other decent game this opening weekend this remains a neutral site event constructed strictly for television. Thus the actual space the game will be played in will be the history-free zone of FedEx Field, named for the 17th Governor of Virginia Claricious FedEx, who was like all other pre-1950 Governors of that state: a vicious racist one-eared donkey who wore a monocle, dented top hat, and issued his decrees by stamping his feet in a special code reserved for the governor and his staff. There is no aura in all but a handful of NFL stadiums, and this is no exception.

The VT fans will put down their whiskey IVs for a respectful moment to bob up and down to "Enter Sandman," though per the NFL's orders to make the game as even and uninteresting as possible at every turn the Smooth, Edgeless Version of the song will be used.

Upon hearing it, all fans will be charged a special listening fee by Redskins officials. One will be knocked unconscious when they attempt to take Bud Foster's lunchbox citing the stadium's ban on outside concessions. This will be the most justified ass-beating in the history of ass-beatings everywhere.

Advantage: Virginia Tech, but only because they allowed us another excuse to post the smoothest Metallica song ever.

Advantage: Virginia Tech. Not even close, and it usually isn't when the Hokies are involved, since names like "Vinston Painter" didn't even make the cut of the starting five. Germond Oatneal might be the fakest name ever, combining an obviously bogus first name with a surname that could share the title of the failed synthetic oatmeal substitute of the 22nd century. "OATNEAL: NOW MADE WITH REAL RECYCLED OLD PEOPLE."

Ricky Tjong-A-Tjoe is clearly carrying Boise here all by himself, and efforts like that usually lose.

Category Five: Grudges? Scores to settle? Sheer cussedness? All leaning Boise State's way here due to the easy pavement they can lay towards a national title shot after VT and the upcoming matchup against Oregon State at home on the Smurf Turf. (If you hate the notion of TCU or Boise State as a BCS buster, you have only Oregon State to blame. They play both, and have already lost to TCU. When they win the Pac-10 and really throw college football into chaos, you can direct farting gestures in their direction.)

VT, on the other hand, has nothing to fear but the fear of being Boise's biggest scalp since Oklahoma in 2006. Unfortunately for them and FDR's rhetorical device, fear is really, really fucking scary.

EDSBS FACTOR FIVE FIVE FACTOR PREVIEW SUMMARY: 3-2, VIRGINIA TECH. Wager carefully, since the Factor Five has been no predictor of future success in either the positive or the negative consistently. That said, it's pretty safe to bet the mortgage on the Hokies because this thing is never wrong. <---THE RETURN OF THE UNDEPENDABLE NARRATOR IS NOTED HERE.