Share All sharing options for: SCREW YOU, CAPTAIN OBVIOUS

The race for most annoying person on the planet is an intense one, but for the ADD-afflicted and other mental gearmashers no one, and we mean not one person in this entire spinning nickel-centered marvelous crapheap of a planet is more annoying than Captain Obvious. 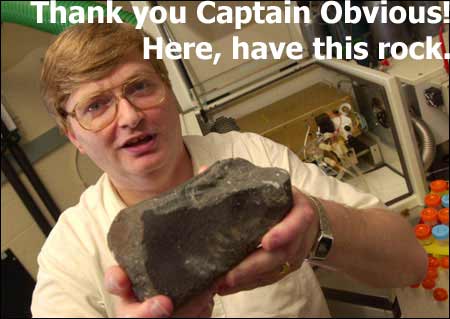 Captain Obvious's 2010 talking points are clear, but this may be our favorite one. Favorite here is defined as "the one that most makes us want to jab an icepick into our ear to go out like Trotsky in Mexico."

We would rather have lunch with Captain Obvious's cousin, Dr. Obviously Inflammatory Statement, than spend two seconds with Captain Obvious, and no more so than when the basic pattern of "Hey, that good guy is going to get injured, and then [DOOMBOTS CREEPING THE HORIZON.]" Football is a violent sport, and any star player stands a chance of getting hurt, especially if he's burning through cleats weekly like Robinson is doing. When that person leaves the team loses some talent, and it is generally replaced by inferior talent. Final step: DURRRRRRRRRP.
The question applies so universally that it has no specific value. Plug it in with any player: "What if Terrelle Pryor gets hurt?" (Answer: "They'll play the next incarnation of Todd Boeckman behind him.")  "What if John Brantley gets hurt, and then where will Florida be?" (Answer: "We'll just give up on the pass game entirely and bypass those frustrating drops on four yard hitches called on 3rd and 5," that's what we'll do.) "What if Jordan Jefferson gets hurt?" Well, LSU will probably play Jarrett Lee, and then really spectacular things start happening.
Captain Obvious isn't there to help. He's there to flex nuts on you by stating the ridiculously fucking obvious and thinking it's a feat. He also pisses and calls himself the rainmaker, and not even in an ironic, R. Kelly kind of way. Fuck this guy and every sports talk radio caller ever like him.*
*Can you tell we listened to sports talk radio today? And can you tell we don't do this often enough to insulate ourselves from the stupid on the regular?