Share All sharing options for: A FUNTIME QUIZ: WEEK FIVE

And now a funtime quiz to test your knowledge of the college football season thus far. 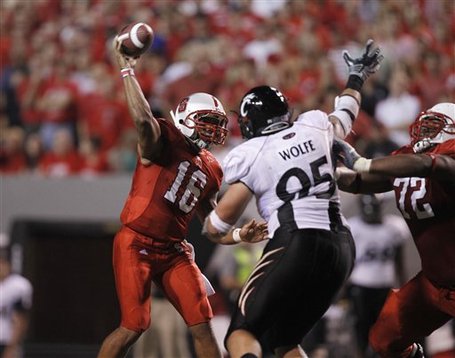 1. The current all purpose yardage leader in the ACC is:

d.) No yards have been gained in the ACC this year.

Correct answer: D. No yards have been gained in the ACC this year.

2. Greg Davis, offensive coordinator for the Texas Longhorns, is often seen looking at a screen in the booth during games. What is on this screen?

c.) Streaming and instantly reviewable video of the opponent's defense

d.) A camera trained on his exquisite home koi pond

e.) A DVD of The Iron Giant, which is why the Texas offense is so sad.

3. Rece Davis has been teamed with Craig James and Jesse Palmer for five weeks now in ESPN's new broadcasting team for Thursday night games. He:

a.) Cries softly when James and Palmer begin playing "Fart Poker" in the confined space of the booth

b.)  Is really getting worried about the "Why don't we try Adam out on air?" emails from Craig.

c.) Wants to die so hard and so badly every minute of every day.

d.) Respects Jesse Palmer confiding in him about his bulimia.

d.) CURRENTLY PULLED OVER BY ARIZONA POLICE AND FUMBLING FOR ID [MIDDLE FINGERS]

Correct answer: ALL OF THE ABOVE.

5. What has been the most impressive performance thus far this year?

a.) Marcus Lattimore vs. Georgia

b.) Terrelle Pryor vs. Miami 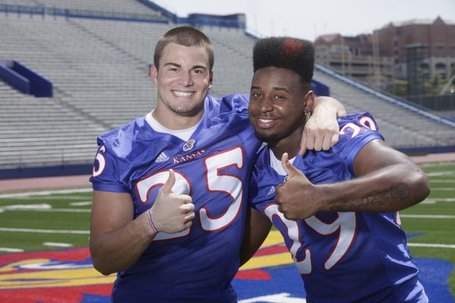 6. The next great upset on college football's schedule will be:

b.) Gary Crowton over Chinese Fingercufss [eight years and running]

c.) Illinois over Ohio State [you know [NAME REDACTED] would do just this kind of dickery]

7. BYU is 1-3 for the first time under Bronco Mendenhall. In response, the Cougars will:

a.) Re-examine their offensive depth chart

b.) Increase practice time until we get this right.

c.) Drop Two and a Half Men and its expensive syndication rights from the BYU channel, and double down on the Just the Ten of Us reruns.

8. Jacory Harris, Miami quarterback, has thrown four interceptions Is this a problem for Miami's offense?

a.) No: no omelets without a few broken eggs.

b.) Yes. Harris and his decision making must improve for Miami to contend.

c.) Whatever, homosexual. [FLASHES 'U' TO UNIVERSE AT LARGE]

d.) They're not interceptions, they're "Football Retweets."

9.  Boston College and Notre Dame resume their rivalry this weekend. You:

a.) Tune in out of morbid curiosity.

b.) Pull for Notre Dame, because they're good for college football!

c.) Pull for Boston College, because just who does Notre Dame think they are, anyway!

d.) If you're a Protestant or just don't care, nail a statement called "The 95 Feces" to the door of this game and ignore it.

10. Georgia travels to Colorado this weekend. Georgia will handle the thin air of Boulder by:

a.) using oxygen on the sideline.

b.) arriving early to acclimatize.

c.) Getting baked as hell with the locals, not giving a rat's ass about game.

Correct answer: C. and D., since they will look exactly the same on the field no matter what UGA does.