Welcome to Aggro-Tourism, EDSBS's roaming safari tour of all those foreign cultures that spring up on fall Saturdays right here in America. Now playing: The USF Bulls. 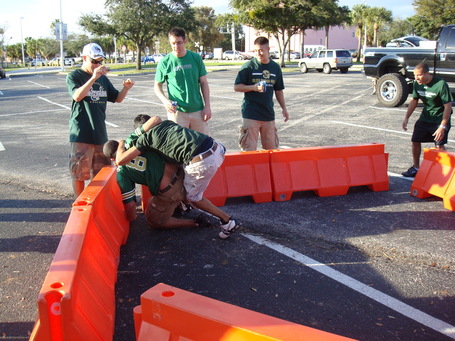 KNOW BEFORE YOU GO, MINNOW
Welcome to Tampa, gentle reader. Blistering heat, pouring rain, and strippers with multiple C-section scars are just steps away. The first reader submission we got back for this week reads, "Ponchos and sunscreen are for pussies; who needs them when your skin is so hot it turns the rain to steam on contact?" That should give you a fairly accurate idea of what you're dealing with here. USF fans, thanks to the relative youth of the program itself, are by and large young, vulgar, and drunk. This isn't a slight -- think of it like the trope about that Hot Tub Time Machine movie. Based on the title alone, you know immediately whether or not this is the sort of thing for you.

Being new money and playing in an NFL stadium ensures you won't have too much trouble parking or finding a place to set up (thanks, razed mall across the street!). The stadium's a good 15 minutes away from campus, so you won't find much in the way of old-school pregame traditions. They haven't really had time to germinate just yet. 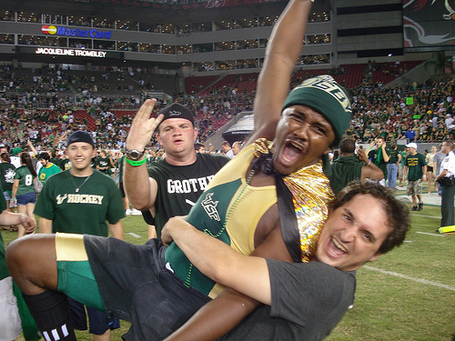 SBN's own Voodoo 5 explains how this leads to the ebullience of people like Singlet Guy:

Nearly all of our fans are older than the program itself. And since we've jumped around from I-AA to I-A and from conference to conference, we have no rivals or traditional opponents, either. Hopefully we're starting to build something up now, but of course the Big East is going to fall apart in a few years and then who knows where we end up.

Our fans understand what goes on just about everywhere else and they're really straining to create something of our own, but you can never force a tradition. It's very awkward. Going to a game still feels like an NFL experience to me, although a bit louder and with fewer TV timeouts.

Our own bubbaprog has his own theories about the driving force behind gameday behavior in Tampa:

You already know that USF is one of the handful of stadiums where beer is sold. Nearly everything about what we do is linked in some way to that. Thus, a great deal of the interesting behavior is found in the stadium rather than outside of it. USF fans celebrate impending victory by chucking water bottles half-full of Hypnotiq or, possibly, water. i've taken at least three in the back of the skull and my head is below-average size. 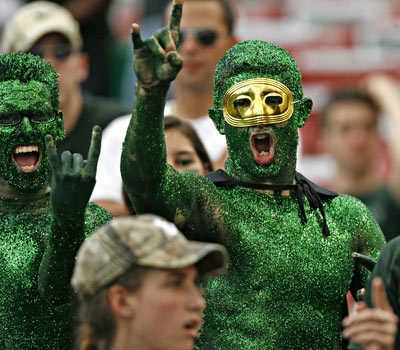 And speaking of the vitality of youth: Tampa police, county deputies, and honest-to-Sutekh plainclothes ATF agents patrol this parking lot looking for signs of trouble. Watch your ass if you're under 21.


WHEREFORE TO DRANK AND FEED YOURSELF. EDSBS denizens recommend:

Move away from campus and things get better. There are three main hot spots, depending on your speed. Ybor City has the most bars, it's still a big party spot on weekends, and it's just a tiny bit treacherous. It's like a very, very, VERY poor person's Bourbon Street. Channelside is where you go if your best drinking years are behind you and you have to get home before the sitter falls asleep. And available evidence points to the bars in Hyde Park and Howard Avenue being the place to go if you're a douchebag.

Also for anyone who just HAS to see tit-tays before leaving town, the strip clubs everyone always talks about are Mons Venus and 2001. They're about a mile south of the stadium, across the street from each other.

28 September 2008.  #5 WVU rolls into town for the Friday night ESPN game. It's the first time since the first game the program existed that the upper deck is open. This, too, is important, because it means the stadium staff and security was increased by a good 50% and those 50% of employees had (and continue to have, for big games) no idea what they're doing. So the policy became... and is, as far as I know, still in place... to just dump people outside the stadium rather than lock them up. 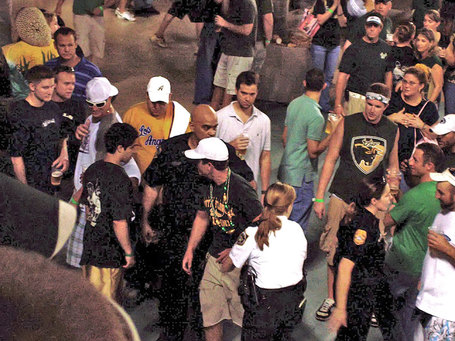 That guy is telling his friends, "don't worry, I'll be back," and he would be about ten minutes later. Lesson: if you plan to get kicked out, do so before TV timeouts and you won't miss much.

Like most places, they'll only sell two beers at once and if you already have two beers they won't sell you any. TIP: buy a soda, dump it out, pour the beer in the soda cup, buy another beer. This guy has it down. Obviously you increase your carriage rate 33% by doubling up on the soda, too.

I have never seen a horse on a football field not named Renegade or pulling a Schooner. Except at USF games when we win 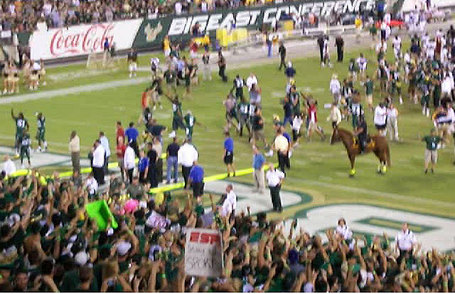 but what do i know, maybe the horse thing is normal.  -- bubbaprog

Before the '07 USF v WVU I saw a couple guys sitting on a couch at their tailgate and i remember thinking it was very odd.  After the game I walked back again and the couch was on fire and they were sitting on the ground hand cuffed and were being 'interviewed' by Tampa's finest. 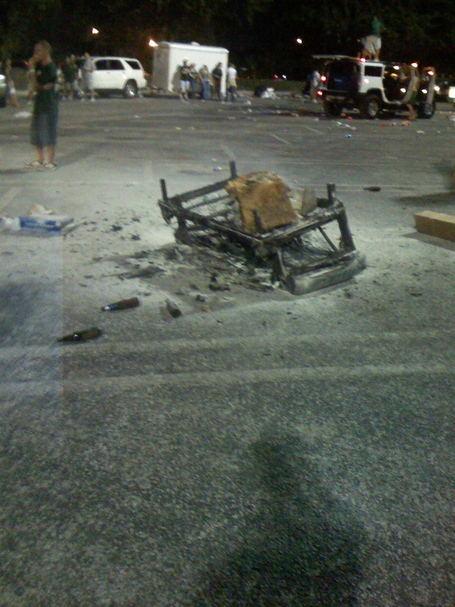 The crowd came to their defense with chants of "they're real sorry" and "they won't do it again".  The police let them go eventually and confiscated their beer.  -- Matt Warner

It's really weird how fanatic our younger fans are about having beer in their stadium, which we do because it's not on campus. Every time the Bulls take a road trip and some of them make the trip, the beer question inevitably comes up even though it's about the stupidest thing to worry about at a road game. We play at WFVU every two years, they should be worried about getting out of that place alive if USF wins, and all some of them want to ask about is beer. -- Voodoo 5

it was a cold night, maybe the Louisville game in 07? that was in november. I had an old corduroy jacket on, a green thing with elbow patches that used to belong to my dad when HE was in grad school. two undergrads end up heading to the parking lot where we finish up the beers some dudes in a pickup with a CD player set to repeat on "Separate Ways." the coeds end up back in my car where a J gets smoked and when i wake up it's 2am and i don't have my jacket anymore but there are a pair of black high heels in the back seat. -- bubbaprog

And there you have it. Thanks to: bubbaprog, Charles UF, Matt Warner, and our bros at Voodoo Five.