Resident probability technician Peter of Cleveland Frowns is a shade over .500 going into week four. Gambling, like reading, is fundamental, so work on your basics and enjoy this week's edition of Mad Wagering, and note that if/when the Pac-10 game comes to Las Vegas we will be the first ones there to "cover" the game.

It's Week Four, and it's hard to ask for a better start than the one we've gotten off to here so far: Our best foot forward with a perfect Week One slate (3-0-2), a most natural regression in Week Two (1-4), and a boldly benign Week Three (2-2-1).  Remember, the season's opening weeks are for little more than ingratiating, so we're especially glad to be here in one whole piece even after making the obligatory opening offeratories (to The Stache and Sark), and indulging both our deep-seated prejudices (just see Week Two) and wildest fantasies (e.g., the Tebow Void).

Call this the beginning of 2010's Phase Two. Fall's in the air, and we've gotten somewhere.

And much better that we've gotten somewhere together. Let me explain.

Bill Simmons used to (and might still) complain about his early deadline for his weekly NFL picks column at ESPN, and it's easy to understand why. Because nobody ever really has to make a pick until kickoff, and of course, no game, (thus, no pick) is real until kickoff, that kickoff having been(,at least potentially, significantly) influenced by everything that happened in every bit of the time that came before it.

But the silver lining that Simmons always seemed to miss here is that those things that happen in that time between column deadline and kickoff include things like the responses to the picks that are published in the comment section by EDSBS readers. Which is to say how goddam right you are that I didn't put a full unit on Washington last week (word up/major thx Jimmyb2003, AutzenGetsBlounted, Joey C., and GoBigRev); and is also to point up what a good thing it can be when a person writes about why he picks what he picks with any kind of significant consistent effort.

Like, it's really not that hard for the decent reader to see where the decent writer goes off his course when it comes to these things (aka word up/major thx Jimmyb2003, AutzenGetsBlounted, Joey C., and GoBigRev). The difference between the winning plays -- the ones supported by irrefutable underappreciated analytical authority (Texas, Week Three), underappreciated historical fact (Miami, Week Two), and irrefutably moral morality (Boise, Week One; Arizona, Week Three) -- should be easy enough to distinguish from not just the prejudice and fantasy, but especially the raw derpery (like, "Hey, Mark Stoops prolly knows things about his brother Bob, and Christian Ponder DERP 7.5 SO MANY POINTZ WTFZ!?" (Florida State, Week Two (word up Temudjin here for the warning, btw)) or "Ya, the Huskers D is really good, but Sark, and frosh QB on road, and Locker might be underrateDDDDDERRRRRRP" (Washington, Week Three))."

So, you see, we're all in this together.  Reading is fundamental. And people need people. Like I've been saying.

Just keep in mind that Phase Two is still at least somewhat about ingratiating. And also that I'm probably going to go undefeated this weekend, so don't get carried away.

Miami -4 over Pittsburgh (3 units) (Thursday, 7:50 PM ET, ESPN): Every once so rarely, a pick is really easy. No disrespect to the 'Stache (AT ALL, OBVS), but fuck the haters is the only thing that applies here.

*(Semi-relatedly: As much as I love Twitter, I'm fine with Randy Shannon's Twitter ban. Like when I was a Revere Football Minuteman ('96**), it was just one of those things that I wasn't allowed to smoke after-school blunts with Katie and Nate in Mrs. Harris's '84 Wagoneer while they drove in circles around the block laughing at us every day during practice. Sometimes you just have to make tradeoffs.)

Alabama -7 over Arkansas (2 units) (Saturday, 3:35 PM ET, CBS): Way too much Ryan Mallett this week. Especially since if a Georgia DB would have played football even halfway right for one play and made a tackle, there really wouldn't have been any of it. Instead we'd be talking about all the dents Mallett made in the Georgia turf last week under where open receivers used to be. And that was flailing ailing Georgia last week, not Saban's fucking freakbots, who have us thinking about how hard it might not be to finish undefeated in the SEC. Against the spread.

Orson's great and all, and it's fine for him to write really nicely about how he wants there to be another great quarterback from the SEC (LIKE RITE NOWZ), but if Mallett's ever won one big game (questionable), he's for sure never won two big games in a row. Dan McGwire was 6'7" too. 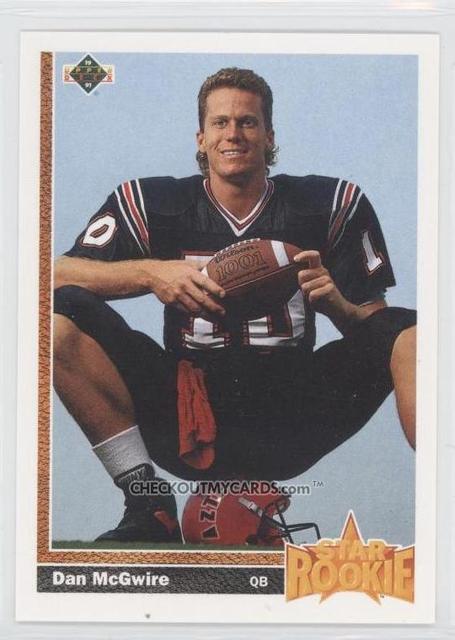 Hair. Notice it. Thank you.

Finally, either semi-relatedly or probably most importantly, ESPN's resident wiseguy Chad Millman is telling us Arkansas is the play of the week because he knows some jerk who:

[L]ikes to go against teams in the second game of back-to-back road games when they have scored 50 or more in the previous game, are matched up against an opponent who did not score 50 and when the road team is not favored by more than 14 points.

Might as well crawl back into the muck and die instead of wagering on a football game for a reason like that.

Especially when there's this:

Andrew Luck's a different story. Number-one-pickworthy QBs from Stanford who have coaches for dads and otherwise just stink of football really do scare the fuck out of me. (He even has sort of an Elway face.)

But Luck and Stanford's offense can't be what's undervalued here (I see you, Dr. Sat.). At least not as much as Brian Kelly having gone Lloyd Bentzen on Coach Jim early this week. "I know Jack Harbaugh, son."

What Kelly was probably getting at is that there's not a huge difference between what Stanford Football's slogan is ("What's your deal?") and what it probably should be ("We're kind of a bunch of dicks."). Plus, he's had a pretty strange go of it in his first three weeks as Irish coach what with the push in Purdue after Michael Floyd's weird punt, getting DERP Montana'd in Michigan after Dayne Crist's eyeballs got knocked loose, then having to go up to Sparta for even more weirdness after all that.

I like the potential that Notre Dame gets back to some normal this week at home coming off all that underrated weirdness against a potentially overbought Stanford attack. (It helps that Notre Dame's secondary is getting healthier while Stanford's receiving corps is moving in the opposite direction, too.)

Auburn --3 over South Carolina (3 units) (Saturday, 7:50 PM ET, ESPN): This one looks like it's going to be the game of the week. Like Iowa/Arizona last week, the toughest and most necessary pick on this week's slate.  Think about it:

The first meaningful road game for the most hyped Sakerlina unit of the Spurrier Era. There's Auburn's brutal pass rush against Sakerlina's battered offensive line. And they say SEC home field is worth 5.5 points.  But Carolina QB StephenGarcia is a junior now, with a running game behind him, and long fast receivers in front of him (this week against Auburn's smallish defensive backs).

And Auburn's offensive line might be in worse shape than the Cocks,' with one starting tackle (A.J. Greene) out, and another (Lee Zeimba) with a banged-up knee that reportedly "clearly" limited him last week." Worse for the Tigers that this exposes them to a Gamecock's strength in ends Devin Taylor and Cliff Matthews who should be able to limit inexperienced Auburn QB Cam Newton's seemingly necessary ability to move outside of the pocket.

In a way, it's too bad that it was only just last week that Auburn and Clemson played such a "game for grown men" (the only kind of game Cocaine Tiger plays, duh) while Sakerlina was pawing at Furman, but there has to be an upside for the Tigers in having survived that sort of thing too. What tips the scales for us here is the way they managed to do it. An entire first half of three-and-outs on offense plugged into Gus Malzahn at halftime for second half KILL. If life was like the movies and Cybertide was the Tin Man, it would shed a tear for this.*

Boise State -17.5 over Oregon State (3 units) (Saturday, 8:05 PM ET, ABC): What a world for the Boise State Broncos, to get that Week One win only to have the vast right wing conspiracy so flagrantly cut them down the very next week. What's good about this for us and whoever else is Up with People is that there's only one natural response to this kind of treatment (and, relatedly, to flagrant violations of sound environmental policy), which is just KEEP COVERING BY ELEVENTY BILLION POINTS.

Plus, if Stanzi is President (he is*), Kellen Moore is VP.

*It takes a Maoist youth rally on Mars to even temporarily neutralize Stanzi's powers. Which is totally fair if someone can manage to organize the sort of thing.

That's all for this week. If I was going to pick one more it would be West Virginia at LSU, which I might add to the slate later this week at Cleveland Frowns. Note that I'm 3-0 with picks that I've added to the slate later in the week this season, and again that your feedback on this week's action is not only appreciated but necessary.