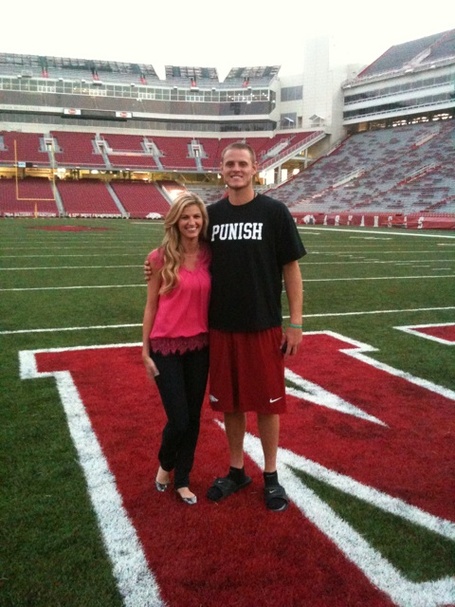 When exactly does the process of highly specific regional deification begin? Mallett didn't have far to go to surpass his Arkansas forebears: he already holds the single season passing record for the Hawgs, and could in theory surpass Clint Stoerner's four year career total in just two years. (He has to average 300 yards a game to do it, but this being a crackified year in the SEC West, anything can happen including this.) The TD total, if he stays on pace for last year's production, will also assuredly be his.

Records are delightful trophies to keep on the shelf, but only Jason Stackhouse and ancient baseball statisticians truly care about them. What Arkansas fans should care about most is that Summer of Mallett is perhaps the first genuinely badass quarterback to line up under center for the Razorbacks in the modern era, a missile-hurling deathapult with an opportunity this weekend to singlehandedly take down the best football team in America for the past year and a half, the Alabama Crimson Tide. (Full name used for gravitational rhetorical purposes.) He isn't Matt Jones, who more often than not seemed to be in the midst of an elaborate guess at what to do when his body took over and functioned on instinct. He is certainly not Casey Dick or Mitch Mustain or even Clint Stoerner, whose workmanlike excellence was undone in a single horrific moment in Knoxville. If you started bleeding from all your orifices at once at the very mention of that, we're sorry. You don't get to hear all nice things about the cursed lineage of your quarterbacks with discussing the snakebitten part.

He is something that, even when Bobby Petrino finds the next living avatar of his offensive genius, will stand as being unique: a gigantic, outsized savant-Sasquatch of a quarterback with an arm capable of passing exceeding the word passing. Ballistics might be a better term, particularly when he begins lobbing balls down the test range a piece. We don't really get superb quarterbacks in the SEC very often. Alabama prefers game managers, Florida has a habit of winning with The Best High School Quarterback Whose Talents Peak At 20. With the exceptions of Craig and Newton, Auburn has played the same middle aged man at quarterback for the past twenty years under different names. South Carolina, for the most part, has played pieces of furniture in jerseys.

The last three quarterbacks we can think of who had the most Platonic ideal coming off of them coming out of college were Matthew Stafford, Jay Cutler, and Eli Manning. That's big company, but he's already in a category all by himself at Arkansas, so he should be used to it. If he does lose to Alabama this weekend that shine could be slightly dulled, but he'll have the consolation of good company in that sense. Alabama's regular season win streak stands at 27, and the large number of fellow victims of the Tahde will be some comfort. If he's remembered for near misses, let him be remembered as an occasionally spectacular and very important factor in those near-misses. And if not, and he pulls off the upset in Fayetteville, give him the richly deserved credit he will deserve.

(A Babylonian Kingdom of a pro contract will dull the sting, too, but just saying: in losing he wouldn't be alone either in Arkansas football history or in the general stream of current SEC geopolitics.)

*And yes, we did skip Jamarcus Russell in all that because seriously, do you really want to remember the Purple Admiral as failed potential, or as the magical giant who threw bullets through Notre Dame's secondary and then wandered like Swamp Thing into the purple mists of the bayou, never to be seen again? We thought so.)