Welcome to Aggro-Tourism, EDSBS's roaming safari tour of all those foreign cultures that spring up on fall Saturdays, right here in America. Now playing: The UCLA Bruins.

Having spent most of our time in Cullyforneeya down the street from that other L.A. school, and having seen our alma mater get bitchmade by the Bruins two years running, we are not the world's biggest Rose Bowl fans, but LOOK HOW PRETTY IT LOOKS WHEN YOU TAKE CLOSEUPS. 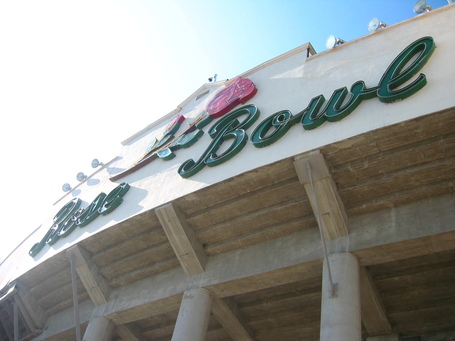 All misfortunes aside:  Tailgating at the Rose Bowl is a truly unique experience (in a good way), their cheerleaders dance like whores (this is a completely sincere compliment; they are beyond distracting even for opposing hetero female fans), and their football team is having a rrrrill rough year but that hasn't stopped them from showing up in droves to drink (AND BOY HOWDY CAN WE EVER RELATE TO THAT). Stay tuned to the end for a bonus tale of an unlikely Vawl-Bruin alliance that captivated a nation (well, a website). You are Good People, Westwood-Pasadena Axis Of Specifically-Named Bears.

UCLA correspondent Alex laments the long, twisty trip that accompanies any home weekend for the Bruins:

Though it is a gorgeous setting, anybody over 5'10 has discomfort in the seats, and it is that special kind of stadium that can make a 60,000 person crowd (about the average UCLA crowd over the past dark decade) look tiny.   The inevitable offseason whispers of building an on-campus stadium are immediately shot down by the rich people living in Beverly Hills and Bel Air, who cannot abide seven weekend days a year of people enjoying themselves, and so Bruin fans on campus must take a trip  before reaching Pasadena.

UCLA fans are schooled a good 25 miles from where their team plays home games, which in Los Angeles may as well be 250. Crawling down the 405 to the 101 to the 134 to the 210 to reach the Rose Bowl will make you long for hauling ass straight up a hill in stilettos in Knox- or Fayetteville. The Coliseum is actually physically closer to UCLA than their own stadium. And don't think it doesn't get hot, even in perfect Pasadena. We were dealt the worst sunburn of our natural lives there in 2008 for thinking otherwise, from which we still have visible scarring.

Do not drive to the Rose Bowl.  If you are of the young of heart, find a student connection and hitch a ride on one of the dozens of chartered buses that make the trip from Westwood to Pasadena on Saturdays.  If you have to be stuck on the 110 North for 90 minutes while you stare out longingly towards the smog-shadowed skyline, you might as well be with thirty other people, a keg, and a flask.  If you insist on driving to Pasadena, and you don't have a tailgate group, park at Parsons Engineering and save yourself some cash and the headache of the Rose Bowl parking lot.

Get there earlier than you'd think, even for hard-bitten tailgating veterans: space is not at a premium, but the roads and lot entrances surrounding the stadium slow to a level of creep that can only be described as migraine magnetism by two hours before kickoff.  If you can't get into Parsons, park towards the southern end of the lots so that you can watch both teams's bands unload and march the length of the lot to the Rose Bowl.

At the Rose Bowl, the tailgating centers on both Lot H, a huge grass field to the southeast of the stadium, and the golf course, to the north.  Lot H is much more condensed, with all the official tailgates, while the golf course offers more space to move around and set up pickup games.

Once you get there, prepare to hunker down for the duration. There is no way in hell you're moving your car back out until nightfall. This is not an experience for the short-timer. We know several UCLA alums who came to Knoxville and were shocked to see tailgaters in parking garages -- here it's all green (well, brown if you catch it at the wrong time of year) and there's more than enough room for everybody if you don't mind a hike and a half. We have seen actual SC fans with our own eyes setting up shop here for the duration with a television in the back of a Navigator, preferring to watch the game from the golf course than deal with downtown. Really, it's quite lovely.

Alex directs us to the good stuff:

[UCLA is for you] if you like Mexican food and hot women.  The last great pregame experience in the city now that the broke bastard who owns the dodgers banned tailgating at dodger stadium.

(Tip for out-of-towners: the best marinated meat in Los Angeles can be bought at ethnic supermarkets everywhere, but especially the Latino supermarket chain Vallarta.  Head in there and ask for marinated carne asada and you're set.)

SPECIAL NOTE FOR CROSS-COUNTRY VISITORS from additional anonymous Bruin: "Eurotrash music prevails, which can scare southerners and we fear may drive Houstonians to physical violence, so heads on a swivel."

WHERE FOR TO DRANK AND FEED YOURSELVES.
Freddy's 35er for cheap beer, Pie N Burger for long-ass waits and delicious-ass eponymous treats, Diddy Riese in Westwood for snackies.

The RB doesn't allow you to bring in outside alcohol, which caused at least 5 Bama fans (who I could see) to chug a handle each of Jack in under a minute as they were entering the stadium.  Truly glorious.  --Alex

2005.  I'm three months from my 21st birthday and down in LA to watch Cal choke away its annual trip to Southern California.  Against my own advice, I drive from Westwood to Pasadena, park somewhere closer to Palmdale than Pasadena, and walk aimlessly around the parking lot looking for my friends' tailgate.  50 minutes before kickoff, stone sober, I found the group.  Like any good football fan, I shotgun six beers and stumble towards the stadium.  I inevitably attract the attention of two LAPD officers who start walking towards me.  Fearing the taser (a joke that was still funny in 2005), I slowly shuffle backwards, straight into one of my blacked-out fraternity brothers, who drunkenly falls into a rare group of UCLA meatheads.  The three locals take offense and go to blows with the friend, LAPD rushes in to break it up, and the cops somehow figure that only the three UCLA kids and my fraternity brother need to be carded and shipped off to the Rose Bowl drunk tank.  Once again, proving the old maxim - you don't have to be sober to escape the cops, you just have to be more sober than the guy next to you.

FWIW, the blacked out friend said he had more fun listening to the game on the radio in a jail cell with 25 other poor bastards than he had the rest of the season.  -- (anonymous bruin)


BONUS ALLIANCE TALE: BN reader MexiBruin reminded us of his adventure with the Tennessee home-and-home, a tale of true fandom and hospitality on two coasts.