TENNESSEE WEEK: REMEMBER WHY YOU SHOULD CARE VIA CASEY CLAUSEN

Share All sharing options for: TENNESSEE WEEK: REMEMBER WHY YOU SHOULD CARE VIA CASEY CLAUSEN

Tennessee Hate Week has been subdued and delayed. That is our fault, so let's cure that right now. 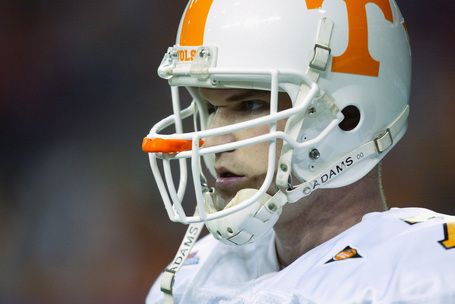 Tennessee's status as a rival has, to put it gently, declined in the eyes of Florida fans. We're not alone: with the exception of Georgia and their perennial whipping boy Kentucky, the Tennessee game has lost its lustre across the board thanks to program mismanagement, an upsurge of competitors encroaching on Tennessee's already small recruiting footprint, and the wrath of an arbitrarily angry God pointing in the correct direction for once. Big ups, angry random deity!

Angry random deity: RESPECT TO THE SAMOANS AND WORD TO YOU, ORSON.

The athletic department in general is a wreck now thanks to their men's basketball coach admitting that he lied to the NCAA. It was Bruce Pearl doing the lying, so you know it was a well-told, charismatic lie ending with an increased admiration for Pearl, some backslapping, and possibly some energetic light whoring. It was fun, but it is sadly runs counter to the interests of the University of Tennessee and cost Pearl $3 million and possibly much more down the road. Pat Summitt is standing around wondering when any of you are going to grow a cock bigger than hers and act like men.

Derek Dooley is likely a step in the right direction for many reasons. He recruits, something his penultimate predecessor did not do in the last three or four years of his program. He is not a dick, unlike his predecessor, and will not pile any loaner cars into lakes late at night under suspicious conditions. He has his team practicing good shower discipline after forcing them to watch him take a proper shower nude in front of their horrified eyes.

The Tennessee team alternates throwing up and laughing until they throw up at this speech.

Dooley's a hands-on guy, and will probably get the program into a respectable spot in the SEC East before being fired for only winning eight games one year. Then Mike Hamilton will reach into his bag of HR magic, root around for three seconds or so, and hire Les Miles. This will trigger a series of dignified, General Neyland-approved suicides across East Tennessee, and no one will blame any of you for a damn second for it.

There are things to still despise about this football program, though, but mostly Casey Clausen, college quarterback.

Multiple quarterback families are just like any other clans who, most likely under the influence of a deranged father and terrified mother, decide to void the hopes and dreams of their children into a warped vision of their own frustrated ambitions.* The Forcier family and their three transfer-happy progeny are one example, but our favorite remains the Clausen Tribe of Thousand Oaks, California.

Casey is the oldest of the Clausen brothers raised from birth by their demented father to, in his words, "Play football well, but not well enough to last so long in the NFL you get injured by other players or the iniquities of wealth." Jimmy may be the lightning rod for wearing nugget rings and a Pauly D fleshmask to his Notre Dame commitment announcement at the College Football Hall of Fame, but Casey was Left Coast Guido Chic before it was even antifashionable to be Left Coast Guido Chic.

Casey was named "Casey." He wore his hair in a rooster spike, and had the physique of Peyton Manning if Manning had never squatted a day in his life, and had in fact suffered a wasting disease of the legs in childhood. (Something like Polio Lite, for instance.) He threw passes with the consistency of a young Jimmy Clausen, or an old Steve Deberg, or perhaps even a seasoned J.P. Losman in his slapdick NFL prime. Maybe we were dreaming and he was all three, a kind of scatterarmed Cerebrus with gel in his hair and a predilection for getting shot down by UT coeds.* Maybe we were dreaming about the time he threw a jump ball into the endzone at the half against Florida in the Swamp and James Banks came down in the endzone with it thanks to [NAME REDACTED]'s horrific clock management. Maybe that would explain the blood on the walls, and that dead, mutilated groundhog in the corner.

He was like Chris Rix, but taller, paler, more successful overall, and without the habit of parking his Corvette in handicapped parking spaces. Like Rix, his dismal attempts at self-promotion only made things worse. He nicknamed himself "Iceman" despite playing on a team living off the run game and solid defense. He is on the Wes Byrum Death List for chomping in the Swamp. Holly saw him slam a door on a girl's be-casted broken arm in McAlister's one night. That may be the most perfect Casey Clausen story ever, and it is completely true.

He was also like Chris Rix in that he played against Florida in the [NAME REDACTED] era. This meant that even when he played mediocre football, his opposition would behold his mediocrity, mark it with chalk on the wall, and proceed to limbo underneath that. The lone exception to this rule: the 2002 Florida/Tennessee game in Knoxville, now presented in verse form.

THE BALLAD OF THE 2002 FLORIDA/TENNESSEE GAME

One day while ambling along

The streets of ATL

Dear Father Swindle called us up

And bid us hale and well

"Three tickets to a game I have

Get thee to Knoxville with all haste!

And yours they'll surely be."

With weather fair and sunny

We hit the highway fair

With shorts and t-shirts only clad

A flask of rum, Brother Swindle had

"Too busy security will be

Looking for knives and meth,"

"To notice our but humble rum

Would be more useful still.

The rain it came, the air grew cool,

And we were ill-prepared.

Walking to the stadium,

No coke we used to drink the grog,

Straight down our throats it poured!

And Florida scored and scored.

24 points in a quarter's span

Rained on the Volunteers

Earnest Graham did punch one in,

The rest came from between Casey's ears

One snap he did fumble,

And then he did two,

A third came along

Flopping and flailing across the turf

Into hands wearing orange and blue,

The points came and continued to rain

As Rex Grossman threw and threw.

We were freezing, yes, clad only in shorts

And a t-shirt, soaked to the bone

How did one keep warm in the Tennessee rain?

When you left all your raingear at home?

The answer is simple: victory and rum

It's easy to keep warm when you're drunk as a lord

And sore at the ribs from laughing.

He was, in short, despicable and thus very much like Chris Rix in that respect. Worse yet, he overshadowed poor Rick Clausen, the one we liked for being not Casey or Jimmy, and for not being unlikeably good at playing the quarterback position. Casey Clausen now sells insurance and volunteers as a football coach for teams who want to lose a lot of games and fist-pump no matter what happens on the field, because yeah, fistpumping. You should still hate Tennessee, and his career at Tennessee is one good reason to do this.

*Don't get the Colquitts tied up in this concept. They kick their way out of the womb with one hypertrophied leg, uncanny accuracy, and a burning desire never to hit anyone on the football field as long as they live. If they are a football showbiz family, they're at least an admirably quirky one, like a family of accordionists.