Share All sharing options for: THE CFB BUYERS' GUIDE: BCS-BUSTERS

Each week, EDSBS is teaming up with the diligent product-testers at Consumers Union to put teams, coaches, players, and even mascots through their paces to determine which ones are most worthy of your hard-earned dollar. This week: Which potential BCS-busters have the strength to take a pounding and still come out on the other side in a big-money bowl, and which ones should just save themselves the trouble and start pricing plane tickets to Shreveport? 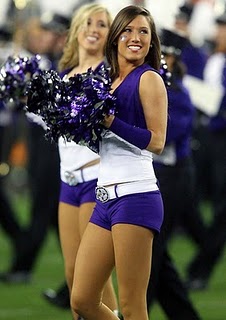 TCU HORNED FROGS | ■ ■ ■ ■ ½
Highs: Rugged defense, excellent battery life, top-notch value pick, sick pom squad.
Lows: Off-putting color schemes, good rather than great against BCS-conference teams, mascot may frighten small children.
It may not get the media hype of some of the other products in this test, but if you want an affordable, well-made BCS-buster candidate that'll grind its way through big game after big game and never leave you in the lurch, the 2010-model Horned Frogs are our top pick. We were disappointed to find out that this year's model would be without the Jerry Hughes component we'd raved about in the '09s, but fear not -- it's still got more than enough juice to reach New Orleans or Glendale and keep on chugging once it gets there. Can't say we're crazy about some of the new cases they've been using lately, but hey, maybe weird geometric patterns and bass-boat finishes are what the kids are going for these days. If you can get past that and the whole spitting-blood-from-its-eyes thing, Texas Christian will give you Saturday after Saturday of superior service. 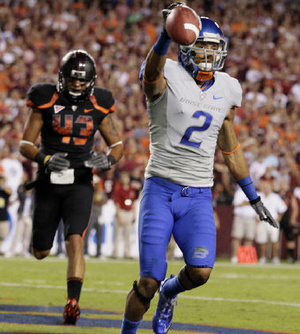 BOISE STATE BRONCOS | ■ ■ ■ ■ □
Highs: A brand name you can rely on, fewest dropped calls, can hang with anyone here on the scoreboard.Lows: Cost-cutting has led to cheaper materials, availability remains scarce in larger markets.
We're just as surprised as you are to see this segment's perennial standard-bearer falling to second place in our 2010 test. On paper, the Broncos still have all the firepower needed to get to a BCS bowl, as well as a schedule that sets up for 12-0 perhaps better than any team out there, but quite frankly, we've just gotten sick of the media hype. It's all well and good to broadcast to the world that you're better than the "leading brand," but when the leading brand turns out to be a cheap Chinese knockoff held together with Krazy Glue and baling wire, really, what do you have to hang your hat on? Assuming they can get by Oregon State next week, Boise will probably blast through its WAC slate like the Kool-Aid pitcher through an unsuspecting wall and then go on to punk a less-than-interested major-conference team in yet another Fiesta Bowl, but do not let it go unnoticed that James Madison beat VaTech by more points, in the Hokies' own house, than Boise did. If that's national-title-worthy, then screw it, I'm petitioning my alma mater to join the Sun Belt. 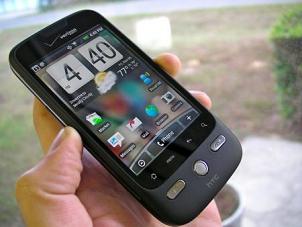 HTC DROID | ■ ■ ■ □ □Highs: Terrific user interface, class-leading camera, outstanding between the tackles.Lows: A bit undersized, can't use voice and data at the same time, may not stand up to 30-40 carries a game.Like TCU, the Droid has had to bide its time in the shadows while a flashy competitor dominates the media spotlight, but HTC's new smartphone is at least as capable of ending up in a BCS bowl as, say, Florida State, or any team coached by Tim Brewster. The HTC is easily the most user-friendly of this group, and what it lacks in size or passing prowess it more than makes up for with an 8-megapixel camera and coverage that's clear in any stadium. Unfortunately, that camera isn't necessarily going to be much help when it starts going up against the monster defensive fronts of the better BCS-conference teams: In our "torture test," where we pitted our test products against Iowa defensive end Adrian Clayborn, the HTC, in contrast to its competitors, was barely operable. (Oddly enough, it passed the "Ryan Pugh Test" with flying colors, but perhaps that's only because cell phones don't have kneecaps.) Even if the Droid does slip up once or twice this season, though, it's still got the strength of schedule to fall no further than the Las Vegas Bowl. Where we predict it'll open as a two-touchdown favorite over Arizona State. 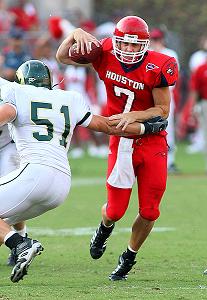 HOUSTON COUGARS | ■ ■ □ □ □
Highs: Class-leading speed, best selection of apps, ease of operation.Lows: Lightweight construction, spotty coverage, only at its best performance in off-peak hours.An outside-the-box choice in this segment? Yes, but Houston has been steadily improving and refining its product over the last four or five years, so we decided it was time to find out how it'd stack up against the more established brands. For starters, no offering in this category will rack up yards or points at the rate the Cougars will; when Case Keenum can throw for 279 yards and the rest of the country is like, "What, was he sick or something?", you know you've got a potent offense. The variety of apps on this team, too, is just staggering: Keenum has not one but three receivers who caught at least a thousand yards' worth last season, and in the unlikely event that gets bottled up, just switch your unit to "Ground" mode, where the Charles Sims and Bryce Beall functions will pick up the slack. Now, one thing you always have to worry about with these upstart brands is durability, and indeed the Keenum component on this model underwent what we've been told is a minor recall. We've also heard reports of peculiarly spotty coverage: How is it that the '09 model worked so well in Stillwater and Tulsa but was dropping calls right and left in Orlando and Greenville? If you're willing to take a chance on an upstart without a long track record but with a laundry list of features, you could do much worse, but otherwise we'd play it safe and spend the extra money on an established brand name. 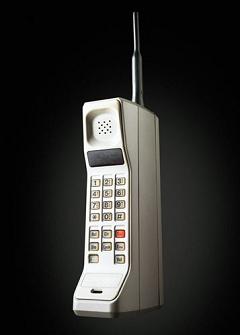 BYU COUGARS | X
Highs:Made in America with traditional American values, stout offensive line, makes a heck of a Shirley Temple.
Lows: Completely shuts down when exposed to alcohol or caffeine, utterly useless against the run.
Purists will recognize the BYU brand as having been an early innovator in the BCS-buster segment back in 1984, long before there was even a BCS to bust -- but after putting Brigham Young's 2010 model through its paces in Colorado Springs this past weekend, we kind of have to wonder if they've done anything at all to it in the ensuing 26 years. You know what you're getting when you buy anything with the BYU label: reasonably potent offense, an unusual preponderance of white players who are closer to 30 than 20. But maybe that combination doesn't quite cut it in today's competitive environment, and if a BCS bowl is what this program wants, perhaps it's time to go back to the drawing board. We've heard that this brand is going independent, perhaps to curry favor with the Arcade Fire-listening, American Apparel-wearing indie crowd, but unless skinny jeans and a sense of ironic detachment can help you keep from giving up 409 rushing yards, we're going to have to saddle the Cougars with our Not Acceptable rating.