Share All sharing options for: EDSBS'S BEST IN CLASS: WEEK 2

In which we reward the highlights and lesser luminaries of Week 2.

IMPROVING! Trent Richardson, the adorable creature who's been toiling in the tailback shadow of Mark Ingram his entire career at Alabama, and who had a nice little outing against Penn State: 144 rushing yards on 22 carries and a touchdown. That's nice, we guess. You know, if you're into having two unstoppable running backs on the same team. S'not for everybody. Whatever.

SUPERSTAR! Denard Robinson and his 502 (FIVE HUNDRED AND TWO) yards of offense against Notre Dame. We touched on this yesterday, but it bears serious examination: What are Freep investigative types going to do with their free time if Michigan keeps winning games?

YOU TRIED! Case Keenum, who sustained a concussion against UTEP and therefore came away with only 297 passing yards on 15 completions. (TRIVIA: Keenum's backup is named Cotton Turner, and by natural law could not have grown up to do anything other than quarterback in the South.)

TAKE TURNS! Kansas, determined to be everything to everyone this season. Punchline to all? Check. Bully to Josh Nesbitt's Heisman campaign? Check. For their next trick, the Jayhawks will turn a hot chick with glasses and overalls (Southern Miss) into a hot chick without either glasses or overalls, then fall in love with her.

SIT STILL! Tennessee, allowing LaMichael "The Michael" James to do this:

CREATIVE! Oklahoma State? Fumbled in victory formation and almost lost to Troy (again), all in the same evening. We have to say, we didn't see at least one of those things coming. Neither did thisbro: 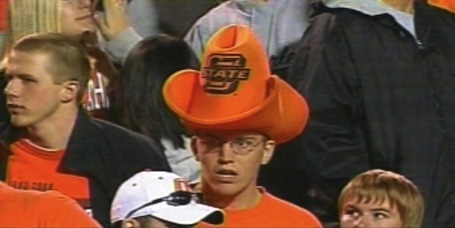 BUSY BEE! Marcus Lattimore, who ... lordamercy, a freshman with 37 carries, 182 yards, two touchdowns. The hell is this kid doing in Sakerlina? How much are we, as a division, looking forward to defending against his ass the next two or three years? VERY MUCH NOT AT ALL THANK YOU FOR ASKING.

GOOD HELPER! James Madison, clearly on the payroll of BCS interests to keep Boise State out of the title game in exchange for ACC consideration. (Which, after this weekend, the ACC could do worse than entertain.)

ADEQUATE! Our sincere congratulations to the Rutgers Scarlet Knights on their hard-fought road victory over Florida International.

GRAPE JOB! Way to go, West Virginia. Way to beat a "rival" who's never, ever bested you on the gridiron, in a primetime slot with a nation's lonely eyes tuned to you. Way to need overtime to do it. Grape. Juuuust grape.