HOW YOU LOSE 87 YARDS ON A SINGLE PLAY. When first and ten is really first and 97, or how to give the ghost of Paul Bryant a supernatural aneurysm in his otherwise pleasant afterlife of attending horse races and drinking.

FALL ON THE DAMN BALL. Not that anyone expected the game to be much more than anticlimax, but it was nothing more than anticlimax and Trent Richardson reminding the people not paying attention that he can squat 600 pounds while running with the entire Penn State defense on his back. WE KID: the defense barely touched him. Joe Pa, because he's old and can tell the truth, told the truth:

Joe Paterno doesn't want sauce with his chicken nuggets and hasn't wanted it for the 35 years he's been coming to this establishment, ma'am., and he wishes you'd quit asking.  (HT: RBR.)

IT'S TENNESSEE WEEK AND DON'T YOU FORGET IT. 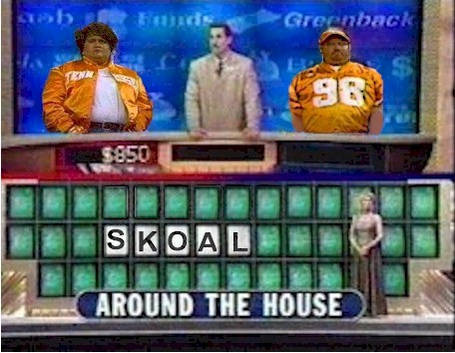 We're coming to town, Lulu and Junior. Save up for bail NOW, even if both teams look as wobbly as mountainside shithouses built on fault lines right now.

WE'RE STILL TALKING ABOUT THE NCAA AND ISN'T THAT ALWAYS FUN. AJ Green should hear about his appeal and playing status by Tuesday or so, and given the 14-6 score in the UGA game, it is safe to say Aaron Murray and the rest of the Georgia offense could use him and use him like, yesterday (or less rhetorically and more literally, two days ago.) Macon Dawg is grumbly in the wake of the Lattimore Procedure being performed on them without their permission; Garnet and Black Attack remains admirably circumspect about the quarterback situation. What we noticed most is that if you rewind the game tape, there are at least two Georgia defenders on any given play standing around and watching the play, which says to us that there's too much thinking and reading and not enough savage central nervous system reflex action going on in the new defense, which is entirely understandable. (Maddening, yes; understandable, also yes.)

OHIO SPEED. The top picture here is screamingly funny, but in an ongoing theme of the week, things remain as they always have been in college football and in Ohio, since Miami/tOSU came down to one program outmuscling another and playing good defense while the other--and this has been Miami for the past few years--lacked any kind of strength to match up against the Buckeyes. Ohio State's faster now than they've ever been, but if anything the 'Canes have some kind of iron deficiency late in games. The Seventh Floor post-mortem is here, and it's generally optimistic, and why not when the rest of your conference is a bag of dead ferrets and 70 cents in tollbooth change?

DEBATE IS DEBATABLE. Her Loyal Sons debates whether Notre Dame should have taken the points before the half against Michigan. (Yes.) (But it's Brian Kelly, and we trust him far more than we trust Charlie Weis because he'd done this job before, and because he's not a dislikable incompetent boulder of shitbaggedness.)

CASE KEENUM BRAINCASE CHECK: Iffy after Houston's victory over UTEP, thus placing Houston at UCLA in the category of "potential game" instead of "imminent slaughter."

FORGET ACKBAR THE OLE MISS PANTY BANDITS HAS A NICE RING TO IT. They do have one just running around not being useful.