Welcome to Aggro-Tourism, EDSBS's roaming safari tour of all those foreign cultures that spring up on fall Saturdays, right here in America. This week's target: The Iowa Hawkeyes, who show all ages a drunken good time. 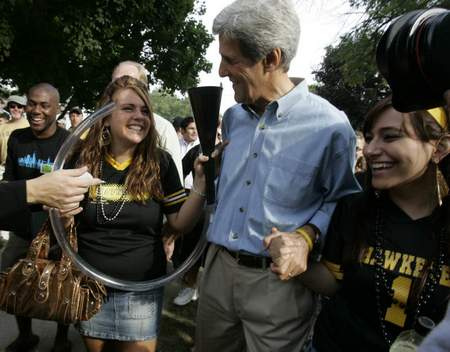 SHIT TYRONE GET IT TOGETHER.
Iowa tailgate culture, despite being infamous in certain circles for two-story beer bongs and strippers at gameday parties, is an intimate critter for such a large program. The stadium sits in a residential neighborhood; the best bet for out-of-towners looking for the quintessential Hawkeye experience (that doesn't involve being locked in a portable toilet) is to pick a friendly-looking off-campus yard to park in on the south or west side and wander from family tailgate to frat tailgate to sorority pack.

If you've never set foot in fair Iowa City, start off by strolling down Melrose Avenue along the stadium's south border. Hawkeye vodka may seem a cute accompaniment but is seen by some as too nouveau riche; beer is the rule here, and never costing more than a dollar a can. (IMPORTANT ALCOHOLISM CAVEAT: Open container laws are apparently being enforced by both university and city authorities starting this year. Know before you blow.)

And if you get to town on a Friday night, keep an ear out for brass: The marching band goes barhopping, playing fight songs for free beer:

Intrepid reader Josh Sims' relations have even gotten in on the act:

Various members of my family form the "Beer Man Group" a 4/5 man drumline that marches up and down Melrose Avenue, through various tailgating yards and lots, ending at the game, marching back afterwards. Their shirts say "we play for beer." The crowd obliges. The drums have been equipped with cupholders, obviously. Legend has it that if you peer into the hole on the front of the bass drum you will see a very old playboy centerfold. So they say. 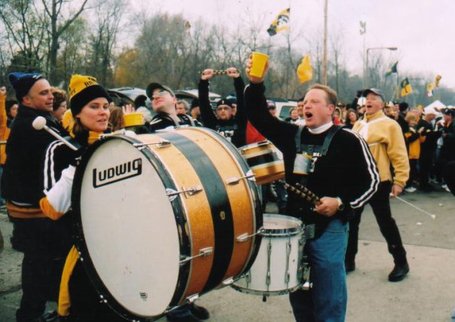 I stop by my former residence on Melrose Avenue for the poetry reading (it's not exactly Dickenson); other groups have songs or games they play weekly.

The Johnson County court system is remarkably efficient on gameday. I once had a roommate arrested for throwing a beanbag in the general vicinity of a cop; he had a bit of a history with this particular officer stemming back to a prior alcohol-related ticket. He lobbed a beanbag near the cop and was arrested at 8:00. The case was dismissed and he was back at the party before 10:00. -- Patrick Vint 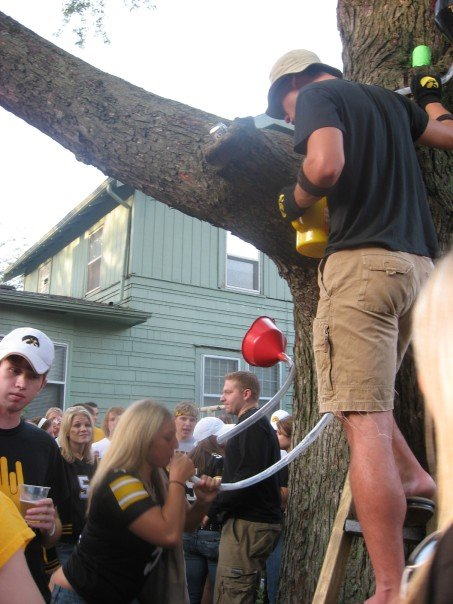 We formed an illegitimate tailgating fraternity by rearranging the letters from an established house on campus. Hazing is mandatory.

The bong was 16' long and held about 8 and a half beers. I only saw one guy take the whole thing down - and not puke. Not the biggest by any means but turns out the centrifugal force of the beer going around the tree actually "rifled" it to the mouth. Much less foam. -- ΑΘΚ Tailgating

A guy across the aisle from me was throwing peanuts at one of the infamous Permar weekender security bluecoats. Not a bag of peanuts, but peanuts themselves (in the shell) one at a time. Granted we don't boil peanuts up here so they are hard, but they're still mere peanuts.

So the Permar weekender security blue coat takes offense to being nutted and narcs the guy to the Iowa State Patrol. The officers wanted him to come with them. He didn't want to go of course. And what followed is this sequence of pictures finishing with the guy getting a double mount from the ISP. I think it ended up costing him over $800 bucks. Tough guy, though. -- Keosahawkeye 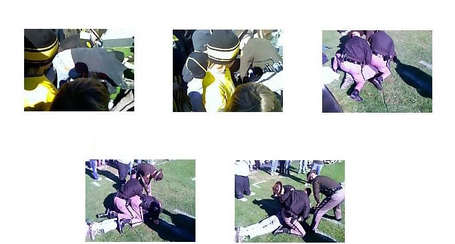 My buddy converted an old GMC 15 person van for his tailgating mobile. The signature piece is the custom welded, 47" television mount that he built, and folds up into the roof for transportation. 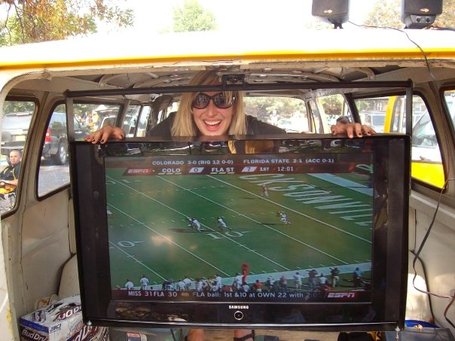 We also spent a weekend wiring surround sound into the doors, and there are floor speakers that we run the cable for to the back of the tent that is setup behind the van. He runs a portable generator to power the TV, stereo, and satellite system that is setup to catch the game live for those who do not get a ticket into the game. Later in the year, it is a great location, as we break out the portable heaters, and wrap the tents with tarps to prevent the cold from getting in. -- recoveringfratguy 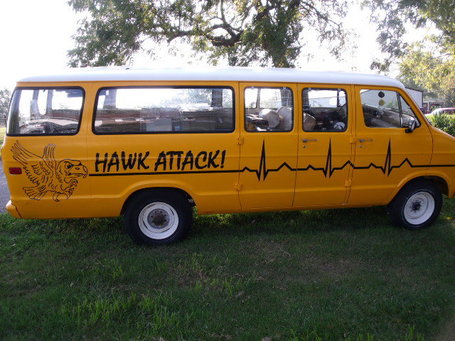 The Hawkeye Hearse. A 1969 Cadillac. Broke down on I-80...rescued, rehabbed, and retrofitted by Restaurant Russ. The casket serves an ice-cold pony keg. The Hearse is "for sale," and the deal is always the same: $5,000 cash, and the Hearse comes with a free pony keg for each of the season's home games. Interested? 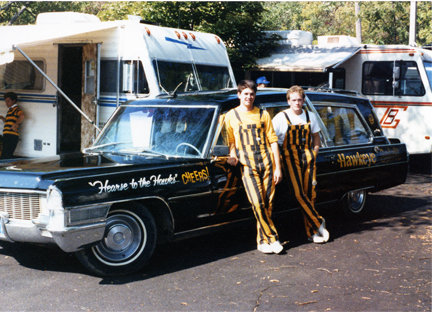 The text at the front reads "Hearse to the Hawks" and its official name is "Hawkeye Spirit." -- Josh Sims

WHERE FOR TO DRANK:
EDSBS readers recommend: Quinton's, The Airliner, Wig & Pen, Hamburg Inn, and the BIG ASS TURKEY LEG:

Innumerable thanks to the drunken genius Iowans we've encountered this week. You are legion, and you are delightful.