LINES OF THALLIUM: LINE UP AND TAKE YOUR RANDOMNESS

Share All sharing options for: LINES OF THALLIUM: LINE UP AND TAKE YOUR RANDOMNESS

Russian soldiers working at an old Cold War weapons depot in 1994 found a canister of white powder laced with this element. Despite not knowing what it was, they powdered their feet with it and blended it with their tobacco. A few reportedly even snorted it.

The element in question here is Thallium, and oh boy golly did it kill those people dead as doornails. Thallium is a nasty goo once used as rat poison, and most definitely not something to be shoved in the nostrils willy-nilly.

Let's not completely slight the intelligences of these poor, extremely dead Russian soldiers, though. They weren't mountain goats snorting and powdering themselves with just anything they found. The thallium was mixed with a white powder, most likely something designed to make thallium slightly less hellishly toxic than it was. Naturally, being bored and yes, probably not the brightest bulbs in the display case, they assumed it was a powder of some use, and then tried a number of those uses in bold experimentation.

(Unfortunately, all hypotheses not starting with "I posit that this is way toxic, and that I'll die twitching like a sewer rat" failed. Going hard like a Russian has its price.)

Laugh if you will, but you're no better off this season, college football person. You stand with the hypothetical canister of powder in front of you, and must decide how to apply its potentially toxic goo to your person.

What will decide just how much you ingest in terms of expected potential high comes in the form of your valuation in polls. Your logical brain knows the poll is essentially less a referendum on the teams that will play this year, and more of a hodgepodge consisting of:

a.) the voter's proximity to said major program

c.) random guessing based on half-remembered games from the past five years.

There is a name for people who do not do this, and it is "annoying people," because rigor and high standards irritate even the most benign person. Remember the truth of Frisky Dingo: all Americans want is cold beer, hot pussy, and a place to shit with a door on it. Everything else is pretty much secondary, and that includes questing for the perfect ballot.

The people who do do this are called pollsters, and they may be dumb like a fox in one sense: polls, being random guesses anyway, are always made poorly. We finished reading Predictably Irrational over the weekend. It is one of those breezily written economics books that comes not from the Malcolm Gladwell "Gee-you're-more-clever-than-you-thought" school of behavioral studies, but instead demonstrates just how stupid, impulsive, corrupt, and irrational you really are when asked to function in an environment involving more than two variables. (Or heaven forbid, three.) 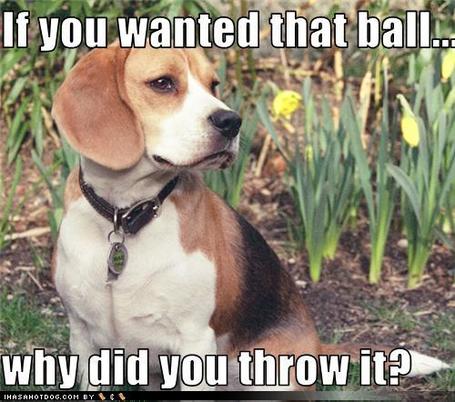 Logical dog: he understands none of your weaknesses.

The concept of arbitrary coherence comes in at this point. Arbitrary coherence is the principle that, once you accept a certain price or value for one thing, you begin to immediately arrange other price points around it. (Ariely's best example is Starbucks, though ours would be anything in Las Vegas, i.e. when you lose $200 gambling, $85 for a splashy consolation dinner seems like a pittance in comparison.)

Polling is all about arbitrary coherence: you pick one point, and then begin to arrange your anticipated world order around that axis. Like it or not, a poll matters to a fan emotionally thanks  to their own stupid, unchecked expectations ordering things often without their conscious knowledge. Try and shake the ranking as much as you like, but when Ole Miss lost to South Carolina at the four spot last year, even those Rebel fans who knew the team sat perilously overranked felt the sting of what they knew to be an unrealistic number.

Much like pricing experiments involving students being asked to think about their Social Security Numbers beforehand, once you hear that number--even if discounted--it affects the expectations for the season, and your emotional reaction to it. Being number one might be a curse for a number of reasons, but the most irrational and adhesive is the number itself, since even after it's demonstrated to be clearly inaccurate the brain clings to it. Like a home owner who bought too high and is forced to sell, the bottom--even if price-appropriate--feels less "accurate" and more "punitive" than it would otherwise.

Thus the thallium reference. Alabama, Ohio State, and Florida fans are all, whether they like it or not, going for the full guessing snort here. Whether we get baby powder or aerosolized polonium is all a matter of chance, ultimately, but disappointment will be the first course. We were expecting x; we received y. And yet with Y in possession, x still sits haunts the brain, even if, say, that anticipated National Championship High ends up in something as pleasant as the Sugar Bowl.*