WE DON'T NEED NO WATER. Via Smart Football: THIS IS THE MOST METAL FOOTBALL GAME EVER. 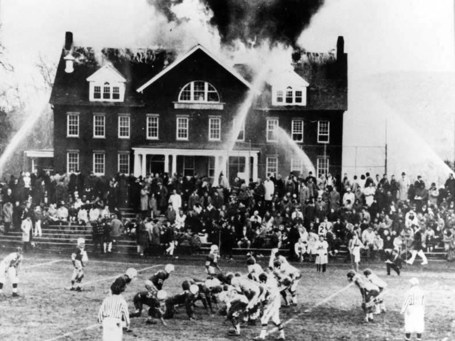 AND IT'S PROBABLY A GOOD IDEA ESPECIALLY IF YOU BLOG YOUR SEXUAL ENCOUNTERS. Chris Petersen has banned Boise State players from Twitter, and for entertainment purposes this sucks. Other coaches will see it, imitate it, and then we will have a dearth of the fastest, strongest, and often not-so-brightest 18-22 year olds detailing their intestinal and genital fortunes on the internet.  For coaching purposes it's certainly sensical, especially since Chris Rainey could get on Twitter one day, and then we'd see exactly how much PR damage one man could do in under 140 characters.

MANDATORY MENTION OF TWO THINGS. Emmitt just forgot, y'all, and if it offends you yay rage fuel for you. We like to get mad at the things that really matter: uncooperative inanimate objects like the dryer we stubbed our toe on this morning. Take that, dryer! [/breaks toe on dryer.] And yes, Tebow got a haircut. You know who's tired of talking about Tim Tebow, and would like nothing more than to have a satan-worshipping qb with the ability to read defenses? WE ARE AND DO.

MICHIGAN ALABAMA IMMINENT OR NOT OR DAMN YOU LAWYERS. Michigan will play Alabama in 2012.  Or they won't. Or we can all just quit pussyfooting around and acknowledge that the two schools are waiting for the Mayan calendar to run out before doing any scheduling of the sort, since the end of the world would take precedence over college football. (Barely.)

HE'S NOT A GOOD KI-YUD, OBVIOUSLY. Jimbo Fisher does not take to the old FSU "Good Kid" exemption, booting wide receiver Jarmon Fortson from the team for failing "multiple" drug tests. This is not exclusive to Florida State, but in general testing protocols are so clearly demarcated and scheduled at most big schools that "multiple" equals "fifty failed drug tests." It's really more of an IQ test after a certain point, and one Fortson (who was going to be a significant part of the FSU offense this year) clearly failed.

QUICK QUIZ IS GREGG DOYEL OFF OR ON HIS MEDICATION? If you said "Off, and currently calling Best Buy to scream at a customer service representative for 45 unhinged minutes about the lack of character in the HD cables he bought for his flatscreen," you win the heaviest present of all: NOTHING.

YOU OVER THERE DO LESS. Tommy Tuberville has a deadline on deciding a qb at Texas Tech. "I'm looking for the quarterback who reminds me of a young Ben Leard, or perhaps of a more arthritic Brandon Cox." /texastechfansvomit

AT THIS POINT IT'S JUST DUCT TAPE AND FOUR RUBBER BANDS. The answer for how many torn ACLs will end a football career varies, but for Colby Erskin of USF the answer is somewhere around four. Frank Gore even stands agog at your persistence, and at the amount of corpseflesh that your body can handle without rejection.

THEY REMAIN THEIR MEAT. Delightful business and exceptional captioning from Bring us Your Champions, They're Our Meat.