ESPN released their announcer pairings, an annual rite determining an important quality of life issue for the college football fan: the people who speak words, noises, and occasionally read the rosters aloud over your broadcasts. Broken down by the Beaufort Scale, which appropriately measures the force of the wind on a one to twelve scale.

ZERO: CALM.  Brian Griese will be sedately serving up his family-style tacos stuffed with colorless analysis with play-by-play man Bob Wischusen for ESPN2's early games. THE Bob Wischusen? Thassright. Pop some bottles, because when you invite Wischausen, you've already committed yourself to the afterparty, the after-afterparty, and the celebratory Griese tacos afterward.<---could not pick Wischausen out of a lineup. 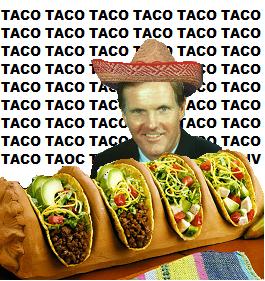 That is Bob, not Brian, but taco pictures take precedence over sense or logic.

They'll be doing the Bloody Mary games, so Michigan State and Indiana will have the snap, crunch, and delicious meaty filling you've come to expect from Brian Griese-narrated affairs. (And like Taco Bell, will leave you vaguely dissatisfied and ashamed of yourself.)

1: LIGHT AIR, RIPPLES WITH CRESTS ON THE WATER: Pam Ward and the Slumbertonez have been bumped down to ESPNU, where they will work the nooner with new analyst Danny Kanell. Awkward sexual tension to follow? No, we're sorry: you must have this confused with the Mike Patrick/Craig James pairing, which does/will contain tons of simmering and forbidden passion. Bonus for people who hate Pam Ward: she's no longer on ESPN [Numericals,] and thus off the basic cable run of easily flippable consecutive channels.

2. LIGHT BREEZE, BLOWIN' TWIGS AROUND: Mike Bellotti will debut as an analyst, presumably smoking cigars on air lit with the money he took on the way out of Oregon. Brock Huard and Carter Blackburn are his partners. Predicted on-air banter: making fun of someone actually being named "Carter Blackburn," and his resemblance to Chuck Bass.

3. GENTLE BREEZE, MAKING YOU FEEL FINE: Beth Mowins, who is NOT PAM WARD, will work mid-week games. This means hot MACtion for you lady, and you will like it. David Norrie or Robert Smith will do color with her depending on availability, meaning you will want to watch the games with Smith just to see if he continues his annual rite of publicly calling someone a dick. (Smith will jump on the freaky tangential on-air every now and then, and for that we thank him.)

4. SOMETHING LIKE WIND, BLOWING PAPER AROUND: If Rob Stone is getting a play-by-play gig, then good for him. David Pollack is largely inoffensive in color commentary, and will be relieved to have a broadcast partner who does not use the word "Jap" on-air. (Unlike his ATL radio partner Mike Bell.) (Though Rob Stone could develop a sudden streak of anti-Asian sentiment, especially if cheap steel from China kills his grandmother.) They've got the ESPNU games at noon, but it's a living.

5. FRESH BREEZE. Is his exile over? Did he submit to the obscene, unspeakable sexual torture rites administered by ESPN higher-ups in torchlit cloisters by men in opera masks and red robes? Paris is worth a mass, and having Ron Franklin back would be worth a ruined ass, since he is listed as a returning announcer and, if there is any justice on this harsh prairie of existence, will be calling games of significance (i.e. not late November Big 12 games) on Saturday afternoons.

That ESPN still has Mike Patrick and Craig James calling some SEC night games is an obscenity, but progress is always an incremental thing while disaster happens all at once. We all know that's still Ron's seat, and everyone else is just keeping it warm for the Silver Fox's magnificent ass.*

6. STRONG BREEZE BLOWING HOT FROM THE BOOTH. Davie Jones' locker returns as Bawb and Mark are paired yet again in the dark, cold place beneath the waves where good announcing is drowned and fed to heartless crabs and their clicking pincers.

7. MODERATE GALE: Wendi Nix will anchor ESPN2's festivities, and she will wear the glasses to look like the naughty librarian why yes we did check out The Story of O and yes, it is overdue and you might have to punish us for it AND WE'VE SAID TOO MUCH.

Rob Stone: "Back to the studio, and hey! Herm! What do you think of that Michigan State interception there?"

At the very least it will be fun, because Herm Edwards swats invisible flies away from himself on camera.

10. STORM: Erin Andrews will become a correspondent for the new three-hour long Gameday, and thus increase Gameday's ratings among the Pod People Who Stalk Erin Andrews demographic.  Corso is also listed on the two-deep for Gameday's returning roster, setting the stage for the world's most awkward interview ever when he and Joe Paterno set a record for most uncomfortable old person rays emitted in a single broadcast.

11. VIOLENT CRAPSTORM: Craig James and Mike Patrick are together after spending the Alamo Bowl openly stumping for Ruffin McNeil to take the job at Texas Tech and reading James' lawyers' talking points on air. This is because someone, somewhere at ESPN hates you. Do not forget this.

12. HURRICANE-FORCE AWESOME: Rece Davis joins the Boys' Club Crew on Thursday nights, where Craig James does what he does best: saying "WOOO!" while other people do the talking.

*Yeah, I said Ron Franklin has a great ass. A man with a voice that sexy has to, dammit.