Stephen Garcia reported to Gamecocks spring practice at a svelte 227 pounds. You're saying a few things reading this: Stephen Garcia is thick. Yes, in more ways than one based on his onfield decision-making at times. Stephen Garcia, by implication, must have been thick-er prior to this. Yes, yes he was. How did he attain this marvelous weight loss? Did he use the Matt Grothe "I'll stop eating at Chick-Fil-A every day diet? No, dear reader. He did something far, far more difficult. 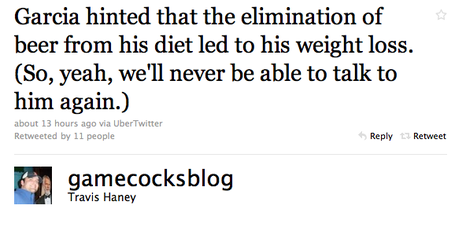 Settle down, he's legal, 21, and Amurrican, and that means it's beer on when he's not trying to lean out this Victory Panther he's about to unleash on the SEC. Holly's flipside universe call of South Carolina vs. Arkansas for the SEC Championship just got that. Much. Closer. You want demonstrated commitment and maturity, Steve Spurrier? THE MAN'S CUTTING OUT THE PABST JUST FOR YOU. Just love him for once. That's all he wants.