Share All sharing options for: MUSTACHE WEDNESDAY: THE WANNSTACHE AND DORK SABAN 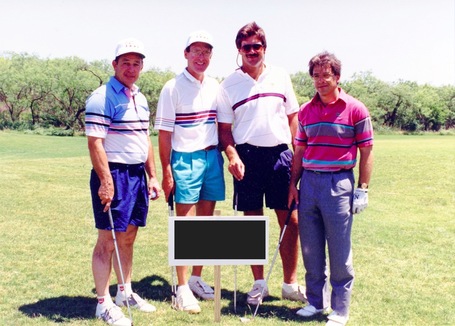 If you asked Dave Wannstedt to join you for a foursome this weekend, he would show up naked wearing a Mardi Gras mask. When you explained to him you meant "a golf foursome," he would say "oh," and it would be awkward, but he would probably go home and put on that exact outfit complete with Blu-Blockers and drive back in his smoking Camaro. Night Ranger would be playing. Most likely "When You Close Your Eyes." He'd have an overbite going with the head bob, and let the t-top blow his hair dry.

Saban, on the other hand, looks like he just raided Steve Wozniak's closet for clothes. Guys, I'm not really that good at golf, but I can solve Zork in 83 steps. If the lady selling beer out of a golf cart did not card him, then she clearly failed the state liquor laws of whatever state this magnificent photo was taken in years ago.