THE EDSBS CAVALCADE OF IRRATIONAL ENTHUSIASMS, 2010

Share All sharing options for: THE EDSBS CAVALCADE OF IRRATIONAL ENTHUSIASMS, 2010 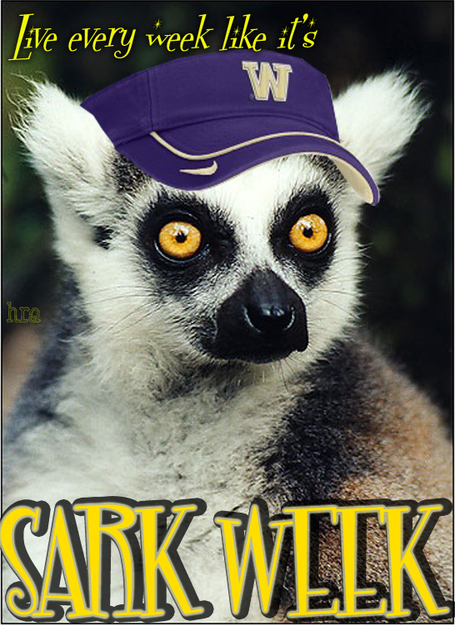 Orson: We begin this process by claiming an only-slightly-rational flyer on ownership of SARK WEEK, the season-long programming detailing the feeding habits, savagery, and bloody conquests of the Washington Huskies. Once a season you must make at least one balls-out wager to keep the blood pumping and the fear gland on its toes, and this is ours. Glands have toes. Don't even attempt to argue this point.

Holly: I select my batshit SECCG pairing of South Carolina in the East and Arkansas from the West. When I made this selection earlier in the summer, it was one of mirth, because all I really wanted was to see Spurrier win the big one and amble off into the Augusta dunes knowing his final glory came at the hands of Stephen Garcia, but the more I think about it, the more it isn't all that implausible. Also, Steele said on the radio the other night that he thinks Sakerlina will surprise a lot of people, and I don't think he meant,"Surprise! Columbia's been sucked whole back into the hellmouth from whence it came!"

Oh, and let me add that neither team will get in unscathed, by which I mean, "Arkansas will be undefeated when they lose to UTEP."

Orson:  For my second draft pick, I place hands upon Kale Pick, Kansas' starting quarterback, and pronounce him the signal-calling mascot of arbitrary delight for the year. Inheriting the Todd Reesing Chair for Quarterbacking, Zesty Living, and American Flag Jacket Studies is a tall order, but the young man has so much suggesting he's more than capable of succeeding Reesing.

He can scramble, which is good since he'll spend a lot of time running for his life.

He'll have Todd Reesing's magic jacket, bequeathed to him in a dark, often disturbing ceremony performed under candlelight in a stone-walled chamber beneath Kansas' locker room once used to house Mark Mangino's spare hogsicles.

Holly:  "This is the dead man's jacket"  [eats peeled grapes]

This is more than enough for us. Make us proud, young man, and one day we'll mention you in the same breath with puppy-loving, all-American of your heart President Reesing

Holly:  I select Foswhitt Whittaker, RB, Texas, who will be blossoming into a star just about any day now. Texas has to stumble into a real running game one of these days by accident if nothing else, and why not in the name of a bro named Fozzy? He's eensy, too, so the holes he'll need through opposing lines won't have to be that big (and won't be that big, if they materialize at all). In two seasons of play, he's never broken the 300-yard barrier for the 'Horns, but I maintain faith, because, again, his name is Foswhitt Whittaker.

Orson: Before we advance too far, let us also mention that Pick will be handing the ball off to a teammate of living anagram Toben Opurum. He may be just a simple Big 12 running back, or he may be a member of Quantum. There's really no telling, but his name is also the most anagrammable name ever. A few choice selections:

Orson: The third spot is reserved for the Western Kentucky,  whose website is accurate: they are chasing greatness, on crutches, mostly as it speeds away into the horizon while they hobble along. Note the huge amount of space between "chasing" and "greatness," and know that web designers will always have their revenge if you get stingy in contract negotiations.

Holly:  You don't hate them for firing Dave Elson? And for their mascot?

Orson: We  do, but we're watching for the spectacle of seeing how long they can keep this thing going.  It's a bit like watching horses in a barn fire. I know they're going to show signs of escape, but ultimately bad football teams run back for the barn of doom every time.

I could say I'm rooting for them, but that would be a lie. We'll be watching to see just how much punishment one team can take. It will be like watching a female character in a Lars Van Triers movie: she will suffer, she will suffer some more, and then she will die on a very low budget.

Holly:  I'm amazed von Trier has not made a sex movie with Big Red. 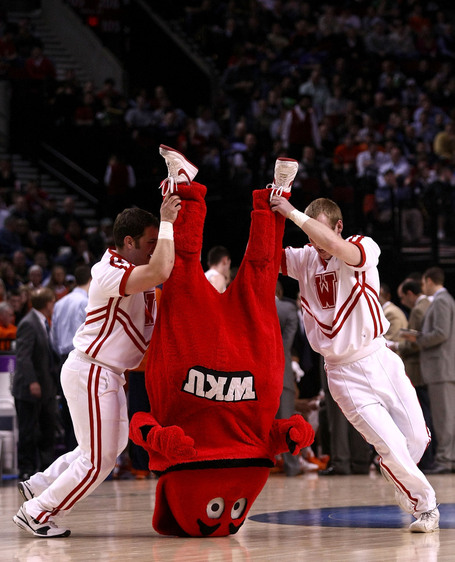 And Little Red, just to ensure I never, ever close my eyes again.

Orson: Don't think about who's the bottom there.

Holly: STOP THAT.  Last pick: Houston as this year's mid-major press darling (Boise State's done ascended and they'll need a replacement dark horse). They've got a new OC, but I'm not sure how much retooling he'll have to do when they also return all three 1,000-yard receivers, two 100-catch multipurpose running backs, and Case Keenum to throw to them. The non-con slate includes UCLA, Missy State, and Texas Tech; that's three hefty scalps to he holding by the first of December. This kind of thing hardly ever works out in real life, but with so many offensive talents returning, this may be that rare team that really and truly does not need defense to win (good thing, too, since they ain't got one).

Holly:  Rece! Welcome, Rece.  Glad they let you out the studio.  He'll seem all the more majestic for being Craig James-adjacent

Orson: Joe Tessitore and Rod Gilmore, if only in vague hope they will storm a dorm, get roofied, and call an entire broadcast of Fresno State/ Boise State in this condition before waking up 200 miles away at an Indian casino covered in someone else's blood and unmarked bills

Holly: I can almost identify Tessitore by sight now, which has to be nice for him.

Orson: They're the one announcing couple I'm starting to see as a stable, happy, and mutually respectful couple.  They restore vintage Craftsman homes together. They share nutritious light lunches and nod appreciatively at each other's statements.

Holly: Rod pees with the seat down, and Joe totally respects that.