BRIAN KELLY HAS A DISCUSSION WITH NBC SPORTS

Share All sharing options for: BRIAN KELLY HAS A DISCUSSION WITH NBC SPORTS

So, you're saying a 14 minute commercial break is out of the question? i don't see how, Coach Kelly, but if that's what you want, it's yours. We're committed to Notre Dame as a brand, so we're willing to cut our breaks to a reasonable 8 minutes just for you.

Im gonna need to get those to 1:45 at most, Dick. we can't just sit there that long. It's not how we play at Notre Dame.

Okay, okay, how about six minutes and free Notre Dame promos  during the Olympics. It's the Olympics, Coach Kelly! The biggest sporting event in the world! Think of the international exposure! All of Japan will be watching. It's gonna be their century, you know. I read this fascinating new book called Rising Sun about the whole phenomenon--

We're snapping the ball after a minute and forty-five seconds. Come back whenever you like, but that's the way it's going.

Fine! What are you going to demand next? A third camera on the field? An end to live commercials? ARE YOU GOING TO DEMAND THAT WE STOP ADVERTISING FOR THE NEW SMASH HIT BJ AND THE BEAR?

I don't even know what we're taking about here.

We were going to have the monkey on the sidelines wearing an Irish cap with Morgan Fairchild. I bet you don't want that to happen, either? And you don't want him calling plays for a series either, I bet?

Dick, Charlie let Jon Bon Jovi call the entire second half of the Pitt game last year, Dick. I don't know if we can do worse than that. And I'm not exactly current on my tv, but I'm pretty sure BJ and the Bear was cancelled thirty years ago.

We'll have to agree to disagree on that point. America just loves chimps, semi-trucks, and freewheeling American fun. That's what I know.

I'm gonna need one other thing. You have to do something about...him.

I'm sure you're right, Dick, but he's distracting to the players. Just watch this footage from last year. 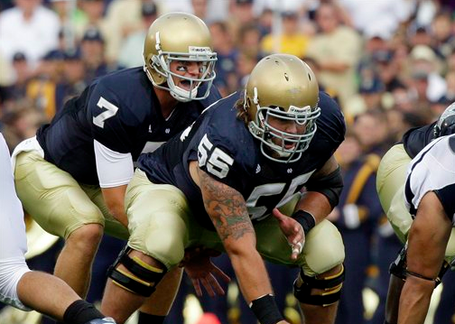 Clausen looks up at the stadium lip, his face the very picture of fright and distraction. 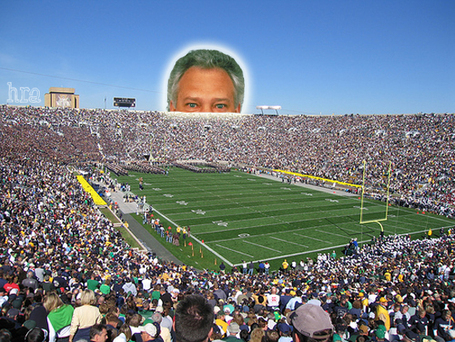 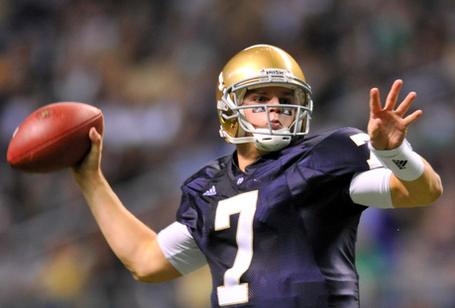 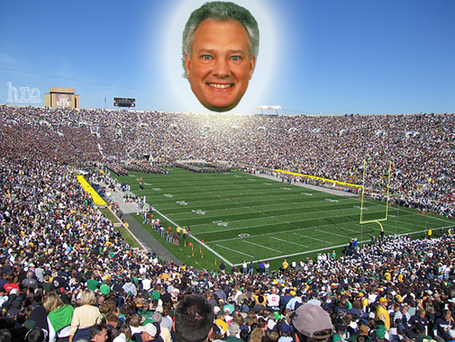 AND CLAUSEN HAS A MAN OPEN!!!! THE IRISH MIGHT BE ON TO SOMETHING HERE--- 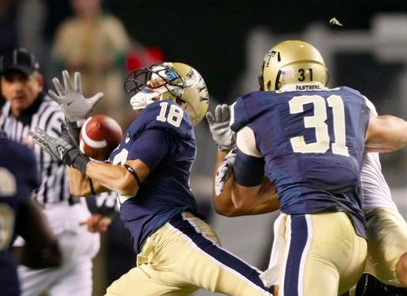 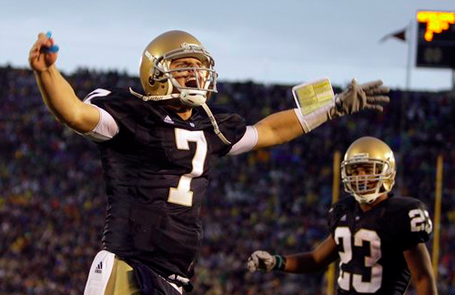 Could you tether him somewhere else? Maybe like a blimp over the stadium or something, and ask him to keep it down? My players can deal with a lot, but he doesn't even have a body or anything. You have to admit that's freaky even for tv people.

He likes being there, Coach. How can I tell him no? Plus, we're all too terrified to look him in the eye, much less talk to him. Frankly we don't even know how he works, what he eats, or what kind of life form he is. He just shows up for games. We've never even paid him, actually. I don't know if he can use money.

You've got to do something.

I'll try, but the real sting will be the lost ad revenue from billboard sales on the back of his head. That thing is huge.