For maximum effect, this should play in the background of this post. 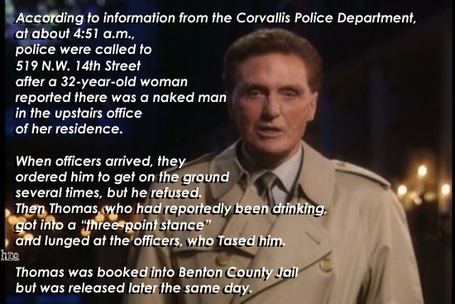 Yet we have not seen the best from Oregon State's Academy of Fun Manufacture...until today.

According to information from the Corvallis Police Department, at about 4:51 a.m., police were called to 519 N.W. 14th Street after a 32-year-old woman reported there was a naked man in the upstairs office of her residence.

When officers arrived, they ordered him to get on the ground several times, but he refused.

Then Thomas, who had reportedly been drinking, got into a "three-point stance" and lunged at the officers, who Tased him. Thomas was booked into Benton County Jail but was released later the same day.

We're not even going to worry about Fulmer Cup points for the moment. Sometimes, quantifying something cheapens it. Attaching a number to getting tased naked after pass rushing the Corvallis police in a strange apartment is one of those moments. Just appreciate the grandeur of the moment here, and the skill of an artiste at work in his finest medium.