He's about to apotheosize into the larger Valhalla of popular camp, but before he does that completely (portions of him are already there) consider the Horatio Hornblower saga of his life: in and out of jail for much of his adolescence, bound for some level of success as a boxer before an armed robbery charge landed him in the joint for real, and then deciding to kickass no matter where he was by becoming the Cal State Penal League Lightweight and Welterweight champion while still in prison. Consider where this leaves us: at the end of this paragraph, our hero is already the baddest man alive in prison.

Trejo then somehow goes from 12-step recovery program member to boxing coach, and then looks so fearsome in person a director hires him to train boxers in a movie, and then casts him to fight Eric Roberts in Runaway Train. Roberts' career suffers greatly after Trejo kills him with a single punch in a rehearsal, but the reshooting around dead Eric Roberts' propped-up corpse and the resulting insurance claims are deemed worth it by director, producer, and all who behold the scene. Danny Trejo killing Eric Roberts, they all agree, will be the most beautiful thing they have ever seen.

Then Trejo begins his life as a movie star by starring in many wretched installments of a neglected but majestic film genre: prison movies made from 1985-1995.

Trejo has a tattoo of a woman wearing a sombrero on his chest. He has a face that Robert Rodriguez called "made for high-def." His Mexistache is the recognized Platonic ideal of the wispy Mexistache, and is that thin because when you're Danny Trejo, seventeen well placed hairs do the job of three hundred normal man-hairs.  His role in Spy Kids is genuinely funny despite the mortal fear that he might erupt and rip the children limb from limb as an object lesson on the need for population control.

He's on the Young and the Restless now, which now features three murder scenes a show just to accommodate the minimum killing scenes required by contract in any business agreements with Trejo. He is a badass, and that is before he rips through theaters on a motorcycle with front-mounted gatling gun attached. Salute: you may be Machete to the masses, but you'll always be Geronimo from Bound by Honor/Blood In, Blood Out to us.

Programming note: Fearless Leader is on a plane to the Panhandle for reasons we're legally bound from revealing [coughbabyMagnusgettinghistuskswhittledcough]; in his absence, please welcome debonair EDSBSbro Doug Gillett.

Holly: Sweetwater Motor Boat. As our offseason Digi-Vike-ing pleasures wind down and we gear up for the season, we're focusing exclusively on the joys of August and wringing every drop of spice from life before the grind of wall-to-wall beautiful game coverage. This late-summer seasonal offering hits a trifecta of EDSBS sweet spots: 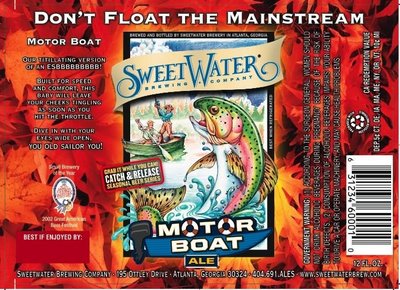 Doug: Found a new kind of beer at Green's a couple weeks ago. And now I can honestly say that when I'm stressed out and I've had a difficult day of work, there's nothing more satisfying than getting home and immediately sitting down for a nice, soothing Porkslap. 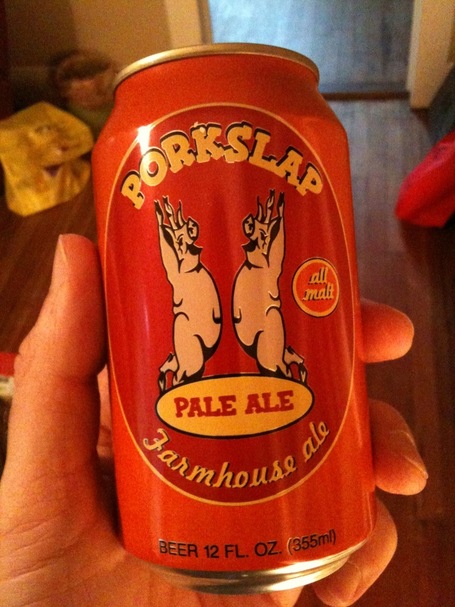 (All innuendo aside, it's actually pretty good beer.)

Doug: When I was like ten years old, my dad took us with him to Hilton Head, where he was attending some big medical conference. We were staying at one of the swankier places on the island, and there was a huge spread at the reception on the first night of the event, during which my dad handed me something that looked like a petit-four with a little piece of beef or something embedded in the middle of it. Only after eating it was I informed that I'd actually just consumed a snail, and while I wanted to be outraged at this deception, I had to admit that it was . . . pretty tasty, actually. 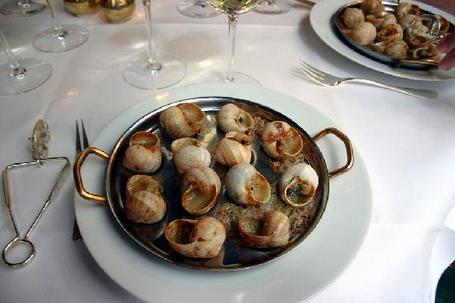 Now, rich people eat some incredibly heinous shit just for the sake of showing everyone else how much money they have to burn. (You can't tell me, for example, that anyone has ever eaten caviar for any purpose other than to proclaim to the world LOOK AT ME I'M EATING CAVIAR. If you actually claim to like the taste, just eat a few tablespoons of fish oil and a heaping cup of salt; it tastes the same and is way cheaper.) Escargot, though, is legitimately delicious. I prefer it stuffed in mushroom caps, sauteed in garlic butter, but a true expert in the field of gastropod consumption won't shy away from plucking them right out of the shell. Harder than it looks, but so worth it. 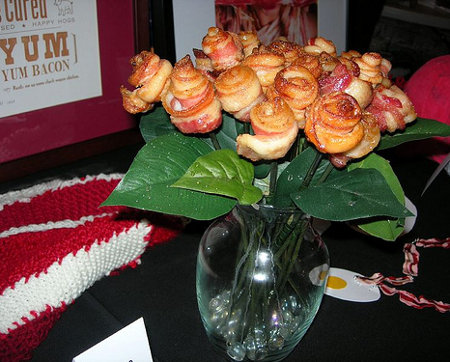 When we saw this pop up on This Is Why You're Fat, we knew we'd heard tell of it somewhere before, and lo! A step-by-step instruction kit for making your own "bacon broquet." (That's what it's called. We are messengers. Do not shoot.) Geekologie wraps it up beautifully: "It looks like flowers, but that shit is bacon!" In-deed.

This is not a suitable last-minute gift, mind, unless you've got a couple hours to kill. Cooking will require low, slow heat to avoid crisping and crumbling, and there will be greasy fingerprints to wipe off whatever vessel they're going in, but it'll be worth it to fill your sig other's cubicle with the aroma of delicious pork fat. (Stop that.)

Holly: The last weekends of summer are also an ideal time to burn off all those extra depth charges you've got lying around.


Doug:  Man, how often do you see this happen: two kids screwing around in dad's Su-30MK fighter jet, don't know what they're doing, push it just a little too far, and all of a sudden insurance companies are getting involved . . .

Holly: The airboat, official transport of the EDSBS Intramural Bowhunting Squad, which needs no further introduction because we are genuinely baffled as to why we've never honored the airboat in this space before. Perhaps we simply take its superiority to all other forms of transport as unspoken natural law, like gravity: 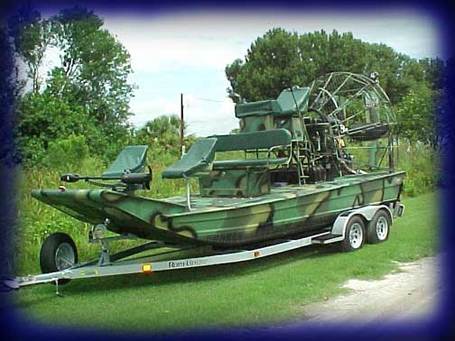 FUN AIRBOAT FACT: Alexander Graham Bell had a hand in building the first turn-of-the-century contraption, which looked pretty much exactly like the ones you see today.

Doug:  There are faster cars, there are more exclusive cars, there are even better-looking cars, but the Ferrari 308GTS will always be at the tippy-top of my Favorite Cars To Do A Handbrake Turn In list. 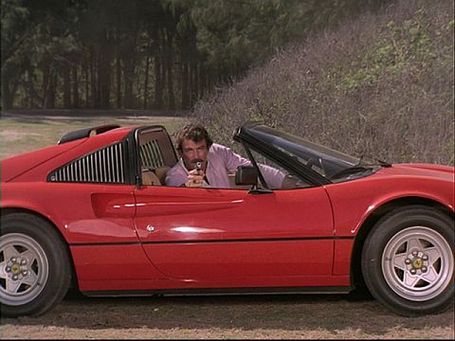 I've got a Hawaiian shirt, I've got a mustache, I've even got a friend in Hawaii -- all I need is a tomato-red 308 (and some conspicuously short khaki shorts) and I'm all set.

Doug:  If you haven't heard of Richard Cheese, an entire part of your life experience that could be providing you endless joy is missing. Richard Cheese is a singer who, together with his backing band Lounge Against the Machine, does lounge covers of popular rock songs (and even a few hip-hop numbers). It's kind of like if Bill Murray's "Nick Winters" character from the early SNL episodes was a real guy who put out albums, which might not appeal to you in the least -- but rest assured the man can sing, and even mambo:

Please go buy this gentleman's records post-haste so that he never, ever has to get a real job.

Holly: Open Water. "It is one thing to be in danger of losing your life. It is another thing to have hours and hours to think about it, and to discuss how casually the Caribbean vacation was settled on, instead of a ski holiday." -- Roger Ebert.

The entire ordeal lasts not much more than an hour, but that's a long time to have to dig your nails into your palms. This is one of those movies that I both love to distraction and will never, ever watch again because it causes me genuine emotional distress. Filmed in real open water (sorry) with real actors surrounded by real sharks, Open Water is like Waiting for Godot, only with bloodthirsty sea creatures and fourteen times as entertaining in a third of the runtime.