THE DAY I CAN'T GET YOU GUYS TO GET IT RIGHT I'M GONNA GO TO THE LAKE SIT ON THE DOCKS AND WATCH THE DUCKS SHIT IN THE YARD. Alabama walk-on wide receiver Rob Ezell's imitation of Nick Saban contains much greatness, but it's the commitment here that makes it. If you're going to risk your life making an imitation of someone who could have you greyshirted KGB-style*, you go balls-out and hope the king finds your treason amusing.

The wide open eyes, flopping hair, and rasp in the voice all contribute to the illusion that Nick Saban's bastard son has indeed donned UnderArmor and is addressing the team. As Youtube commenters point out, this happens at :34: 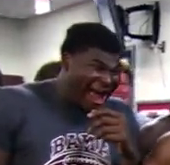 This bit of levity should blunt the sting of the news of incoming freshman LB Alfy Hill coming up an academic nonqualifier. We're sorry, correction: he's "dumbshirting" this year.

FACEPALMS NEEDED. Will freshman Conor Shaw play against Southern Miss? Does Steve Spurrier have a quarterback on the bench? Is the the one not named Stephen Garcia? Will he play him in the first five offensive series? Is there candy over on that tabel over there GIMME GIMME GIMME---

NO THANKS WE LIKE THE SOUND OF HOWLING OBSCURITY. Utah State was not "selfish" and turned down an invitation to join the Mountain West, which was not "selfish" and definitely not "money kind of smartish" since they now sit in a six league conference whose primary draw will be the four games they might get to play with the Notre Dame of the Wasatch. The matchup with Hawaii, complete with crippling air travel costs, is still intact.

YOU BITCHES ARE ALL IN TROUBLE NOW. Destiny simply couldn't let quarterback with the last name Pick not start at Kansas.

IOWANS PROTEST AGAINST RESTRICTIONS ON ALCOHOL AND RIGHTLY SO. Tailgating crackdowns will swamp local jails, something the university didn't even bother discussing with the local sheriff. The game mentioned as an example of previous overflow of drunken inmates guilty of tailgating: the Ohio State game, naturally. The SEC's solution for this is to contract out with adjoining counties, as with Knox county's agreements with other jails that leave three counties of prison space full after the biennial Tennessee/Florida game in Neyland.

After the jump please find a random UL-Lafayette ad made with the sound effects from an iPhone, a tribute to our recent endorsement of the Sun Belt as the official conference of the RonP NCAA 2011 League. WARHAWKS FOREVER!

*He's a walk-on, yes, but we will not let your petty details get in the way of a Nick Saban greyshirting joke.