BOYS OF FAIL, OR WHY KENNY CHESNEY SHOULD BE BEATEN WITH STICKS

Share All sharing options for: BOYS OF FAIL, OR WHY KENNY CHESNEY SHOULD BE BEATEN WITH STICKS

Kenny Chesney and all he stands (shortly) for is an avowed enemy of EDSBS and children's singer. He has, for reasons known only to ESPN's evil demographers, Satan, and John Bodenheimer, attached himself to the face of ESPN's coverage of college football like a cornpone facehugger bent on impregnating the body of the sport with bland tales of faux country imagery.  To prevent this from happening, we take a flamethrower to Chesney's song and video, "The Boys of Fall" in the latest installment of "Kenny Chesney Should be Shot Into the Sun For the Good of Humanity."

He sucks, and most things do, but when he dips his toes across into the realm of football they deserve to be chainsawed off at the nearest convenience. The entire song is supposedly about football, but it's really about how Kenny Chesney should be bound and gagged, bundled into an uninsulated rocket filled with honey badgers, and shot into the sun. Oddly enough, this is what we think every Kenny Chesney song is about. Hm.

The video makes the first mistake right off the bat: YOU PUT PRO FOOTBALL IN OUR COLLEGE FOOTBALL.

This is putting Ganesh into an alcove at the Vatican, or installing a crucifix at the Golden Temple, or painting a thousand-armed Tibetan demon on the side of Temple of the Mount. It's mixing your deities, and when you do that it's blasphemy in a manner indicating a.) whorish inclusion of all demographics in a single attempt to market to all, or b.) ignorance. We'd bet on the latter if Chesney weren't obviously an actor hired to play a marketing construct, and was in fact a dwarf from Ohio named Neil whose talents include lip-syncing and wearing a hat.

What else doesn't belong in this video with your tiny horrible cougar-scratched ass, Kenny Chesney? Barry Switzer, that's who, asshole. 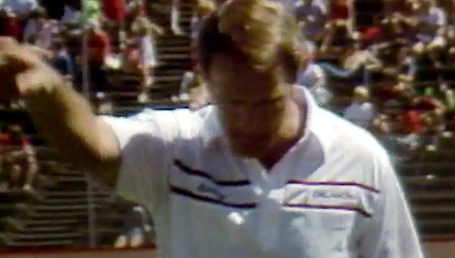 You can include any number of guys harmonizing nicely with your chill-as-dead ass, Chesney, but not Switzer. If you use Barry Switzer in a music video, there must be some hint of smoky danger somewhere in the music. He could have been in Hank Williams, Jr's original video for "All My Rowdy Friends," preferably doing something like watersliding nude into a pool full of models or drinking a beer out of a boot. We can't say for certain this was not in the actual video, or on the cutting room floor, and choose to believe it as mythos-become-fact.

It's blockquoted so it must be fact:

Barry Switzer was in the video, and he ate a piano on-camera and shat out a moving rendition of "Boomer Sooner."

That really happened, and here is the source.

When I feel that chill, smell that fresh cut grass/ I'm back in my helmet, cleats and shoulder pads/

Wearing nothing but that, and standing on the edge of Peyton Manning's bed as he and his wife sleep peacefully and Chesney watches. You can block my number, Peyton, but you can never call the right protection against love.

Chesney is completely unfamiliar with the state of most high school secondaries, or Michigan's for that matter.

Took every ounce of heart and sweat and blood/ To get to wear those game day jerseys down the hall/ Kings of the school man, we're the boys of fall/

Whoa, wait. The King of Our High School was a black dude who hung out playing craps in the bathroom named 'Toine. He sold weed, never went to class, had endless sex with every girl in the school with zero self-esteem, and once stole our bookbag and returned it saying, "Man, I'm sorry, you got nothing but some books and trash and shit." 'Toine was the coolest, and would have been elected Homecoming King if he hadn't been arrested for stealing a car when he was a third year sophomore. Feared, respected, nay--one might say even loved, in a kind of "please God, don't hurt me way."

Football players as monarchs, our ass. 'Toine ruled the school and didn't need a jersey to prove it. All he needed was an ankle collar and a Swisher Sweet for a scepter. Football players could lose things: their position, their potential scholarship. 'Toine didn't have anything to lose, which is why we paid him twenty dollars to wing a volleyball at Coach Dyer's balls one day. He did it. Why? BECAUSE A KING LOVES HIS PEOPLE, that's why.

Well it's turn and face the Stars and Stripes/

It's fighting back them butterflies/

It's call it in the air, alright yes sir we want the ball/

Frank Beamer wants to slap you so hard right now. The wind. THE WIND! You have to build this game around the kickers, dipshit!

It's I got your number, I got your back when your back's against the wall/ You mess with one man you got us all/

"Man, I don't know if we can take this team.

"I think it just ate Chesney."

There's just a computer in Nashville that belches out phrases like this all day. The Anodyne 3000, kept in a nitrogen-cooled vat fifty feet beneath the surface of the earth, just spits out BARBECUE BABY LIVIN' WORKIN' TRUCK TRACTOR SMALL TOWN HARD TIMIN'. It's like the computer in Portal, but way more evil since it wants to kill you and make more Kenny Chesney songs. Mankind cannot be truly free until it is destroyed.

In summary and in a repetition of an oft-repeated but necessarily reiterated sentiment here, Kenny Chesney should be taintpunched for making a song that should have tugged at our most vulnerable heartstring and yet still somehow failed. You want to know how to do that? Like this:

If you'll excuse us, we have to go hug our Steve Spurrier-shaped body pillow now just to feel whole again.

p.s. Kenny Chesney should be shot into the sun.